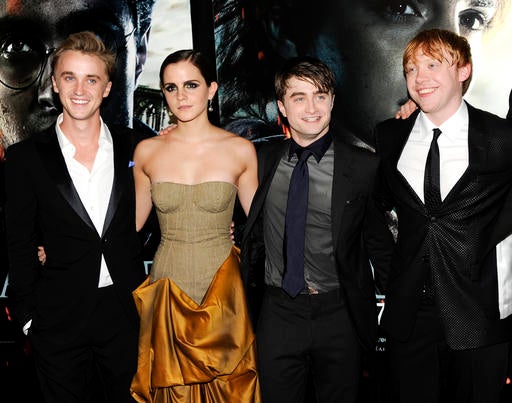 In this July 11, 2011 file photo, cast members, from left, Tom Felton, Emma Watson, Daniel Radcliffe and Rupert Grint pose together at the premiere of “Harry Potter and the Deathly Hallows: Part 2” at Avery Fisher Hall in New York. Warner Bros. said on Oct. 3, 2016, that all 8 Harry Potter films will be re-released in theaters for a one-week run beginning Oct. 13, 2016. AP

LONDON  — Daniel Radcliffe is returning to the London stage in a 50th-anniversary production of Tom Stoppard’s verbally dazzling “Rosencrantz and Guildenstern Are Dead.”

The Old Vic Theatre says the former “Harry Potter” star will play Rosencrantz in the comedy about two minor characters from Shakespeare’s “Hamlet.” Joshua McGuire will play Guildenstern in the production, which opens in March.

Radcliffe, who is 27, was last onstage in London in a 2013 production of “The Cripple of Inishmaan” that later ran in New York. He has also appeared on Broadway in “Equus” and “How to Succeed in Business Without Really Trying.”

The Old Vic also announced Thursday that it will stage the world premiere of “Girl From the North Country,” a play by Irish playwright Conor McPherson featuring classic songs by Bob Dylan.