In arraignment, Mark Anthony pleads not guilty to marijuana possession 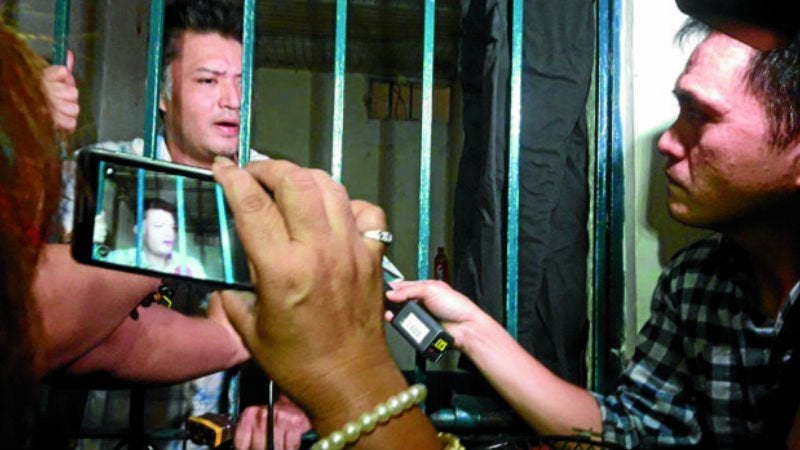 BEHIND BARS Actor Mark Anthony Fernandez says the kilo of marijuana found in his possession by policemen was to be used as medicine to prevent cancer. CONTRIBUTED PHOTO

ANGELES CITY—With his mother, actress Alma Moreno, by his side, actor Mark Anthony Fernandez pleaded not guilty to the charge of transporting and possessing a kilogram of marijuana when arraigned on Thursday at a regional trial court here.

Moreno had been with her 37-year-old son since Wednesday night.

But Judge Eda Era of the Regional Trial Court Branch 60 here dismissed a second charge of possession of drug paraphernalia filed against Fernandez.

The police had accused Fernandez of carrying a grinder, supposedly  an equipment for drug processing, when he was arrested on Oct. 3, after he drove past a checkpoint here.

The grinder was not among the items recovered from Fernandez’s car in the police inventory that included an open package of dried marijuana.

Fernandez has not yet been arraigned on a third charge of resisting arrest at the Municipal Trial Court Branch 1 under Judge Ireneo Pangilinan.

A conviction for transporting and possessing marijuana carries a penalty of life imprisonment and a fine of up to P10 million.

Under the law, suspects caught with more than 500 grams of marijuana are not allowed to post bail for their temporary freedom.

Fernandez, as of Thursday, was detained in the Angeles police’s Station 6. The queue of people wanting to see him indicated he had yet to be moved to a congested prison of the Bureau of Jail Management and Penology inside Camp Tomas Pepito, the headquarters of the Angeles police.

The lines have slowed down traffic flow in the city’s university area. —With Tonette Orejas