Good singing not enough to stay in the game, T.O.P. boy band says 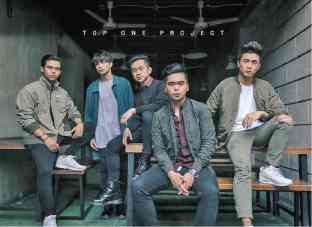 For the young men of the local boy band Top One Project (T.O.P.), being in a musical group isn’t merely a show biz stepping stone, but a viable career path that they could see pursuing in the long term.

The prospect of going solo has yet to cross their minds. “We’re not looking too far ahead. Right now we’re focused and committed to T.O.P.,” member Miko Manguba, 22, told the Inquirer at a recent press conference for the group’s coming concert on Oct. 28 at Music Museum (call 891-9999).

Miko—together with Adrian Pascual, 18; Joshua Jacobe, 22; Louie Pedroso, 20; and Mico Cruz, 21—won the GMA 7 reality-based talent search “To the Top” last year, which earned them management and recording contracts with the network. They released their  debut album in April.

Louie, who was a member of La Salle Greenhills’s Kundirana ensemble, said the current goal is to maximize T.O.P.’s potential. “Being part of a group is also very fun. The dynamic is different,” he pointed out. “It’s like performing with your barkada.”

While they also dance and preen, as most boy bands do to get young girls going, the five members pride themselves on being serious vocalists and for making music their top priority. “We do the cutesy things as well, but we also hope to be respected in the industry,” Louie said. “During the contest we were mentored and judged by Ryan Cayabyab and The Company, so it’s really our singing we want to highlight,” Miko added.

The quintet cited Backstreet Boys, *NSYNC, Boyz II Men and One Direction as some of the boy bands they listen to. They’re also fans of the popular a cappella group Pentatonix, that they admire for its “unique and varied attack to its singing.”

T.O.P. has only been together for a little over a year. But based on the impromptu performance their members did at the media event, it seemed that they already have their harmonizing down pat—clean and suave. “We all train and jam together and I think that helps a lot with our harmonizing,” Adrian said. “We know how to adjust to each other.”

Mico, on the other hand, believes that it all boils down to having solid basics. “Before we could even attempt doing all those vocal embellishments, we make sure that we’re in tune and on pitch… We also sing as one, so our voices blend naturally,” said the neophyte, who was also a Kundirana member.

But more than good singing, they all agreed that maintaining harmony among themselves is imperative to stay in the game. “We know that many boy groups break up because of internal conflicts,” Louie pointed out. “That’s why we try to get to know each other well.”