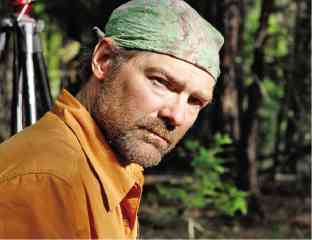 Our quixotic and continuing quest for unusual TV shows took us all the way up to the hinterlands and winterlands last month, as we discovered the daring and pioneering delights of the “Survivorman” reality TV shows.

In them, outdoorsman and survival expert Les Stroud serially goes where very few “logical” people fear to tread—to the most remote, inhospitable and hostile locations on the planet—with no equipment and supplies to keep him safe and alive!

He does have his one-man camera system, with which he records his often amazing and appalling experiences and challenges for viewers who are watching the show safely at home to learn valuable life lessons and insights from.

They may never find themselves in such desperate and primal danger, but he exemplifies the indomitability and resourcefulness of the human spirit—which they can be inspired by and tap into for their own purposes, in their less spectacular life crises.

We first watched a “Survivorman” episode on Discovery—it was on a new island in Tonga created by an underwater volcanic upheaval—you don’t get much more primal than that!

While watching Stroud do his risky pioneering and “discovering” with full empathy, we marveled at his skills—and passion for what he’s opted to focus on in his eye-opening and consciousness-raising shows.

Even more strikingly, he obviously has such a good time putting himself at risk, even “delighting in the unexpected dangers that occasionally present themselves, because he could learn something new from solving them.

Other episodes have taken Survivorman to the Canadian arctic, where his snowmobile broke down and he had to figure out how to find his way back to base without it; to the middle of the ocean off Belize, where he survived on a raft for seven days—then was washed ashore on an uninhabited island; and to the Kalahani Desert, where his 4×4 ran out of gas, and he had to survive the extreme heat.

More: He explored one of the deepest, densest parts of the Amazon rainforest. Visited the mountains of Norway, where he had to survive for 10 days and nights!

In some new adventures, Stroud even simulated fictive predicaments to add to the “degree of difficulty.”

In the mountains of Transylvania, for instance, he simulated a broken leg and a Romanian search-and-rescue team had to locate him.

And, in Chilean Patagonia, he retraced the last steps of an experienced Argentinian hiker to investigate how tragedies can occur even on well-traveled wilderness trails.

Stroud’s shows have been cited for saving many lives with their cautionary warnings and tips. No wonder they’re watched and admired by many grateful viewers!