‘Game of Thrones’ returns to Spain for season 7 filming 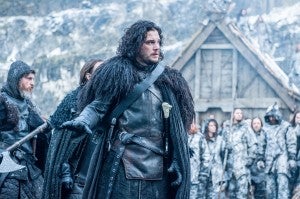 PHOTO from HBO and Helen Sloan

HBO’s critically acclaimed series “Game of Thrones” is currently under production and initial filming stage for the much-awaited seventh season, set to be released next year.

Most of the show’s cast and crew have already been spotted in Belfast, Ireland, where majority of the scenes featuring the snowy terrain of “Winterfell” and “Castle Black” were shot in previous seasons.

Once they wrap up filming in Northern Ireland by late November, the GOT cast will reportedly be returning to Seville, Spain, according to GOT fansite Winter Is Coming.

Local crew for filming has already been hired, with notices sent out in locations like Bermeo, Zumaia, Trujillo and Malpartida—all found in the Western Caceres province and which are all confirmed film locations.

Around 500 crew members are already on board to work until December, majority of whom will be deployed on the islet of San Juan de Gaztelugatxe, the report said.

GOT returns to Spain where the majority of season 5 was shot, after show frontrunners David Benioff and D. B. Weiss admitted that choosing the location “seemed like bit of an experiment” at first.

The production was trying out new landscapes for the southern and eastern parts of the show’s world, particularly Dorne, which was heavily inspired by real-life medieval Spain in the novels.

Filming was mostly concentrated around Seville to represent Dorne and its capital Sunspear, while the city of Cordoba was used to represent the Long Bridge of Volantis.

The choice of landscape has also fueled speculation that the Dornish City arc featuring Oberyn Martell’s paramour, Ellaria Sand, would play a much bigger role in the upcoming season.

As reported by multiple fans on Twitter, the crew are still settled in the small village of Moneyglass in Ireland, which is home to the the great lords of Winterfell, House Stark.  Khristian Ibarrola 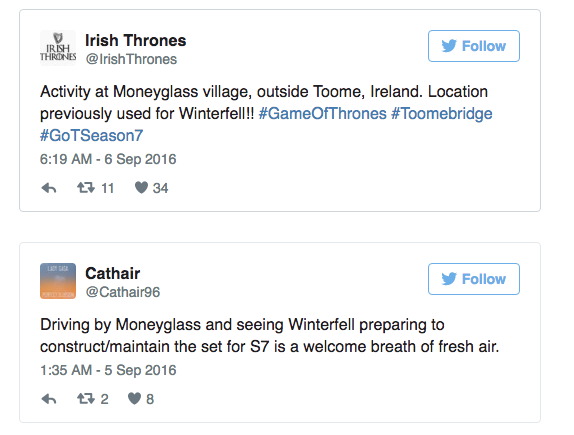