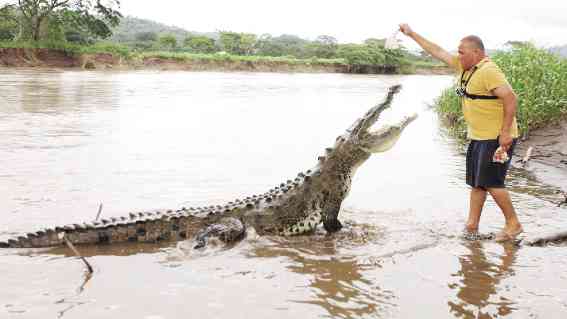 One of the most aptly and pertinently titled programs on the tube these days is “Preposterous Pets” on Animal Planet.

It fully lives up to its “ear-catching” title by featuring unusual animal and human partnerships, making viewers with just the usual doggie and kitty pets feel like such unimaginative and boring sticks-in-the-mud.

It means we love our Ton-Tons, Ash-Ashes and Mr. Whiskers, but wouldn’t petting an elephant, camel or crocodile be more exciting and original?

Well, for boring viewers and pet owners like us, at least we now have shows like “Preposterous Pets” to watch—as a safe outlet for our “dangerous” animal fantasies!

A recent telecast of the venturesome production proved to be a bracingly varied viewing treat, leading off with a feature on a woman who loved her five pet monkeys even more than her own human family (or so her harassed hubby “complained”).

The five monkey “babies” had the run of the house and  swimming pool—and, as far as their doting mom was concerned, they could do absolutely no wrong.

Even more of a spoiler was the woman who loved to take care of camels. She enjoyed all of the attention that her own unusual, twin-humped “kids” got from astounded gawkers—

especially on social media, where her videos of them have gone viral, with millions of hits registered each month.

Ditto for the “alligator wrangler” who dotes on his own “ugly but (to him) lovable” pets.

Aside from having “fun” with them, he’s also on a mission to protect them from hunters who prize them for their skin and, now, trendily delectable meat. The “advocacy” angle soon becomes one of its most significant motifs.

Its next feature is on a woman in Thailand who is celebrated for her unique ability to communicate with and heal elephants.

It turns out that there are many elephants in that country that have been physically and psychologically abused by their owners, so the “elephant whisperer” featured in the show is prized for her rare ability to talk to them—and instinctively know how best to treat them.

Another animal advocate, this time based in Germany, seeks to understand the behavior and needs of wild wolves

—by not just breeding them, but also by “becoming” one of them!

He lives and plays with them, and even knows how to communicate with them by means of a great variety of howls, grunts and other feral sounds.

All of these “colorful” features and the special animals and humans they highlight make viewers think in more enlightened ways about man’s relationship with all of the wild and  domesticated animals around them.

Some animal or pet owners may initially be impelled by the need to just be venturesome and “different.” But, it’s instructive to note that quite a number of them eventually take an additional step forward, and feel the need to become animal advocates, protectors, nurturers, whisperers, etc.

The pets it features may be “preposterous,” but “Preposterous Pets” is an enlightening viewing treat!

Read Next
‘Lola Divas’ docu screening in US
EDITORS' PICK
Notice of 2020 regular meeting of stockholders June 18, 2020
SM prepares for ‘safe malling’
Leveling up your ‘lutong bahay’ with the kitchen companion you never knew you needed
NBI, Immigration to join hunt for ‘underground’ medical clinics
2 Chinese nationals arrested in raid on another unlicensed COVID-19 hospital in Pampanga
P2.2 trillion in losses: Cost of COVID-19 impact on PH economy
MOST READ
NCR is ready for GCQ — Palace
Revillame tells Roque: ABS-CBN is in my heart despite being in rival network
LOOK: Robredo, Vico Sotto, check Community Mart ops in Pasig
Año: Quarantine passes not needed in GCQ, movement restricted to essential travel
Don't miss out on the latest news and information.