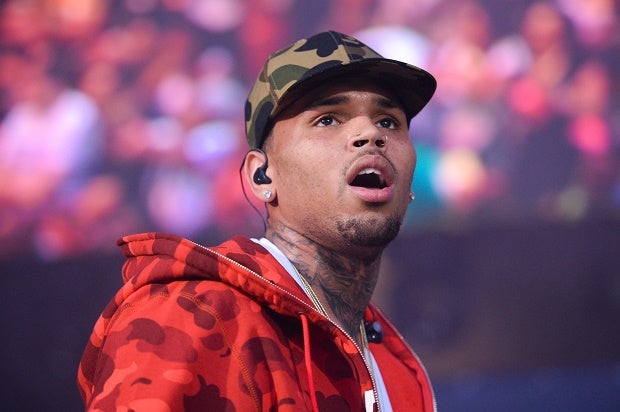 In this June 7, 2015 file photo, rapper Chris Brown performs at the 2015 Hot 97 Summer Jam at MetLife Stadium in East Rutherford, N.J. Authorities in Las Vegas say there’s insufficient evidence to charge R&B singer Brown with a crime in an altercation with a woman in a casino resort hotel room. Clark County District Attorney Steve Wolfson said Monday, Jan. 25, 2016, that he met last Wednesday with detectives who investigated the Jan. 2 complaint and they decided not to seek a misdemeanor battery and theft charges. Invision/AP File Photo

LOS ANGELES, United States – An attorney for Chris Brown said Friday that a woman who has accused the R&B singer of pointing a gun at her was clearly bent on setting him up and that police found no weapons at the singer’s home.

Lawyer Mark Geragos told reporters that 25-year-old Baylee Curran became “irate” and called police early Tuesday after she was asked to leave the singer’s Los Angeles home “because she was acting in an erratic manner.”

“I know that some people find it hard to believe that people in this day and age may lie for certain ulterior motives,” Geragos said. “But it is interesting to me that when somebody has an incident that supposedly you are frightened to death and you’re scared, that the first place you go is to the (gossip website) TMZ, as opposed to the hospital, your psychiatrist or maybe even your lawyer.”

Curran claimed that the “Kiss Kiss” singer became angry and pointed a gun at her after she admired a diamond necklace worn by another man attending a party at the singer’s house.

Brown was arrested on suspicion of assault with a deadly weapon following a day-long standoff with police at his palatial estate. He was released late Tuesday night after posting $250,000 bail.

Geragos insisted that no guns or drugs were found in the singer’s home after a search by police, nor was any jewelry matching the description of the bauble Curran claimed she was admiring when ordered out of the house.

“She described with great detail what this piece of jewelry was,” he said. “Nothing was found that corroborated her statement.”

READ: Chris Brown, a singer better known for his violence

He added that none of the other six people present at the house had corroborated Curran’s account.

“The story that was conveyed to me by the witnesses there is that nothing happened,” he said.

Geragos said he was working to authenticate a text message Curran allegedly sent an acquaintance after the incident at Brown’s house in which she indicated she wanted to teach the singer “a lesson.”

“If that text is true, then it gives great credence to what my client said initially – that nothing happened and this was a set up,” he said.

Brown, who is scheduled to appear in court on September 20, has had a number of run-ins with the law.

Most notoriously, he was convicted of beating then-girlfriend Rihanna before the 2009 Grammy Awards, forcing the pop singer to miss the music industry’s annual gala.

Chris Brown opens up on Rihanna assault in new documentary