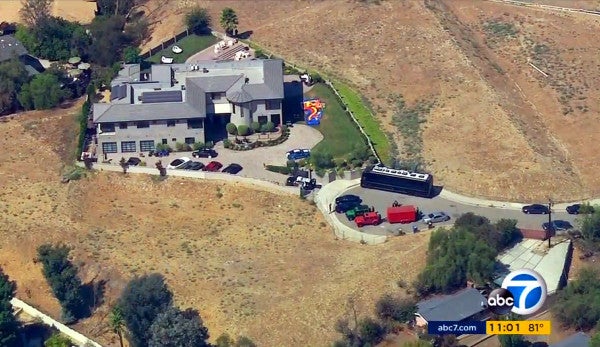 This image from aerial video provided by KABC-TV shows the home of entertainer Chris Brown with a police vehicle outside, in the Tarzana area of Los Angeles Tuesday, Aug. 30, 32016. KABC-TV via AP

The Los Angeles police have released singer Chris Brown from custody after arresting him on suspicion of assault with a deadly weapon, jail records show.

He was arrested on Tuesday following an hours-long standoff after a woman alleged he pointed a gun at her.

Prosecutors have not formally charged him.

“Chris is out and well,” Brown’s lawyer Mark Geragos tweeted on Wednesday. “The allegations against him are demonstrably false.”

The Los Angeles Police Department earlier said that officers headed to Brown’s palatial home after the woman called for help.

During the surreal standoff, Brown, 27, took to social media to deny any wrongdoing in a series of videos posted on Instagram.

Police by early afternoon had obtained a search warrant and entered the singer’s home.