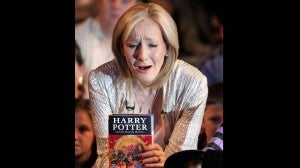 After proclaiming that she’s done with the adventures of Harry Potter, famed British novelist J.K. Rowling apparently has had a change of heart.

The 51-year-old author has written three new collections of short stories that will take readers deeper into the “dark side” of the Harry Potter wizarding world, publishers confirmed to TIME on Wednesday (Thursday in Manila).

Starting Sept. 6, die-hard “Potterheads” will once again be treated to digital books (e-books ), each approximately 10,000 words long. They will be released on the franchise’s offial interactive website, Pottermore.

“J.K. Rowling’s writing in these collections reveals intricate details of her characters’ lives, their histories, as well as her inspiration,” Pottermore chief executive Susan Juverics said in a statement.

The three stories are now available for pre-order at $3 (P139) each.  Khristian Ibarrola