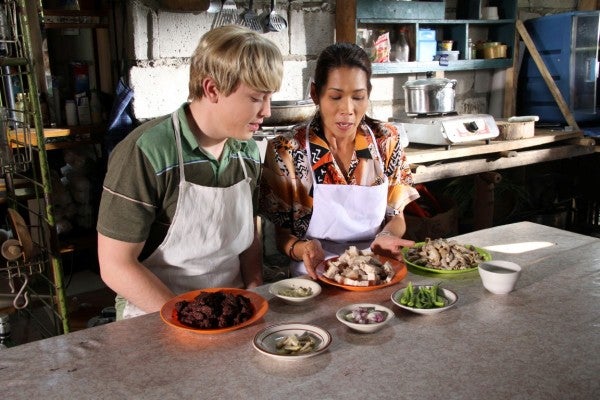 A scene from “Mercury is Mine” by Jason Paul Laxamana

Entries in  the Shorts B group- “Butas” by Richard Cawed, “Ang Hapon ni Nanding” by Rommel Tolentino, “Get Certified” by Isaias Zantua, “Fish Out of Water” by Mon Al Garilao and “Forever Natin” by Cyrus Valdez-will have their gala premiere at 3:30 pm at the CCP Main Theater.

This group of shorts covers subject matter ranging from the life of a female miner in the Benguet mountains, a middle-aged man’s lazy afternoons at a farm,  a Korean-Filipino teenager’s struggles to fit in,  life after death and becoming a demon,  and two women in a same-sex relationship.

“Mercury is Mine” by Jason Paul Laxamana, an entry in the full length feature category, makes its gala premiere at 6:15 at the CCP Main Theater.  In the film, a cook, played by popular comedienne Pokwang, is about to close down her failing eatery when a young white American man, played by Bret Jackson , approaches her and begs for work in exchange for shelter.

“Lando at Bugoy” by Vic Acedillo, Jr., an entry in the full length feature category, holds its gala premiere at 9 pm at the CCP Main Theater.  Set in Camiguin Island, Mindanao, the film centers on Lando, a lapida maker, and his 15 year old son Bugoy. Disrespected by Bugoy, Lando, a high school dropout, tries to solve this problem by returning to school which only makes his son hate him even more. Amidst the struggle between them, an unexpected event changes everything.

“Ang Bagong Pamilya ni Ponching” by Inna Miren Salazar Acuna and Dos Ocampo and Hiblang Abo by Ralston Jover will be screened at the CCP Little Theater at 10 am and 12:45 pm respectively.  These two films are competing in the full length feature category.  Five shorts in competition in the Shorts A grouping (“Bugtaw”, “Ang Maangas”, “Ang Marikit at Ang Makata”, “Mansyong Papel”, “Nakauwi Na” and “Pektus”) will be screened at 6:15 pm at the Tanghalang Huseng Batute.

In the Indie Nation section, two films by Gabby Fernandez-“A Day With Grace and Mana (Inheritance)”-at 6:15pm and Luisito Ignacio’s “Laut” at 9 pm will be screened at the CCP Tanghalang Huseng Batute.

A 16-minute short film, “A Day With Grace”, is a day for redemptions and transformations and more importantly, it is about a woman’s courage to do whatever it takes to be able to move on.

In Mana, a family is confronted with issues of inheritance, tradition and the family legacy as their matriarch lies at her deathbed.

Laut depicts the plight of young bride and the life of a village uprooted from the seas of Zamboanga to the lahar deserts of Pampanga.

“Echorsis” by Lemuel Lorca will be featured in the Rainbow section of Cinemalaya at 9 pm at the CCP Tanghalang Huseng Batute. More than a spoof of The Exorcist, Echorsis (echos!) is a comedic examination of our gender biases, a hilarious parody of our religious bigotry, and a cautionary tale of possession–of the demons we call Demon, and the daimon we call love.

Entries to the Ika-28 Gawad CCP Para Sa Alternatibong Pelikula at Video will be screened free of charge from 10 am-9 pm at the Tanghalang Manuel Conde.