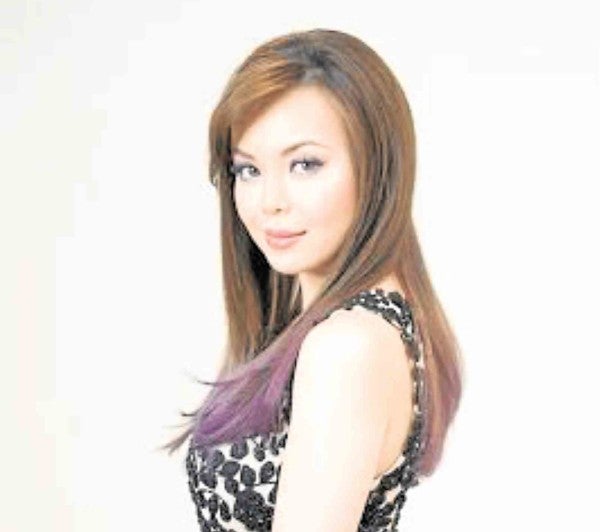 LOS ANGELES—“To reach even just half of what my grandma Sylvia La Torre has achieved will make me extremely happy and humbly fulfilled,” singer-actress Anna Maria Perez de Tagle said recently about her long-term goal. But she is doing fine on her own.

The Filipino-American performer began performing with Sylvia, whom she fondly calls “Mamacita,” when she was a little girl. (Anna Maria is the daughter of Sylvia’s son, former actor Artie Perez de Tagle.)

In a concert, the legendary show biz veteran called on Anna Maria to sing “Bahay Kubo.”

About two decades later, Anna Maria and Sylvia will share the stage and perform with a 60-member orchestra on Aug. 13, 6 p.m. at the John Wayne Performing Arts Center in Glendale, California.

As the special guests of the Filipino American Symphony Orchestra (Faso), which is led by Robert “Bob” Shroder, grandma and granddaughter will perform solo numbers and a special duet.

Other guests are Broadway actress Joan Almedilla (who will narrate Sergei Prokofiev’s “Peter and the Wolf”), 13-year-old drum prodigy Vinnie Aguas, singer Mikaela Bautista and the Faso Children’s Ensemble. (More information on the show at www.fasofoundation.org.)

Excerpts from out chat with Anna Maria:

What are your earliest memories of your grandmother?

My earliest and fondest memory of my Mamacita was watching her perform in one of her shows and calling me to go up on stage to sing “Bahay Kubo.” I was only 5 years old. I remember being so shy since it was my first time on a big stage, in front of a large audience.

When I was 7, my Mamacita became my first vocal coach. She taught me different exercises and techniques to strengthen and build my voice. Singing is my first love, all thanks to my Mamacita. She has been an icon and inspiration to me.

What are you looking forward to about performing with Faso and with Sylvia?

I had the privilege of watching “Faso Goes Broadway” last year with my grandma Sylvia. I was so impressed with the entire production that I really looked forward to performing with the orchestra someday.

So, when we were invited to perform in this coming concert, I was so excited. I’ve performed with an orchestra before, but never as big as a 60-piece orchestra.

I’m looking forward to performing under the baton of maestro Bob Shroder and the incredible arrangements of each song by Louie Ramos and Naldy Rodriguez. To perform alongside my Mamacita will be the icing on the cake.

What are your memories of working with the following:

Miley Cyrus: Miley is a big ball of energy. “Hannah Montana” wouldn’t have been as big as it was without Miley.

Demi Lovato: Demi is multitalented. It is a pleasure to be her friend and to work with her in the “Camp Rock” Disney movies.

Jonas Brothers: I love them and the whole family! The Jonas brothers are like my real brothers. Nick is just like me, very reserved but once onstage, a completely different person.

You can always count on Joe to make you laugh no matter what. He’s the goofball. It’s very easy to get along with him.

Kevin is always looking out for everyone. I’d like to say he is truly the “kuya” (brother) of the group.

What were the highlights of your Broadway debut experience in “Godspell”?

I couldn’t have asked for a better Broadway debut! “Godspell” was one of the most rewarding experiences of my life. There’s nothing like the thrill of performing live on a Broadway stage. You always have to be aware that you can’t afford to make mistakes. There are no “second takes.”

One highlight I’d like to point out, that I’m very proud of, is holding the record of not missing a single show during my stint in “Godspell.” Being on Broadway was challenging, but I fell in love with it. I’d do it all over again.

You got to sing before the late Nancy Reagan and hundreds of dignitaries at Ronald Reagan’s centennial birthday celebration. What was that like?

Singing for the 100th birthday anniversary of Ronald Reagan was an amazing experience! Mrs. Nancy Reagan herself requested me to sing “I Dreamed a Dream” from “Les Miserables” and “Someone Like You” from “Jekyll and Hyde,” because they were the late Mr. Reagan’s favorite songs. It was one of my memorable performances since I got to sign on Mr. Reagan’s commemorative plaque, which is displayed in the Ronald Reagan Library. It was also a big surprise for the “Hannah Montana” fans to know that I can really sing because, in the show, I portrayed an awful singer.

What kind of fulfillment do you get from making the videos and tutorials in your own YouTube channel, “Anna’s Beauty Secrets”?

I love doing makeup and hair—it has been my other passion, all thanks to my mom (Evelyn). She always did my makeup when I was growing up, when I was doing musical theater and during my Disney days. Because a lot of my characters were “fashionistas and trendsetters,” I always got tweets and requests to show how I got ready for scenes and what products I use.

YouTube has blown up over the last few years, especially for “beauty gurus.” Since doing makeup and hair is my hobby, I decided to come up with my own beauty channel, “Anna’s Beauty Secrets.” It is sponsored by Stylehaul (youtube.com/annasbeautysecrets).

What are your long-term goals and dreams?

It is every artist’s dream to be recognized in your chosen field. I consider being a Filipino in Hollywood as an achievement itself. But performing  live on Broadway brings a different feeling of fulfillment! I have such high regard and respect for artists onstage who are doing eight shows a week. It’s a true test of a real performer.

My ultimate goal is to continue performing and sharing my talent with the world. My Mamacita would like me to continue her legacy by singing her kundiman and balitaw songs. I am greatly honored to do so. To reach even just half of what my grandma Sylvia La Torre has achieved will make me extremely happy and humbly fulfilled.