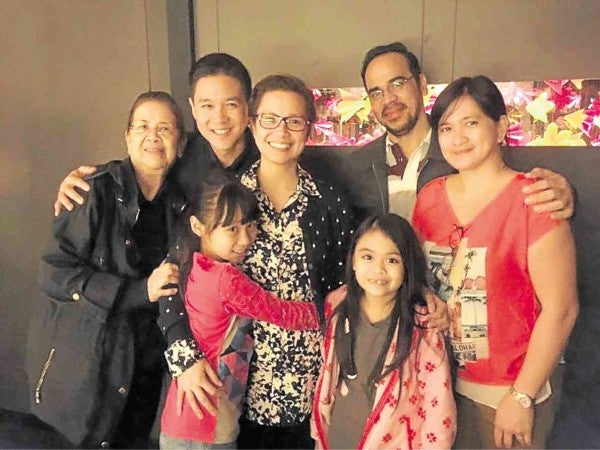 FROM left: Ligaya, Rob, Nicole, the author, Esang, her father Porong and her mother Joyce

My family traveled to Singapore last weekend. Normally, whenever we head over there, it’s one massive food trip. Well, it still was, but we had another, more important, reason for the visit.

This would be the final weekend of “Les Misérables” in Singapore, so we flew to watch Esang de Torres play Little Cosette. For the two-month run in the Lion City, she shared the role with Fil-Aussie actress Chloe delos Santos.

“Les Miz” ran at The Esplanade, one of Singapore’s finest performing venues.

My brother Gerard and I have made quite a few trips for concerts, but I’ve never actually seen a show there, so this would be a treat. My husband Rob was excited because he never got to see this new production of the show; my mother Ligaya was thrilled because she’s a huge fan of Esang; and my daughter Nicole was exhilarated because she and Esang are good friends.

As for me, given our shared history in “The Voice Kids,” seeing her on this huge stage in this musical that has changed my own life was something I couldn’t wait to witness.

The moment the spotlight lit her tiny figure, we all started crying. Nicole had both her hands over her mouth. My mom and I had tears welling up in our eyes. And the moment she started to sing “Castle on a Cloud,” our hearts swelled with pride … pride that this 9-year-old girl, all by herself on a dimly lit stage, without any trace of fear, cast her eyes up and sang with perfect pitch and a bloody good British accent. She was the only Filipino actor onstage that evening. And she represented our country and our theater artists well.

We headed backstage to take some photos with members of the company, and then jetted out to meet Esang, her father Porong, mother Joyce and aunt Irma for Japanese food to celebrate a triumphant run.

I cannot wait to see what the future holds for this gifted and talented youngster. The world is her oyster now, and it all looks very bright.

Ain’t afraid of no ‘Ghosts’

The posts on Facebook being furiously shared by friends ultimately pushed me to go see the newly rebooted “Ghostbusters.” I hadn’t read any critics’ reviews, so I had no preconceived notions of what I would see, except for what I had read on social media: that this was a movie where the lead characters—four women, by the way—kick ass and take names without looking like they’re posing for the cover of the swimsuit issue of Sports Illustrated.

Both Rob and I had seen “Ghostbusters” as youngsters in the 1980s (he even bought a Lego Ecto-1 because of the nostalgia), and we still have great memories of the film. But I do appreciate the remake, and more importantly, I love how it was made.

These women are smart, brave and sassy. None of them whine about why they haven’t yet found the right guy. None of them have their breasts sticking out, or their derrières squeezed into tight outfits. It’s all about saving the city they love from ghosts. And they all kick serious butt!

My favorite moment of the film is when Jillian whips out her sidearms. She then licks the barrel of one of them, and then, dressed in a dirty, loose-fitting MTA jumpsuit, a mop of unruly dirty blonde hair and an almost zen-like expression on her face, starts this amazing action movie sequence, laying waste to every ghost that tries to subdue her. Without trying to be sexy, she was, by felling every apparition and supernatural being going at her.

I made sure that we brought Nicole to see the movie along with us. She held my hand tight for the opening ghost sequences (I wouldn’t advise very young kids to see this), but kept them wide open for all the action. And yes, her favorite Ghostbuster is Holtzmann because, “she’s weird.”

But the bigger picture, which she totally got, is that this summer blockbuster is led by four women whose characters conquer, not with their looks or sex appeal, but with their smarts, passion and courage.

Lego just released a 2016 Ecto-1. You bet I’ll be adding that to my collection to display side by side with Rob’s.

These four women were not afraid of ghosts. Nor were they afraid of leading this latest hit.