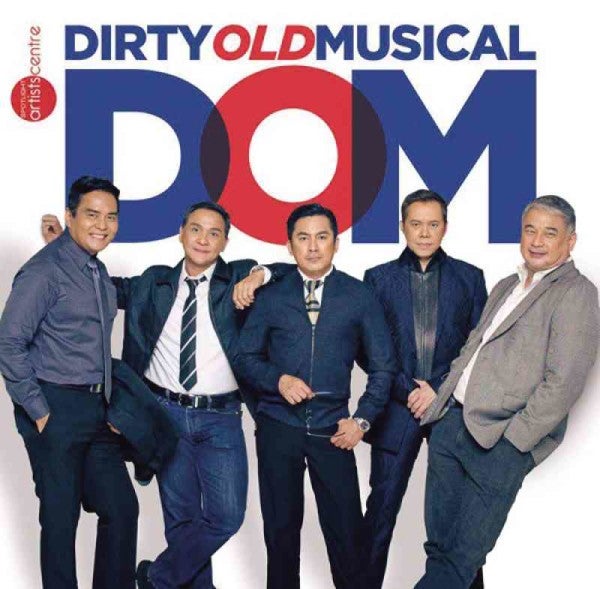 WE’RE HAPPY to hear that another new original Filipino musical, “DOM (Dirty Old Musical),” is about to hit the stage at Music Museum (Sept. 1-10).

Produced by Robert Seña, Isay Alvarez and Tricia Amper-Jimenez’s Spotlight Artists Centre, the new show topbills relative “oldies but still goodies” Nonie Buencamino, Ricky Davao, Michael Williams, John Arcilla and Robert as mature men who are in the throes of masculine “midlife crises”—with all the “loopy and droopy” consequences that come with it!

With its stellar cast of gifted and irascible actor-singers, we can expect “DOM” to be the feistiest, funniest show in town this September, so be sure you’re present and accounted for at Music Museum for the rollicking ride!

The new musical is penned by Rody Vera, directed by Dexter Santos and features songs that were OPM hits in the ’80s (musical direction by Myke Salomon). Call 0919 911-4444 for sponsorships and show-buying inquiries.

We’re particularly interested in seeing Nonie performing in a musical again. For years now, he’s been much busier as a TV actor, going from one series to the next, seemingly without pausing for breath—and “jingle lang ang pahinga.”

It’s been great for his bank account, but Nonie should do more musicals because he’s one of our few real “total performers.”

Our appreciation of Nonie’s singular gift as an all-around player was triggered decades ago, when we watched him in “Kenkoy Loves Rosing,” also at the Music Museum (how’s that for coming full circle?).

That was the start of something grand for us, because we were bowled over by Nonie’s portrayal of a “trying-hard” Elvis Presley impersonator. It must have been really hard for him to be so ridiculously lousy as a Pinoy Elvis clone, but Nonie was able to pull it off so well that we became a fan “for life.”

Of late, however, we’ve occasionally been disappointed by Nonie’s TV portrayals, which have gotten bogged down by endemic teleserye weariness, obviousness and predictability.

It isn’t that the actor’s talent has been eroded, it’s more like his choice of roles to play has occasionally been—less than judicious.

Well, if that’s how the teleserye cookie crumbles and bumbles, we’ll just have to reenergize our admiration for Nonie elsewhere—like in this new “DOM” show, where he’ll probably be more in his thespic element.

What about Ricky Davao? We’ve similarly enjoyed his performances for decades, but our tongue-in-cheek take on him for this piece is focused on his singing: For years now, we’ve been kidding Ricky about his love for singing—which hasn’t really loved him back.

—And for his readiness to sing anytime, anywhere at the drop of a hat! —Even worse, he “shamelessly” overstays his welcome. Like, at a house-blessing party one time, Ricky was asked to sing one song—and ended up singing six!

But, the point to all this is that all that “practice” has indeed paid off—because, as Ricky “boasted” to us recently, he now gets paid for singing! —Like, he’s getting a talent fee for performing in “DOM,” right?

OK, Ricky, you win. So, we’re fully, eagerly prepared to enjoy your show!