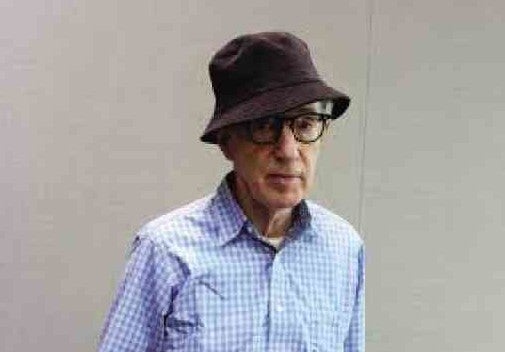 LOS ANGELES—“This is like walking into the future,” Woody Allen said after stepping off from Conrad New York Hotel’s cavernous lobby featuring a 10-story artwork by Sol LeWitt. Settling into a chair in a meeting room, Woody took off his favorite rain hat and put it down on the table.

“Let me turn my hearing aid up,” the auteur said as he adjusted a small remote. He was dressed in his “uniform”: neatly pressed checkered blue cotton shirt, white tee, chino pants and sneakers. And of course, his trademark black-framed glasses.

For starters, we asked him how he came to cast Justin Timberlake in his untitled project, described as a drama set in the ’50s and set for a 2017 release.

“The first person I cast was Kate Winslet, then I cast a young girl named Juno Temple who I thought very much of,” the film genius began. “I cast Jim Belushi who I thought was absolutely perfect for it.

“I had seen Justin Timberlake in the Facebook movie (‘The Social Network’) in just a few perfunctory moments while I was on the treadmill. I would be tuning in and be saying, ‘Who is that guy? He seems to be very good.’ So I remember him from the Facebook movie and I don’t know him from the music world. He always seemed like a very interesting actor.

“I was doing this film and I thought, who could I get that would be an interesting guy to play a lifeguard in about 1950?  I was sitting and talking with my brain trust. Someone said, ‘What about Justin Timberlake?’ They said, ‘Yes, he would be wonderful; he is a wonderful actor.’

“So, he came in from California. We chatted, and it was two minutes, because there’s really nothing to say.”

His final sentence on this topic was classic Woody Allen: “I want to use him, he would like to do it, and so we smiled and exchanged insincerities, and we signed him up.”

“Café Society,” the iconic director’s current film, which stars Kristen Stewart and Jesse Eisenberg, has the best limited opening box-office result of 2016 so far. Reaping better reception from the critics than his last two movies, “Café Society,” with its 1930s California and New York setting, is reportedly his highest budgeted project. At $30 million, that is an expensive film by Woody’s standards.

“I put my entire salary in ‘Café Society,’ the famous Manhattanite revealed. “It’s up on the screen because it cost extra from what I usually make and I would never try and get anymore from my backers. What money they give me, that’s all I spend. This one was more expensive because it was period, more elaborate and on two coasts. We had to set up different companies.”

“I know other directors who, when they started making films, would turn down a job because it wasn’t enough money. I would say to them, ‘You should make your film if they don’t give you any money at all. If they give you $500 to make the film, make it somehow.’

“Because money is the least important thing. I’ve always felt that way. I never had any interest in money whatsoever.

“But by the standards of my peers, I am not at all wealthy. It doesn’t matter. I am richer than I would be if I listened to my mother and became a pharmacist.

“I have enough money to make all the films I want. I live very decently because the low scale of show business is still much healthier than what a more deserving schoolteacher might make.”

Woody, whose real full name is Allen Stewart Konigsberg, maintained that even as a teenager growing up in Brooklyn, he already had that attitude toward moola. “When I was 16 years old, I started writing jokes after school. Immediately, I was hired, and I was paid for them. I was making more than both my parents put together.”

Woody’s Orthodox Jewish parents—Martin, who toiled in odd jobs, from waiter to jewelry engraver, and Nettie, a bookkeeper—didn’t mind that their son was clearly not going to be a pharmacist.

“They were supportive and they saw that I was succeeding quickly,” Woody recalled. “… salary to my family was the mark of substance. But they always did admonish me in my later years to save my money and to make sure that when I was old, that I would have money.”

At 80, the prolific filmmaker vows to continue churning out films.

“I could go on making movies as long as I hold out, and if I have healthy longevity—my father lived to a little over 100, and my mother lived to almost 100,” he declared.

“The other reason that people make them at a slower pace is not any creative problem for them—it’s that it’s hard to raise money for movies.”

“But I don’t have that problem. I raise money independently. So, the minute I pull my script out of the typewriter, the money is there.

“My movies are less expensive. When I see these summer films that are coming out, and they say this was $160 million and this was $200 million, I haven’t worked that way. I work infinitely cheaper than that.

“So being under the radar, I lose less and make less. That way, I have been able to go for many years getting backing and being a good risk.” 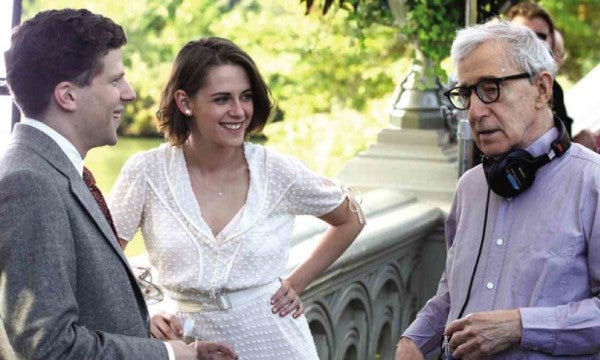 Donald Trump may have made a cameo in Woody’s 1998 film, “Celebrity,” but it’s no surprise, cinema’s brilliant wit is voting for Hillary Clinton.

“I am a lifelong, ‘genetic’ Democrat. I am supporting and donating to Hillary Clinton,” Woody stressed.

“I think Hillary is going to win decisively. She deserves to win, to be the president. She is the most qualified person to be president.”

What makes Woody so certain that Hillary will prevail? “Common sense,” replied the multiple Oscar and Golden Globe winner.

“Donald Trump, for all his bravura, theatricality and whatever he offers, is not really someone who would make a good president. I can just feel that people know that instinctively.”

On the rising racial tension and violence in the United States, Woody commented, “America is now paying the price for starting off its foundations as a slave-owning country, and as a county that was complicit in kidnapping people from Africa, bringing them here, making them slaves … and being filled with racial prejudice for generations.”

“It’s one thing to make laws that you have to integrate someplace, but if you don’t feel it and you still hate the other person, the laws don’t mean to much. And so we are a country that has been racially divided despite any ameliorating laws.”

The septuagenarian is poised to unveil his first-ever TV series in October. Still untitled, the Amazon Studios project is directed and written by Woody and stars him, Miley Cyrus and Elaine May.

“That was a different kind of experience for me,” he admitted. “I don’t know how good I am at television. It’s a limited series and it’s six episodes. I did it because they persuaded me to do it, and I thought I would give it a try, but it was hard for me.

“I was lucky. I had a good cast. Elaine May is one of the funniest women ever. Miley Cyrus is a wonderful young actress. I was surrounded by other people who were quite good and so hopefully, it’s amusing. I can’t guarantee. But I can’t guarantee my movies, either. I hope it doesn’t embarrass me too much.”

He capped off with yet one more Woody Allen one-liner: “You start off with great ambition, then you settle for no embarrassment.”