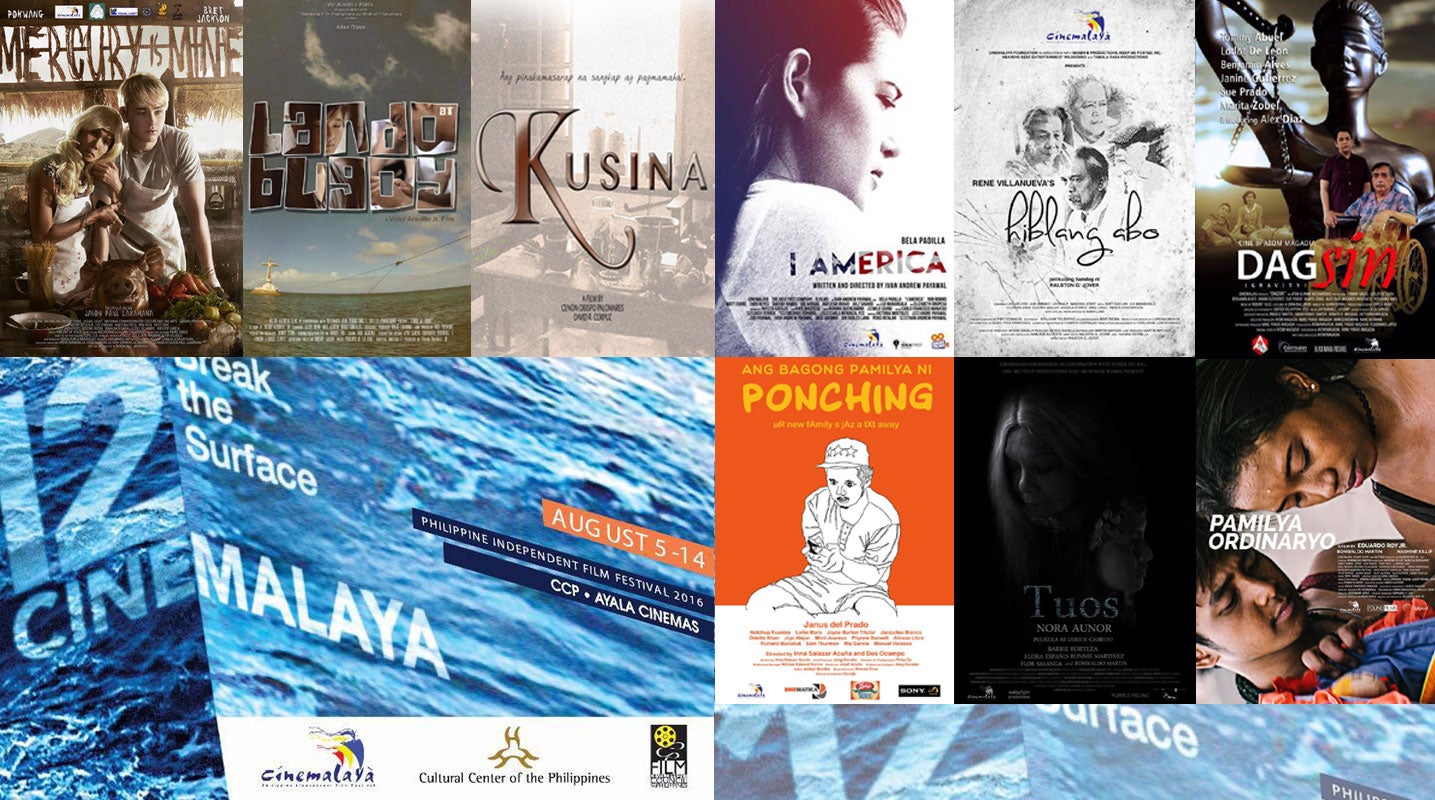 The 12th Cinemalaya Philippine Independent Film Festival will “break the surface” this year, offering strong lineups of films and nuanced stories that are primed to shake up the world of indie film buffs.

The festival will run from Aug. 5 to 14 in its main venue at the Cultural Center of the Philippines (CCP) and at its satellite locations in Greenbelt 3 and Glorietta in Makati, Trinoma and UP Town Center in Quezon City and Nuvali in Sta. Rosa, Laguna. Screenings at Ayala Center Cebu will start on Aug. 9.

Below are the trailers and synopses of the nine full-length features in competition:

Directors: Inna Salazar and Dos Ocampo
Writer: Inna Salazar
Cast: Janus del Prado, Ketchup Eusebio, Odette Khan
Genre: Dark comedy/family light drama
Synopsis: A religious man who does petty crimes, Ponching, gets into a new venture—text scamming, thinking it will not really hurt anyone. One day, his seemingly “innocent” text scam accidentally cons a recipient into thinking he is the bastard child of their late relative.

Director/Writer: Atom Magadia
Cast: Tommy Abuel, Lotlot De Leon, Benjamin Alves, Janine Gutierrez, Sue Prado, Marita Zobel, Rolando Inocencio, Yoshihiko Hara, Arpee Bautista. Introducing Alex Diaz
Genre: Drama-suspense
Synopsis: After surviving the Death March, Martial Law and the loss of his legs, Justino became an atheist. But when his wife dies, a part of him is yearning to believe in life beyond death, just for a chance to be with her again. Searching for parts of her he can still hold on to, he devours her diaries for information into their past—opening a Pandora’s Box of secrets.

Director: Ralston Jover / Writers: Ananias Estrella and Ralston Jover
Cast: Lou Veloso, Jun Urbano, Nanding Josef, and Leo Rialp; with Matt Daclan, Lui Manansala, Anna Luna, Angela Cortez, Mike Liwag, Flor Salanga, , Cherry Malvar, Rommel Luna, Rener Concepcion, Bernard Carritero
Genre: Drama
Synopsis: “Hiblang Abo” speaks volumes of muted memories and infinite struggles among four men in their twilight years, confined in a hospice facility or home for the aged. Their gray hair grows and fades unnoticed, their lives enter the void of oblivion. Everything unfolds so naturally into their swan song until their body pains and heartaches yield the same intensity, when their hearing and their feelings become permanently impaired; and when their blurry vision and memories become “clear” signs that the inevitable state of death is as fleeting as the vibrancy of life itself.

Director: David Corpuz
Writer-Director: Cenon Palomares
Cast: Judy Ann Santos, Luis Alandy, Joem Bascon, Gloria Sevilla, Therese Malvar, Bong Cabrera, Trina Legaspi, Czarina Yecla, Karen Gaerlan, Sarah Jane Biton, Elora Españo, Mike Liwag, Princess Ortiz, Criszha Mae Cruz, Yurianna Ashley Gracio, Kim Chloe Oquendo, Francis Grengia
Genre: Drama
Synopsis: “Kusina” (Her Kitchen) is the silent witness to the life and love of Juanita. It is her sanctuary, the place where she creates dishes for her family, her friends, even enemies and strangers. Through cooking, she gets to know the people around her, and in return, reveal herself to them.

Director: Derick Cabrido
Writer: Denise O’Hara
Cast: Nora Aunor, Barbie Forteza, Flor Salanga, Ronwaldo Martin, Elora Españo, Ronnie Martinez
Genre: Drama
Synopsis: Pina-ilog (Nora Aunor) is chosen to be “Binukot”, a maiden who is the fairest among the women in her village. She is chosen to keep the traditions alive, memorizing and performing chants and dances. She is expected to pass the title and responsibility to her granddaughter Dowokan (Barbie Forteza). When the sanctity of the “tuos” becomes threatened, putting Dowokan in danger, Pina-ilog realizes that she cannot just stand aside. Pina-ilog finds herself coming face to face, literally, with the ghosts of tradition, which have shackled her into a life of solitary confinement.

*Ticket Prices (For CCP screenings only)