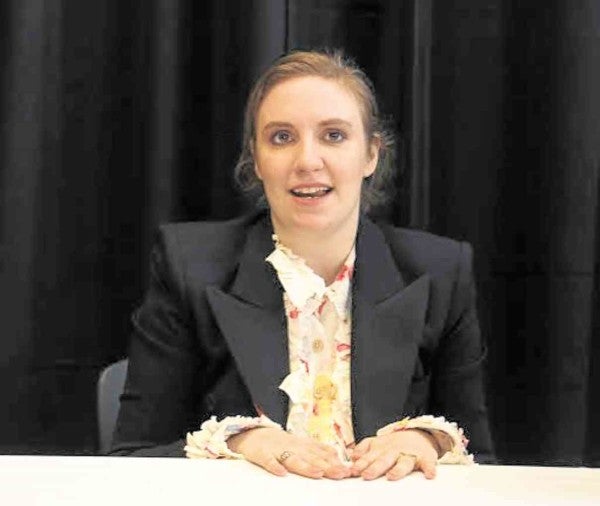 LOS ANGELES—In a building in Queens, New York, that used to be a bakery and is now where she has been shooting “Girls,” Lena Dunham gave a warm welcome. “This is our home base in our sixth season and final year, and we feel so lucky,” said the creator, writer and star of HBO’s acclaimed comedy series.

In a room inside Silvercup Studios, the largest TV and film production facility in New York, Lena talked about wrapping up the series that won her a 2013 Golden Globe best actress in a TV series-comedy or musical. She also revealed her post-“Girls” plans, which include making films.

Setting down her Bill Blass black-and-yellow purse, Lena, dressed in a black jacket and pants and a ruffled white blouse with color prints, talked about a wide range of topics.

The NY native, who turned 30 in May, and her “Girls” team decided it was the right time to end the series about a group of twentysomething girls.

Jennifer Lawrence’s essay about the gender pay inequality in Hollywood originally appeared in the twice-weekly newsletter.

The daughter of artists also talked about her four-year relationship with singer-songwriter Jack Antonoff.

Now that you are winding down with the show, how does it feel like?

It’s definitely emotional and we’re starting to feel the sadness of like those last days of high school. We also feel lucky that we can be so thoughtful and have the support of HBO in ending our show exactly when we want to.

Have you already written the ending?

We may still write and toss another ending. We haven’t shot it yet.

What episodes or scenes were the most fun to write?

I loved writing the episode last season where Marnie and Charlie (Dattolo, played by Christopher Abbott) meet again. It was a romantic kind of capsule movie episode because it was such a fantasy to be able to put those characters back together and explore it.

There’s also a scene that we shot that’s not out yet. It’s going to be in the final season that involves Allison, Ebon (Moss-Bachrach, who plays Desi Harperin) and me in a large group argument that was the most fun I’ve ever had writing or directing.

Was there a scene or dialogue that was considered too much?

Never. That’s part of the joy of working for HBO—letting them give you their creative trust. I’ve been allowed to do what felt right to me. We’ve been given this amazing freedom.

You haven’t been shy in your tweets and speaking your mind. What’s up with tweeting on your sex dreams about Kevin Spacey?

Oh, yeah, I just tweeted on my sex dreams about Kevin Spacey. I felt like I was having a bunch of them. I needed to examine it and see if other people were having them, too, and making sure it was healthy.

It doesn’t bother Jack when you have sex dreams about Kevin Spacey?

No, I don’t think he feels very threatened by Kevin Spacey right now. He’s feeling OK about it.

Speaking of sex, you, Jane Campion and other directors shoot sex scenes far more realistically than do many male filmmakers.

All of us are committed to the idea of showing sex as we have seen and experienced it. It doesn’t mean it’s devoid of pleasure, but it means that it has all of the complexity of engaging with someone in that way.

Viewers see many nuances in the sex scenes that you direct.

There are artful ways to shoot a sex scene, but it can be amazing to see two bodies in a really honest way of working through it.

You’ve achieved this huge success with “Girls.” Many people didn’t know who you were before this show.

Probably almost nobody knew who I was.

You turned 30 last May. What are your expectations of being in your 30s?

It’s nice that it corresponds with me having the opportunity to make new and different things and choices.

Do you still feel like a girl or the challenges of doing the show has turned you into a woman?

I was like, is this what a 30-year-old is supposed to feel like because, in some ways, I feel like I’ve had all this incredible experience.

The verdict is still out on just how mature I’ve become. We’re going to find out when the show is done in September.

Exactly how did the show change you?

I went from being somebody who had ambitions but no actual creative outlet to having this incredible tool for expressing myself.

It’s been my complete education. The show forced me to mature not just as a writer … It also helped me as an actor.

Do you feel like you have life all figured out?

No. Anyone who feels like they have their whole life figured out might be delusional—because there’s obviously a lot of variables.

Your Lenny Letter with Jennifer Konner is making quite an impact with its feminist essays, including Jennifer Lawrence’s, which provoked a lot of discussion about the gender wage gap in Hollywood. How did it start?

It started because we really wanted a chance to talk to the women in our audience about issues that matter to them, whether it was fashion, politics and entertainment. And to have a place for long-form journalism that touched on issues that mattered to the young women who might constitute our “Girls” audience.

Do you feel that in its run, the show somehow helped men and women understand each other?

If I could feel that I have given men and women a deeper understanding of each other, I would feel like I am allowed to retire—so, no. That being said, I do love when I hear from people say, “Oh, this show made me feel like I understood the experiences of my daughter, sister or girlfriend.”

One of the unexpected joys of this show has been how important the male characters have become.

You and Jack are successful in your respective careers. You’ve been together for four years now. How do you make it work?

It’s great when you’re an impassioned person with somebody else who also loves what he does, who cares and who has a mission. And it allows him to be supportive of what you do and also to give you good advice when he thinks you’re going astray.

Were you surprised at how Adam Driver’s career is taking off?

I don’t think anyone who knows Adam Driver is surprised by how his career is taking off because he’s such a gifted, thoughtful, skilled person.

Was it difficult to keep him on the show?

Well, he has a contract, so he has to stay on the show (laughs).

Something I feel lucky about is that nobody has exhibited any diva behavior or decided they want to leave.

Do you feel a huge pressure for you to be just as successful in your next project after “Girls”?

I don’t feel it. My audience has a high bullshit meter.

So, do you have other things that you’re already planning?

Jenni Konner, who’s not here with me today, is my partner in running the show. We are hoping to start making some films this year.

Then, we’re also going to continue to work on Lenny Letter, which comes out twice a week.

We also have a publishing imprint that we’re launching with Random House. I’m going to write another book.