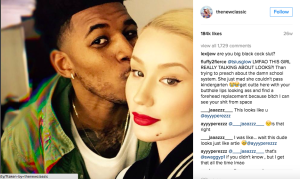 “Swaggy P’ and Iggy are no longer getting hitched.

Citing a report from the Washington Post, the 26-year-old rapper was “unable” to regain trust in her fiance,  after the 31-year-old baller had been secretly caught on video by teammate D’Angelo Russell appearing to discuss his relations with other women.

The recorded video, which emerged in March, caused a major rift in the Los Angeles locker room, with Russell, a prized rookie, getting isolated by his teammates due to his ‘snitching’.

Azalea, meanwhile, took to Instagram to confirm the break-up. 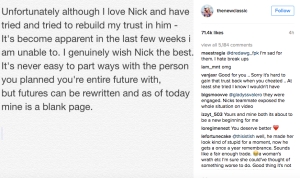 “Unfortunately although I love Nick and have tried and tried to rebuild my trust in him — It’s become apparent in the last few weeks I am unable to. I genuinely wish Nick the best. It’s never easy to part ways with the person you planned you’re [sic] entire future with, but futures can be rewritten and as of today mine is a blank page,” she wrote.

Young, on the other hand, kept it short with a one word tweet on Monday.

The pair started seeing each other in 2013 and announced their engagement two years later.

Azalea, who’s born Amethyst Amelia Kelly,  even posted a photo of a birthday card last week, apparently from Young, that read, “I love you so much that I hate but I still love U.”

She wrote in the caption, “I love you so much I hate you too,” with the hashtag “#whenbaemad.”

I love you so much I hate you too @swaggyp1 #whenbaemad

Young recently finished his third season with the Lakers, his 9th in the league, while posting a career-low .339 shooting percentage, including .325 from three-point range.

Prior to suiting up for the purple and gold, he was drafted by the Wizards in 2007 and has also played for the Clippers and the 76ers. Khristian Ibarrola