Teenage Ali fan’s story: How I met ‘The Greatest’ 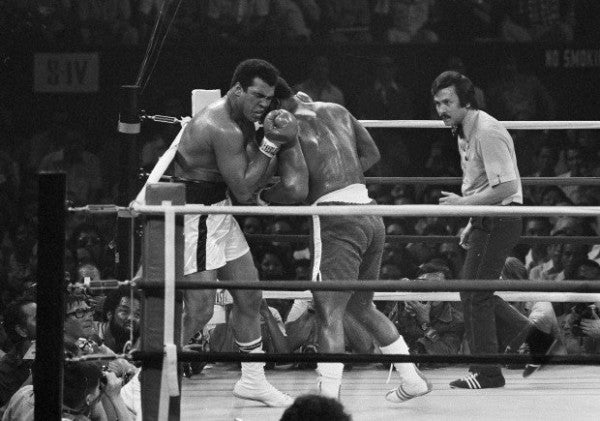 FINAL ENCOUNTER The brutality of what has been described as the greatest heavyweight fight in history is shown in this toe-to-toe combat between Muhammad Ali and Joe Frazier at the Araneta Coliseum on Oct. 1, 1975. It was 40 years ago and the “Thrilla in Manila” still lives in sporting lore. The referee was Carlos “Sonny” Padilla Jr., now 82 years old. AP

Even as I grieve over the death of Muhammad Ali along with millions of people around the world, it is with a smile that I remember the day I was introduced to the boxing legend.

It was on Oct. 2, 1975—the day after the classic “Thrilla in Manila” heavyweight title championship between Ali and his challenger Joe Frazier.

“Ali, a fan is here to meet you,” his lawyer Albert Griffin announced as we entered the jam-packed presidential suite of the then Hilton Hotel on United Nations Avenue, Manila.

A hospital bed, with a half-undressed Ali lying on it, was wheeled toward me.  A white blanket covered him from his waist down.

As I stood in front of Ali, my heart pounding wildly, I could see his swollen face and the bruises all over his upper body.  My heart went out to him.

He managed to smile at me when Griffin introduced me.  “This is Jenny. She wants your autograph.”

“Congratulations, Mr. Ali. Will you please sign this?” I blurted out as I handed him my copy of the book “I am King: A Photographic Biography of Muhammad Ali.”

But, first, let me relate how I got that rare chance to meet Ali face-to-face.

I became Ali’s fan after reading his story in Life Magazine when I was in Grade 6. More than his “wit, grace and beauty,” I was fascinated that he stuck to his objection to fight in the Vietnam War although it caused him his heavyweight crown. Since then, I had closely followed his career, making sure to watch all his boxing bouts on television.

So when I learned that Ali was coming here for the hugely publicized “Thrilla in Manila” match, I vowed I’d do everything to be able to meet him and ask for his autograph.

About two weeks before the fight, my father accompanied me to the Folk Arts Theatre to watch Ali’s training session.  I thought getting an autograph would be a breeze at the end of the training session.

To my dismay, there was no autograph-signing for fans. I tried to sneak past Ali’s bodyguards and into the cordoned-off training area, but failed. The audience chanted, “Ali! Ali! Ali!” as the Greatest was whisked away.

The next day, I poured out my frustrations to Benjie Somera, my friend and schoolmate at the University of the Philippines. I shared with him my plan to stake out the Hilton lobby to ask for Ali’s autograph.

Also an avid Ali fan, Benjie joined me at the hotel the following day. We brought with us our books and notebooks so we could review for our final exams (scheduled that same week) while waiting.  We spent almost an entire day in the hotel lobby, but not a shadow of Ali did we see.

We went back the following day—again keeping close watch while reviewing. Still no Ali.

On Day 3, I had to go to the hotel by myself because Benjie had an exam. After two hours of waiting for Ali and nothing happened, I decided to end my stakeout.

Then I remembered the story of a sports writer who got an exclusive interview with Ali through his lawyer. I went to the front desk and tried my luck. To my surprise, the male receptionist gave me Griffin’s room number—no questions asked. Well, that was easy, I thought. That gave me the courage to go up to Griffin’s room.

I tentatively knocked on the door. “Yes? What can I do for you?” a lovely African-American woman asked.

She let me in and asked why I was looking for her husband. I told her I was Ali’s avid fan and I needed her husband’s help to acquire an autographed picture of the champ.  I said that was my biggest wish for my birthday, which would be a few days away.

She told me her husband was out somewhere with Ali and to come back the day after the fight.

Sure enough, I was back at Griffin’s door the day after the epic fight that Ali did not quite easily win.

“Honey, this is Jenny, the girl I was telling you about,” Griffin’s wife told him.

The tall, heavily built lawyer handed me an 8 x 10 inch black-and-white picture of Ali in a formal suit. I couldn’t hide my disappointment when I saw it was unsigned. Please, I asked, could I have the champ’s autograph on the picture as well as on the book I brought with me?

Next came the unexpected. “Would you like to meet Ali?” Griffin said.

“Of course!” I replied almost instantly, trying not to faint from sheer excitement.

I was on cloud nine in the elevator going up to Ali’s suite. We found hordes of newsmen outside the heavily guarded room. A security guard tried to block my way as I followed Griffin to the door.

“No, this girl’s with me,” he told the guard, grabbing my right wrist.

Then we entered Ali’s room and I finally got his autograph. Success felt mighty sweet!

Before leaving, I told Ali: “I have something for you.”

Ali, the No. 1 boxer in the world rewarded me with a big smile after seeing what I had handed him: An autographed picture of his “No. 1 fan in the Philippines–Jenny.”

Read Next
Anna Kendrick: ‘Scrappy Little Nobody’
EDITORS' PICK
DOH: Too early to say COVID-19 cases are declining
Over 3 Million worth of prizes to be won at Smart Padala’s SENDali Manalo Promo!
Gov’t rolls out COVID-19 vaccination in select pharmacies on Jan. 20 to 21
COVID-19 cases in City of Manila are decreasing, says OCTA
The best of bayside and city living at SMDC’s Sail Residences
Acer starts the year off strong with the Aspire Vero National Geographic Edition
MOST READ
Comelec junks petition to scrap Bongbong Marcos COC
Marcos Jr. visits Cebu, stands as ‘ninong’ to mayor’s son
In Batanes, octogenarian dies of COVID-19
Duterte praises military but slams police for poor discipline, corruption
Don't miss out on the latest news and information.