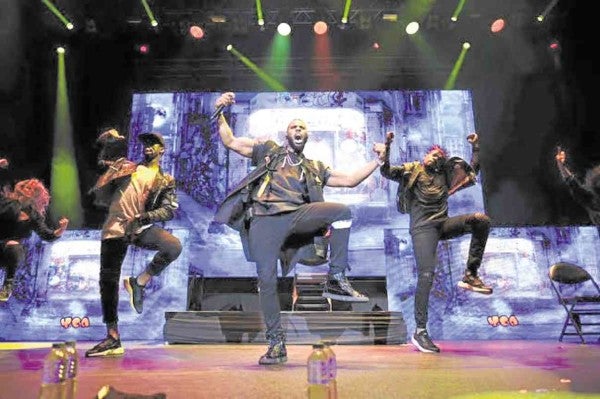 If there was one number that would best encapsulate Jason Derulo’s recent Manila concert, it would be the R&B-inflected club anthem, “Breathing,” which came midway through the international pop star’s dynamic, 16-song set.

He peeled off his shirt, revealing a well-toned torso as he sang and burst into sequences of forceful choreography. He then did a pirouette, his feet seemingly defying friction, right before he launched into a full-blown dance break that had everyone at the SM Mall of Asia Arena roaring with approval.

Since going solo in 2009, Derulo, a 26-year-old American pop-R&B artist, has notched several platinum-selling singles—most of which well-crafted earworms such as “Wiggle,” “Talk Dirty,” “In My Head” and “Want to Want Me.”

His materials are already infectious as they are. It is, however, the sheer athleticism that Derulo unfailingly brings onto the stage that makes watching his live performances a more rewarding experience.

And there was no shortage of such displays in this recent concert, mounted by Wilbros Live. Whether he was doing a whimsical, midtempo bop, like his opener, “Trumpets,” or a more thumping, urban-flavored banger like “Get Ugly,” Derulo’s body never stopped moving.

His feet were constantly doing quick, little half-steps; his hand doing deft mic flips every once in a while.

In 2012, Derulo was forced to cancel a world tour when he suffered a neck injury that left him nearly paralyzed, after attempting an acrobatic move during rehearsals. 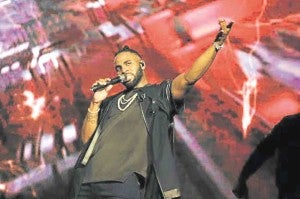 Such career-threatening incident would have most artists erring on the side of caution. Not Derulo. And even if he did, it certainly didn’t show.

Derulo’s moves were alternately fluid and spastic—he krumped and moonwalked; he twirled and contorted his body into angular forms.

One minute, he was leaping and kicking midair, the next one he was on the floor doing a split—all the while maintaining enough breath support to tackle his repertoire that was a heady brew of pop, dance, R&B, hip-hop and a touch of rock and electronica.

Though a very competent singer, Derulo’s vocal abilities weren’t quite at par with his explosive stage showmanship. He shied away from huge belted notes or intricate runs, instead preferring to deliver climaxes with his sweet falsetto, which he utilized to great effect (read: making the ladies swoon).

In the saccharine “Marry Me,” Derulo dropped on one knee, as if proposing marriage to each giddy fan inside the venue.

Near the end of the concert—which was fronted by American DJ Redfoo, formerly of the EDM duo LMFAO—Derulo plucked a girl from the crowd.

Sitting onstage, Derulo looked straight into the woman’s eyes and serenaded her. Then, to deafening shrieks, Derulo pulled out a towel and handed it to the visibly ecstatic woman. She needed no instruction: Swiftly, she wiped the sweat off Derulo’s abs.