Emilia Clarke will win hearts, not ‘Thrones,’ in new film 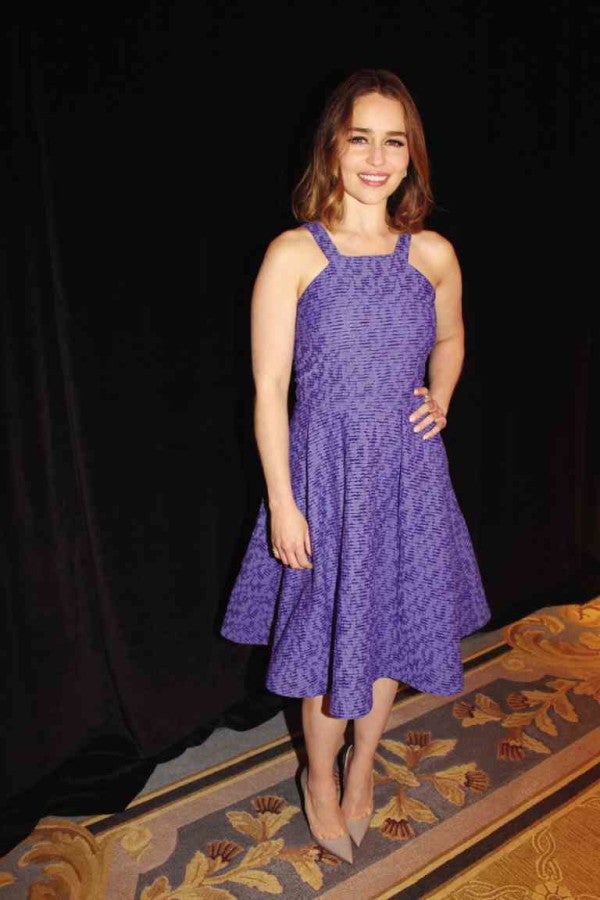 The London native conceded that Louisa “Lou” Clark, her caregiver character in the film adaptation of Jojo Moyes’ acclaimed novel, “Me Before You,” is the most similar to her of all the roles she has played so far.

“I do more acting on ‘Game of Thrones’ than I did on this one,” she admitted, breaking into her boisterous laugh, which was like a ray of sunshine in this windowless basement meeting room of the Ritz Carlton Central Park Hotel.

Her thick eyebrows are as animated as they are in “Me Before You.” Those eyebrows have a life of their own and deserve billing credit, especially when they are used by Emilia to beseech Sam Claflin’s William “Will” Traynor, a paraplegic under the care of Lou.

In this love story, a romance blooms between Lou and Will. But he has decided to end his life by assisted suicide in six months; she tries her best to make him change his mind.

There’s one thing Emilia doesn’t have in common with Lou, who has a quirky fashion sense and loves bumblebee tights. “There’s a difference, but I love clothes as much as Lou does, that’s for sure,” said Emilia, who was fetching in a blue lace strap dress.

Was it more liberating to be your “natural” self in this film?

Yeah, it was incredibly freeing.  I got to just be who I am.

How has this movie’s story opened your eyes and to live boldly?

It has opened my eyes a huge amount about it. It’s something that I like to live by, anyway—to live in the uncomfortable part of life, the bit which scares you. Living boldly for me is taking a day off (laughs).

What’s your take on euthanasia or assisted suicide?

Everybody has an opinion on it. After making this movie, I now have an educated view about it, which is different from just having an opinion. We did so much research about it and watched a number of documentaries, including Terry Pratchett’s  [“Choosing to Die”].

So, are you for or against assisted suicide?

Everyone has a right to choose, so we’re all fortunate enough to have this right.

Would it have been better if a psychiatrist was brought in to help Will?

What drives you nuts in real life?

There’s one thing that really drives me bonkers (laughs). I come from a family of snorers. As I grew up, I could hear my dad snoring. Even if I was on the top floor of the house and he was downstairs, I could still hear him snoring.

Your character squeals with delight upon receiving bumblebee tights. What delighted you when you were a kid?

I had a dress that my mom got me for Christmas when I was 2, 3 or 4 years old. It was velvet, and it had this satin waistband. It was blue, had little cute things and bells on it, so I made a noise. As you can see, I like to make noise (laughs). I wore that come rain or shine until it was removed from me.

Lou has a selflessness about her. Do you share that trait?

I care deeply about my family and friends…Lou’s warmth and her desire to take care of people is  something that I have—and I enjoy doing it.

Did you get to talk to caregivers in similar scenarios?

We had a good three months of research and rehearsal time before we started filming this movie.

We met a wonderful man, who’s a quadriplegic, and his wife. When I began my research, I went to quite a few fora for caregivers to get an understanding of what they have to go through day to day, because that’s the most enlightening and grueling part of it.

Can you talk about the female energy in both this movie and “Game of Thrones”?

“Game of Thrones” has a broad range of strong women, which is wonderful. We keep seeing them getting stronger and stronger.

With “Me Before You,” Lou is actually an incredibly strong girl in her own way. Director Thea Sharrock and writer Jojo Moyes are women. There was a lot of female heads of department. It was a terribly feminine set.

There’s talk of “GoT” spinoffs. Which characters would you like to see in them?

Tyrion could definitely have his own spinoff. Or Maisie Williams’ character—Arya—that would be pretty amazing, like a superhero series.

There’s a big story about the return of Jon Snow.

Yes.  I am terrible at lying.

At what point did you know, though?

We finished filming. I read the script and called Kit (Harington). He was like, “It’s real.”

How has fame affected you?

It has changed my life, that’s for sure. I’m protected because I don’t wear the wig (from “GoT”), so I’m almost unrecognizable. I’ve been able to observe success from a distance, which has allowed me to be more grounded than people who would be instantly recognizable on the street.

How do you spoil yourself?

I like to shop. I’ve got really nice clothes.

Who inspired you to go to drama school and succeed?

Myself. As a kid, I was incredibly unsure and didn’t have much confidence. But the thing that never, ever went away was my absolute earnest knowledge that I was going to be an actor.

Can you talk about your life away from the cameras?

I don’t have a boyfriend. I’ve got a fulfilled career, so my downtime is few and far between.

What kind of art interests you?

I studied the history of art at school… Architecture fascinates me. And photography—all of it.

What’s the craziest thing you have ever done for love?

(Laughs) I was a teenager, so it was the first love. I remember I sat outside his house in the rain because we had a fight. I got sick so, yeah, that was pretty stupid.

What are your summer vacation plans and most cherished vacation memories?

We did like walking holidays to the Outer Hebrides in Scotland. I took my first beach holiday vacation with my best friend last year. I have another one coming up.

Can you talk about your backpacking trips in your teens?

I did backpacking when I was from 16 to 19. Backpacking allows you to really get to see the heart of a country.

What countries did you go to?

I did Northern India.  We flew into Delhi, and I went all the way up to almost into Tibet. I did all of that when I was 16, then at 18, I did Southeast Asia—Thailand, Cambodia, Laos and Vietnam. And then South Africa.

Are you planning to work in New York?

Yes, definitely, because I did “Breakfast at Tiffany’s” on Broadway a couple of years ago. But I really want to go to the West End to take it back home.

As soon as I finish this [media promo] tour, I go back to continue filming a movie called “Blood Mountain.” I play a drug addict in a trailer in Kentucky, so this is something really different.

TAGS: “Me Before You”, Emilia Clarke, Game of Thrones, movie