If Donald Trump held a concert, who might perform? 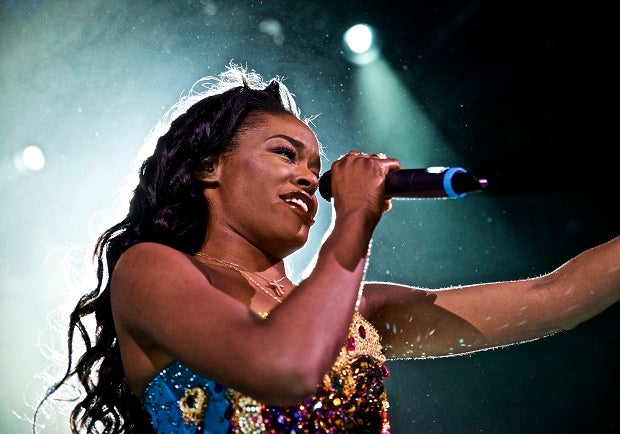 In this May 11, 2015 file photo, Azealia Banks performs in concert at Irving Plaza in New York. Banks, like Donald Trump, is outspoken and often criticized for her opinions. That makes the rapper the perfect person to perform at a Trump concert. AP FILE PHOTO

Instead, he’s found himself on the flip side of friendship since he announced his candidacy last summer, with musicians from Adele to the Rolling Stones asking Trump to stop using their music at rallies and in campaign ads. Despite that, Trump wants to mix things up during the four-day Republican National Convention in July, where he says concerts could be useful to break up “plenty of political speeches.”

“The concept of some entertainment from a great singer, a great group I think would be something maybe to break things up,” Trump said in an interview this week with The Associated Press.

READ: How Trump broke the rules of modern politics, and won anyway

Here’s the short list of musicians who could potentially offer their talents at a Trump event.

While he’s probably struggling to sell concert tickets, Aaron Carter could find a new platform on a stage for Trump. The baby bro to Backstreet Boys’ Nick Carter first said he was ready to vote for Trump but later changed his mind. “I’ve been bullied so badly because of it I don’t even want to vote now,” he tweeted. But would Trump endorse Carter singing his 2000 hit “Aaron’s Party (Come Get It)” in 2016? He may not have a choice. He’s got slim pickings.

If there’s anyone who can make Trump seem sort of hip, it’s Kid Rock. The candid Detroiter, who supported Mitt Romney in 2012, told Rolling Stone magazine that Trump’s campaign was entertaining but he also trusted his business acumen. “Let the business guy in there. It’s not really working too well running it not like a business,” he said.

Following Rock, Loretta Lynn, 84, could easily be the headlining act and highlight at a Trump concert. In fact, Lynn was predicting a Trump presidency all the way back in December when she told Billboard that he would be the next leader of the US.

Wayne Newton, aka Mr. Las Vegas, has made it clear that when it comes to Trump, he’s thinking “Danke Schoen.” ”Number one, he tells the truth,” Newton told “Fox and Friends” in October about Trump. “He’s been where most of these guys want to be in terms of riding on his own plane. He doesn’t have to worry about what hotels he stays in. Doesn’t have to worry about how his family gets to Hawaii, so on and so forth.”

Rapper Azealia Banks, like Trump, is outspoken and used to taking heat for her opinions. In fact, her endorsement of Trump in February was part of a series of tweets, including one that said “I think Donald trump is evil like America is evil and in order for America to keep up with itself it needs him.” Just one problem though: it would be difficult to actually name a Banks song as she’s become more famous for her Twitter rants than her music.

Tila Tequila might be best known for her bisexual dating reality show and her anti-Semitic rants. But yes, she is a singer. Though not a good one. And Tequila has spoken highly of Trump. They also both have been at the center of controversy over questionable remarks: Trump was targeted early in his campaign for calling Latinos coming to the US from Mexico “killers” and “rapists,” while Tequila called Adolf Hitler a “brilliant artist” and has defended him in the past.

“Know it, Donald Trump is the hellraiser America has needed for a very longtime,” rocker and gun-lover Ted Nugent wrote on his Facebook page.