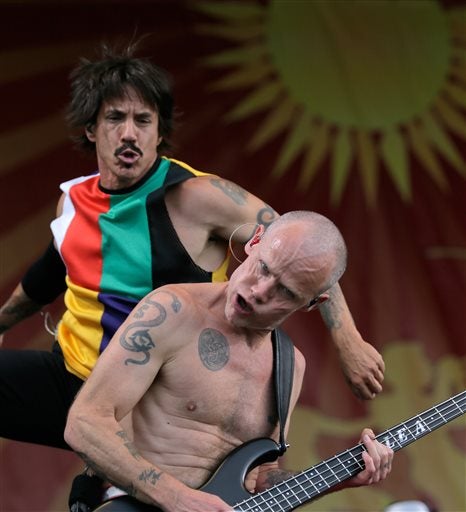 The Red Hot Chili Peppers perform on the Acura Stage during the third day of the New Orleans Jazz Fest at the Fair Grounds in New Orleans Sunday, April 24, 2016. (David Grunfeld/NOLA.com The Times-Picayune via AP)

The Los Angeles band, among leading figures in the alternative rock boom of the 1990s, said that its 11th studio album, “The Getaway,” would come out on June 17.

The Chili Peppers immediately put out a single from the album, “Dark Necessities,” which opens with a solo by bassist Flea before building over five minutes.

In classic Chili Pepper style, the rock style is infused with a subtle funky beat and the lyrics take a dark turn, with frontman Anthony Kiedis singing from the perspective of an addict needing a fix.

The album is the first by the Chili Peppers since 2011’s “I’m With You,” which brought in guitarist Josh Klinghoffer, who is a generation younger than his bandmates.

In a departure, the band did not work with veteran producer Rick Rubin, who has guided each of the band’s albums since 1991’s mainstream breakthrough “Blood Sugar Sex Magik.”

Instead of Rubin, a prolific producer of rock and rap known for his hard-edged sound, Red Hot Chili Peppers tapped Danger Mouse, another diverse producer whose background lies in hip-hop but notably worked on Adele’s blockbuster latest album “25.”

The Chili Peppers plan to promote “The Getaway” with a string of appearances at major festivals including Japan’s Fuji Rock, Roskilde in Denmark, Reading and Leeds in England and the 25th anniversary of Lollapalooza, which started as an alternative rock extravaganza that traveled the United States and now is held every summer in Chicago.

The Chili Peppers on Thursday announced additional dates, with the tour now scheduled to end October 16 at the Bercy arena in Paris.