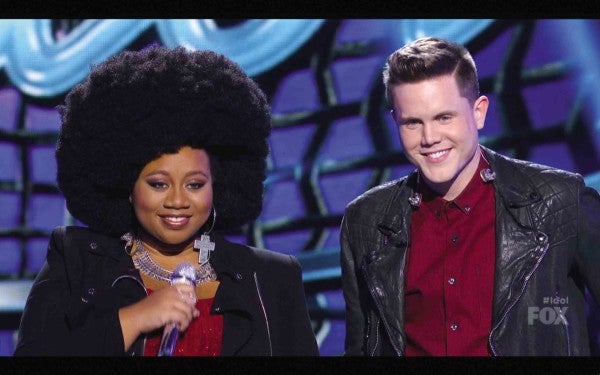 THE 15TH and final season of “American Idol” ended last weekend with viewer-voters’ choice of Trent Harmon as the 2016 champion and La’Porsha Renae as runnerup.

La’Porsha was our personal choice, but she lost to her younger rival due to his stronger and more focused appeal to the tilt’s generally “teen female” target audience and market.

But, not to worry, La’Porsha will most likely also become a star in her own right, despite her “distracting” girth, simply because she’s so darn good.

The 2016 season’s denouement calls to mind “in reverse” the year that the similarly portly Ruben Studdard was also named champion, with Clay Aiken in second place.

After Studdard’s victory was announced, however, his career didn’t do all that stellarly, and Aiken became the bigger luminary. That could happen to this season’s “loser,” La’Porsha, too, if she plays her career cards right.

All told, the tilt’s biggest stellar discoveries who have more than fulfilled their promise are Kelly Clarkson, Carrie Underwood, Fantasia Barrino and Jordin Sparks.

Nonwinners who have also become stars are paced by Jennifer Hudson, Katharine McPhee, Adam Lambert and Chris Daughtry. Instructively, some of them have also made it in film musicals and musical theater productions.

The talent tilt’s 15-year history has been a roller-coaster ride with more downs than ups, but viewers are generally grateful to the talent search because it has succeeded in providing a breakthrough showcase for many unknowns to “prove” that they deserved to become singing stars.

Other talent tilts have cropped up, like “The Voice” and “The X Factor,” but “AI” definitely had a good, long run.

On the “down” side, judge Simon Cowell was faulted for his exceedingly sarcastic critiques, which stressed out some of his “victims” while adding to his controversial “viewability.”

It’s a good thing the tilt’s last judges, Jennifer Lopez, Harry Connick Jr. and Keith Urban, focused more on objective and insightful critiquing, instead of calling attention to themselves.

Also happily a thing of the past is the show’s off-putting tendency to focus on bad singers’ auditions, to derisively comedic effect—as illustrated by the thankfully brief notoriety that William Hung “enjoyed.”

So, “American Idol” has ended its long run on the right side of pop history.

Quite tellingly, one of its most durable stellar finds is no less than its very first winner, Kelly Clarkson, who continues to come up with hit songs and shows. She proves that the talent search’s penchant for discovering real performing gold is no fluke.

Some of its crowned and anointed “idols” have turned out to have feet of sullen clay, but a good number are here to stay.