Jeremy Renner back as Hawkeye in ‘Captain America: Civil War’ 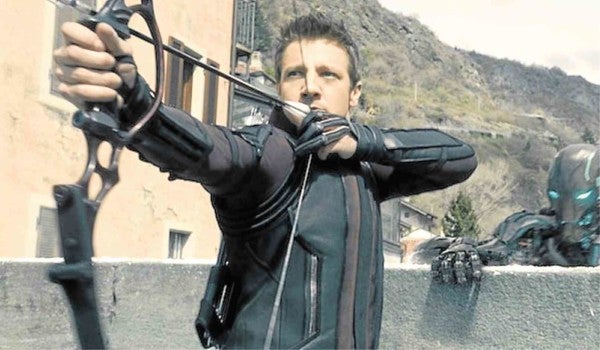 RENNER as the archer Hawkeye

LOS ANGELES—Imagine you’re in front of a urinal, answering nature’s call, and a guy asks you to have a selfie with him right there. Jeremy Renner said in our recent conversation that this scenario is happening more frequently.

“Bad timing, really,” the actor quipped in an understatement.

Jeremy is back with his bow and arrows as Hawkeye in “Captain America: Civil War.” We asked him when he is doing the sequel to the hit film, “The Bourne Legacy,” where his Aaron Cross displayed mastery of Filipino stick fighting in the scenes shot in the Philippines.

The Oscar- and Golden Globe-nominated thespian was paired in the interview with Elizabeth Olsen (whom he calls Lizzie), who plays Scarlet Witch in “Captain America: Civil War.” Both their characters belong to Team Captain America (Chris Evans).

For me, the only time that is weird is in the men’s bathroom (laughs)—at a urinal when someone wants to do a selfie with me. It happens every day of my life.

There is a weird entitlement with some fans nowadays, where sometimes they get offended for not being able to take a photo with you. I’m all about taking pictures with people, but in appropriate places. Never in a bar or a restaurant. 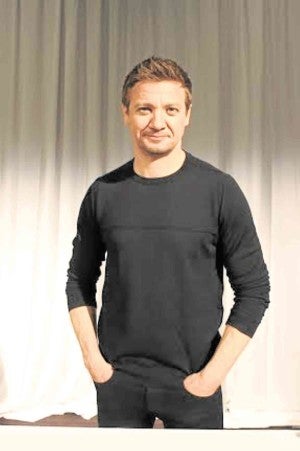 RENNER is open to doing another “Bourne” film. Photo by Ruben V. Nepales

How was your Hawkeye costume updated for this movie?

The main thing that changed for me were the pants. I was splitting the pants a lot (laughs), so they changed to this more flexible material. So I wouldn’t offend people when I’d bend to do something crazy.

The color is different, and I have a sleeve now, instead of [my costume] in “The Avengers,” where I was sleeveless. I liked this costume the best. It was the most comfortable.

There’s a practicality to that character, anyway—and a utility to all the stuff that is on his visor. There’s a reason for it. It’s not just that it’s a cool fashion and a cool costume, but it’s fairly practical stuff. And it has all the same stuff you would need for the bow and arrow and all that.

Do you watch superhero movies?

I love them, but I just don’t have time to really sit and watch a movie these days. I haven’t seen a movie in probably two or three years. My baby takes my time (laughs).

Lizzie and I are now doing a smaller film called “Wind River,” which is character-driven—it’s a drama-crime thriller. We’re having a ball doing that.

It’s also fun to shoot these big movies, because there are all those stunts and fun things. The craft services are better—the food is better.

The cast is amazing in a movie like this. But shooting a smaller movie is more fulfilling as far as diving into a character in a deeper way.

Did working again in “Wind River” happen serendipitously, or did one suggest the other?

Lizzie was on the movie for a while, for about a year. Then, it came around my way. I was trying not to work. But because Lizzie was on it and I wanted to work with her, I finally read the script.

It was a great opportunity for us to work together in a very real way. It’s been really wonderful.

What I like about it is that it’s an insular world. It’s a very specific region on an Indian reservation, Wind River, in Wyoming.

It’s about the plight of the natives in this country and has a “Winter’s Bone” feel…that very specific world. This isn’t too dissimilar. So, it’s about the interesting characters in this world.

There’s a crime thriller plot to it. The characters are all going through their own mourning for a tragedy that happened in the beginning of the movie.

(Elizabeth added, “It is about a girl who is found dead on a reservation in the middle of the snow. I’m a young federal agent who comes in, trying to figure out what happened to her and why. Jeremy plays a man who tracks animals and takes care of the land. I ask him to help me, because he knows the land better than I do.”)

When is Aaron Cross coming back? What’s the latest on your “Bourne” sequel?

I really enjoyed that character, Tony (Gilroy, writer-director) and the whole gang. It was awesome, and I had a lot of fun shooting that. We looked down the road at some things, where to go and tried to figure it out.

I know (Paul) Greengrass (writer-director) and Matt (Damon) were jumping to do one (“Jason Bourne”), so I think that (his own “Bourne” sequel) got put on hold. I am not sure if it comes back around.

I would be ultimately making those decisions. But I am certainly open to the idea of it, because I love the character and that world. We’ll see what happens.

Did you name your daughter Berlin because you have a special relationship with that city?

Yes, because Berlin is one of my favorite cities. I shot “Hansel & Gretel: Witch Hunters” there. I love Berlin. Berlin was going to be her first name, but I didn’t want anybody shortening it to Lin or something else.

So I gave her a very simple (first) name (Ava), a palindrome like my last name. I thought that was cool. So, I gave her an interesting second name.

Have you brought your daughter to Berlin?

She’s been to London, but she hasn’t made it to Berlin yet. Fans send over fun things from Berlin, which is great. Little purses and stuff.

EDITORIAL: Raise the age of consent