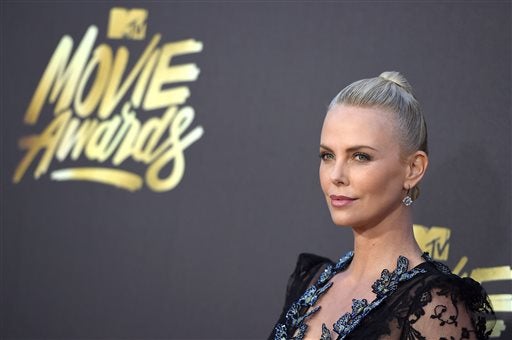 BURBANK, California — Will Smith told fans at the MTV Movie Awards that he is “dedicated to being a light in this world.”

Smith’s heartfelt acceptance was a respite of sincerity amid an expletive-laden show that featured more F-bombs than awards.

Hosts Dwayne Johnson and Kevin Hart opened the program “Mad Max” style by riding through Warner Bros. strapped to the front of a tricked-out truck. Later, they performed a rap song about the year’s films that repeated the refrain “Leo got (expletive) by a bear” in reference to “The Revenant.”

Ariana Grande and Halsey provided the evening’s other musical performances.

“The story of ‘Fury Road’ is in part a story of the power of women and the power to create our own destinies,” Theron said before accepting the award in her daughter’s name.

“It feels especially amazing to be part of a film that reps all genders… races and ages in such a positive and aspirational way,” she said.

Chris Pratt won the action performance award for “Jurassic World.” Amy Poehler was recognized for her “virtual performance” as Joy in “Inside Out.” ”Straight Outta Compton” won the true story category. Ryan Reynolds won for his comedic performance in “Deadpool,” which he said “was not all unicorns and cocaine” during production.

The MTV Movie Awards serves as a marketing platform for summer movies. Most presenters were principals from upcoming film. Theron took the stage with Jessica Chastain and Chris Hemsworth, her co-stars from “The Huntsman: Winter’s War.” Anna Kendrick presented with Zac Efron and Adam Devine — the three star in “Mike and Dave Need Wedding Dates.”