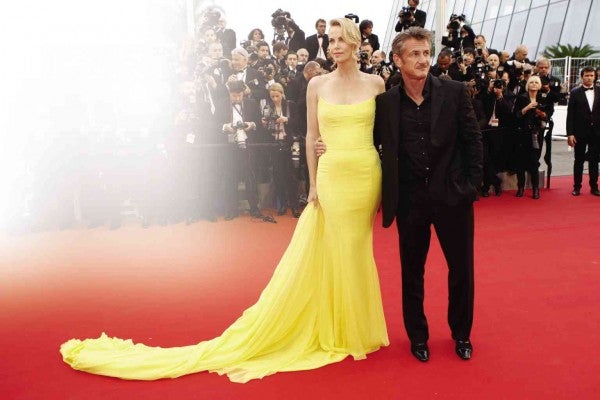 WITH Sean Penn on the red carpet before the “Mad Max” screening at Cannes. “We make life better for each other.” AP

But Charlize paid the highest compliment to Tom for his total dedication, especially when they engaged in a brutal fight scene. “Tom doesn’t hold back,” declared the statuesque actress in an interview at the Siren Studios in LA. “He’s in it, in the truest sense. He is focused and committed. You cannot be a pushover when you are working with him. You have to bring your armor, which is what this movie needed. It couldn’t feel like Max was taking it easy on her. We just couldn’t have that happen.”

According to the newly minted action movie queen, the no-holds-barred duel gave her a solid idea of the kicka** movie they were making in the Namibian desert. “The fight scene was hard just because it was really early in the shoot,” said Charlize, looking so different from her Furiosa character—she wore a Giambattista Valli top, short Balenciaga skirt and Yves Saint Laurent shoes.

“We almost started filming the movie with that scene so it was like, whoa, okay, now I know what movie we are making. It was good because it set the tone. From there on, we knew what the movie was going to be.” 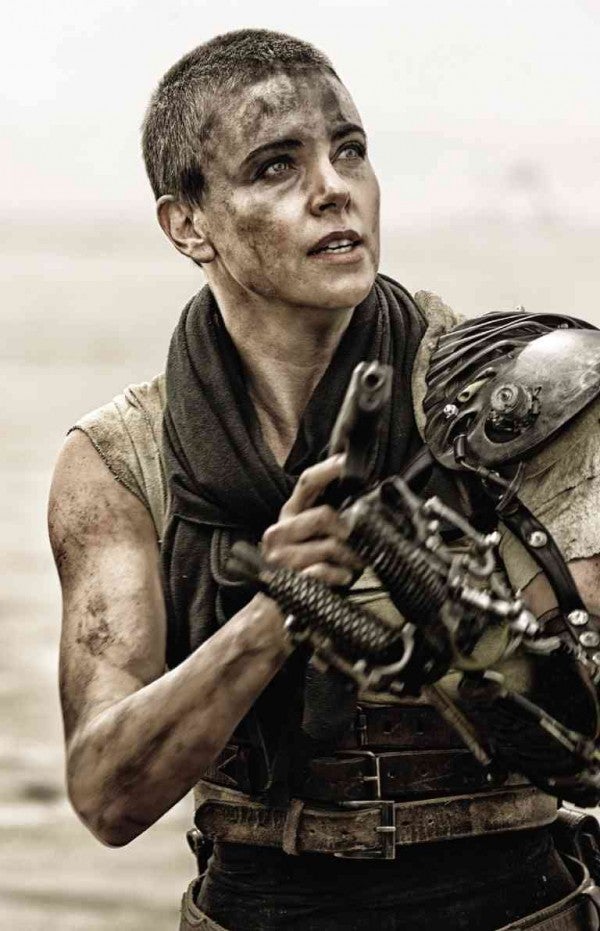 ACTRESS, who plays a rogue warrior in new film, admits that she hates movies where “scrawny girls” beat up bigger guys. “We are supposed to believe that? So the physical part was just for my own truth.”

Even though she had “neck issues” (she suffered a herniated disc in her neck while shooting “Aeon Flux”), Charlize plunged headlong into the scene, one of many stunning scenes in the film which set new standards in the action genre. “You don’t want that to be the stuff that holds you back from an amazing stunt fight,” she stressed. “But Tom was really reassuring in saying that we don’t have to hurt each other to have a bada** fight scene. We had a lot of preparation.”

Charlize underwent an intense strength training to look and feel the part of a warrior who escapes from an abusive tyrant, Immortan Joe (Hugh Keays-Byrne) and takes with her his five wives. She explained, “I am not a fan of scrawny little girls pretending to kick butt in movies. I just don’t buy it. I hate those moments in movies where the tiniest little arms are hitting a guy who is four times her size. We are supposed to believe that that happened. So the physical part for me was just for my own truth.”

But she admitted that shooting “Fury Road” was the hardest movie she has ever done. “It was just too exhausting, too hard. It was a 130-something day shoot, 14-hour days, two-hour commute back and forth from work. I had a young son (Jackson, whom she adopted in 2012) who wasn’t yet fully sleeping during the night. So I was sleep-deprived.

“And I was working really hard. Then to fit an hour or 45 minutes every day to maintain that strength training was so relentless. It felt like it never stopped. It was definitely the hardest thing that I ever had to do in 20 years. It was so long and there are days when you just want to break and you couldn’t get that in this movie because you were in it all the time. When I see the movie, there are lots of times when I can see my own pain in the film.”

The challenges were worth it. Charlize, Tom and Nicholas Hoult gave worthy performances that are already generating acting awards nominations buzz. Charlize and her fellow actors’ accomplishment—and George’s feat as a director—is that even amid the spectacular action scenes, the human, emotional element is never missing.

“It was very clear to me that George wanted a movie that was visceral,” Charlize answered when we asked how she kept Furiosa a very human figure, especially in the emotions she expressed often solely through her eyes.

“The scope was very cinematic,” she elaborated. “But he wanted the characters’ emotions to be the engine that would drive the story. We didn’t really get to have a whole lot of dialogue. So we had to rely very heavily on really knowing who we were playing and what was driving them because it had to sustain the story. Otherwise, it would be like, I am just watching a car chase and nothing is emotionally grabbing me into this.

“I spent a lot of time just being clear about the objective (of Furiosa) and that was, not to die. This kind of primal brain that you are born with kicks in for her and she realizes that she can die at any moment.”

Charlize offered her own back story as to why Furiosa ran away with Immortan Joe’s five “breeders,” which triggers the high-octane chase across the desert. “I personally used a lot of stuff between Immortan Joe and Furiosa which is not really explained in the movie. It was stuff that George and I had spent a lot of time on as far as her backstory [is concerned]—how he abused and then discarded her in a horrible way might be the reason why she lost her arm. That was her story of revenge, why she was going to take revenge on this guy.

“Then it becomes a little gray why she takes these girls. It could seem very heroic—she wants to take these young women to a better place. I thought there was something maybe more personal there, that she was going to try and hurt him in the same manner that he hurt her. Then it’s not just like, ‘I am going to save these young girls.’ It’s like, ‘I don’t really care about you guys but I am taking you because I know what is going to hurt him.’

“So we played in a lot of those gray zones that you really don’t overexplain in the movie. But emotionally, you can see that there’s conflict, that she’s struggling with stuff. I tried to keep that as alive as I possibly could in the movie.”

Charlize thinks that ultimately, her action heroine just “wants to save herself. There’s something beautiful in that honesty. When a world is that harsh, your survival is the only thing you can think of. That is sometimes what we forget in these postapocalyptic films—just how brutal it would be just to be able to take care of yourself. That’s what I love about Max and Furiosa. They are these rogue warriors who have been on their own for so long because they cannot trust anybody.

“Nobody is really looking out for you. Because of their isolation and survival skills, they have lost their social graces. You throw them in a vehicle with each other and they are stuck together. It’s like, I really don’t want you in this car. This idea of having to rely on other people, they don’t like it.” 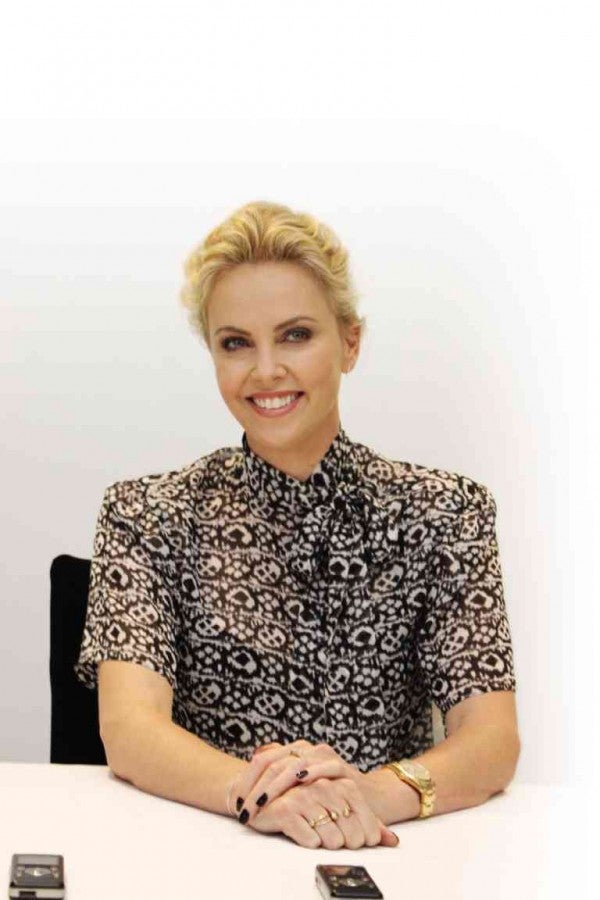 On a lighter note, Charlize, who volunteered that she has a “very strange sense of humor,” shared an incident involving no less than the Potus (President of the United States). “People who know me really well can just pick up on it when I get nervous,” she said. “They are like, ‘Oh my gosh, she is going to say the most inappropriate thing.’ I recently met President Barack Obama in a hallway. I was so nervous and I said the most inappropriate thing. I am not going to repeat it. I apologize, President Obama.”

Laughing, she added, “When I get nervous, I guess to deflect it, I just say inappropriate things.”

Charlize was surprisingly candid about her relationship with actor-director Sean Penn, which began in early 2014. “I was a happy person when I met Sean,” she began. “I think that’s why we fell in love. He fell in love with me because I am a happy, fulfilled person who has a healthy dose of love for myself. I love Sean and our relationship because we make life better for each other.

“I feel very lucky that at this time in my life, I can call myself a mom to a beautiful little boy, that I have met the love of my life and that I get to work on movies like this. There’s not a moment that I don’t realize how incredibly blessed and lucky I am.”

Of “The Last Face,” a drama where Sean directs her, Javier Bardem and Jean Reno, Charlize gushed, “It’s really a beautiful film. What Sean did in the preproduction and in the development process just took the film to another level. He just escalated it, in a sense.

“Sean made the film look like a hundred million dollar movie but that’s not what we had at our disposal. Sean set the bar really high and Javier and I tried to stay with him as much as we possibly could. Something happens to Sean when he starts to work. It’s like a gear up here and you are constantly trying to get up there.”

On reports that Charlize does not want to go on the “Fury Road” again, there was talk of a sequel titled “Mad Max: Furiosa,” she was emphatic in her answer: “It just gets blown out of proportion. All I have said is that I don’t live my life putting the cart before the horse. I don’t know what’s going to happen. That’s like assuming George and Warner Brothers want to do one.

“I might own an orange stand in three months—who knows what’s going to happen? What’s important is to do things for the right reasons and not because there should be a sequel. If the chips fall into the right place, then of course, I would love to be in this [next] film.”