John Legend excited to be a daddy 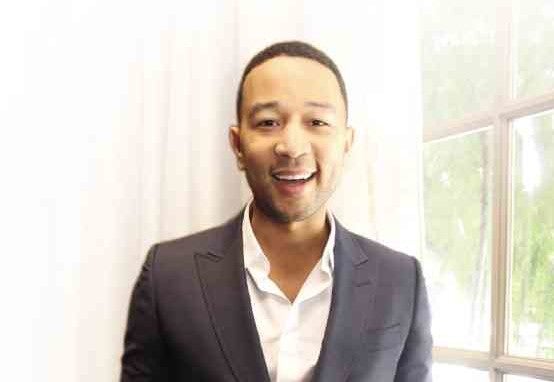 LOS ANGELES—John Legend is ready and excited to become a dad to a baby girl he and his wife, Chrissy Teigen, are expecting in mid-April. The Grammy, Oscar and Golden Globe-winning singer-songwriter said he is “going to do whatever” he can “to be helpful” to his spouse, a popular model, TV show host and cookbook author.

It will be the first child for both John and Chrissy, who married in September 2013. Daddy will be an addition to John’s list of titles, which includes singer, composer, musician, producer and actor (he joins Ryan Gosling and Emma Stone in the musical, “La La Land,” Damien Chazelle’s first directing job since his acclaimed “Whiplash”).

The charismatic crooner behind “All of Me” is also emerging as a committed producer of films (he’s the executive producer of “La La Land”), Off-Broadway plays (the ongoing “3 Mics” and the coming “Turn Me Loose”) and TV shows.

John’s latest credit as a TV producer is WGN America’s “Underground,” which has been earning generally favorable reviews. The drama series, which follows a group of slaves as they try to escape from a Georgia plantation to freedom, stars Jurnee Smollett-Bell, Alano Miller and Christopher Meloni.

A child music prodigy, John is the son of a seamstress and a factory worker who was a former national guardsman. He started learning to play the piano at age 4 and began singing with a church choir when he was 7 years old. At 12, John attended North High School (Springfield, Iowa), where he graduated salutatorian. He was offered admission to Harvard and Georgetown, but he chose University of Pennsylvania.

Working actively to make a difference in people’s lives, John is passionate about several causes, including education reform. He launched the Show Me Campaign, an initiative that stresses education as a key to break the cycle of poverty, and the #freeAmerica campaign, aimed at changing the national conversation of the United States’ policies and to reform America’s criminal justice system.

In addition, John serves on the boards of Teach for America, Education Equality Project, Stand for Children and Harlem Village Academies. He also supports LRNG, a movement committed to inspiring innovations in the learning process.

Poised and very articulate, John was smartly dressed in a suit and white shirt in our chat. 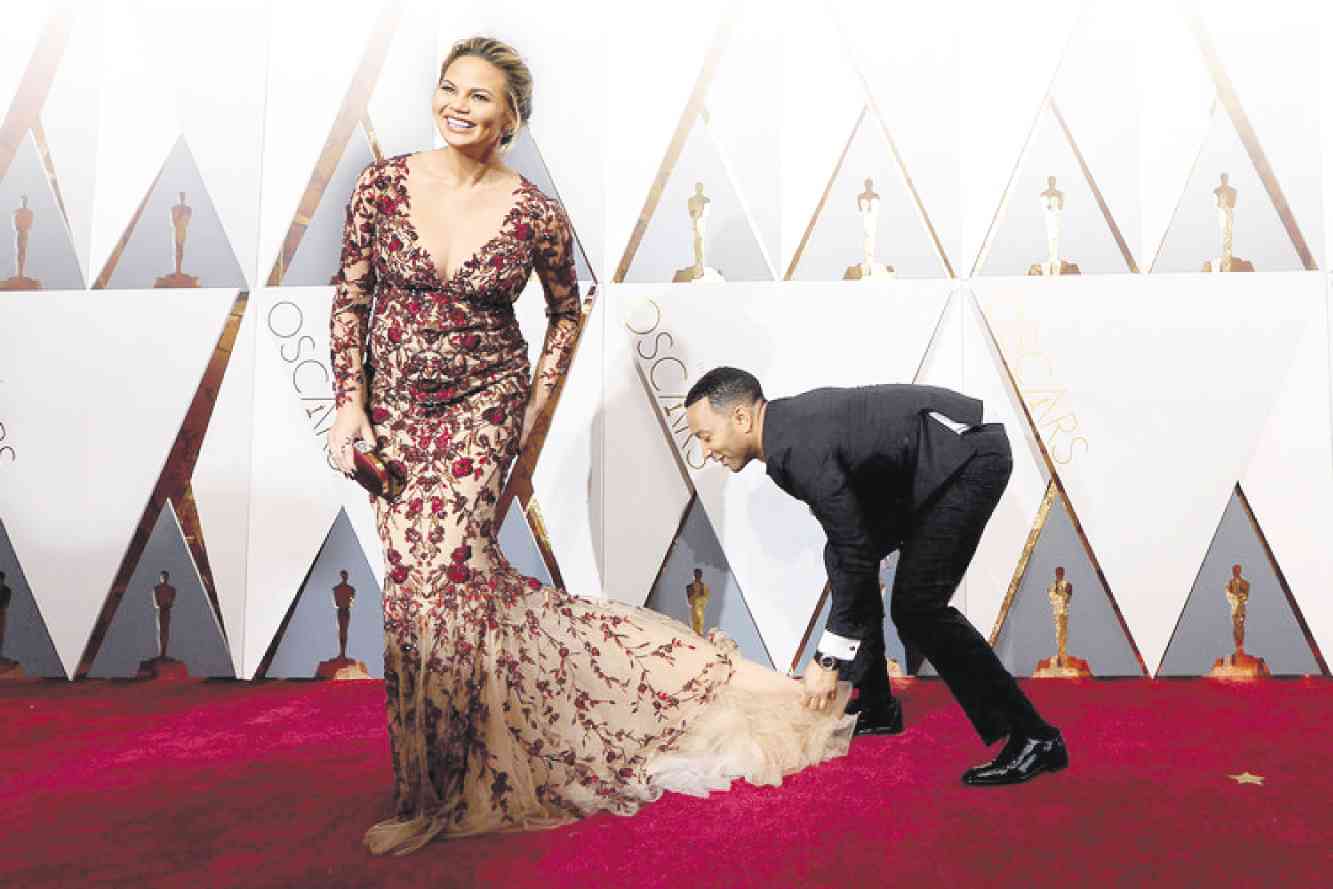 Are you ready to become a daddy?

Is it true you went shopping for baby stuff with Kanye West?

Yes, that is true.

What advice did you get from Kanye?

It was really about Kim (Kardashian) and Chrissy. Kim was going through the store showing Chrissy all the things she would need and how she uses them.

You and Chrissy saw each other’s career rise.

We’ve grown together.  I was a little more famous than her at the beginning, but we support and complement each other well.

One of the memorable red carpet photos in the recent Oscars was of you bent down and fixing the train of Chrissy’s gown to make it look good for photographers.

I knew I would possibly be on train duty for the Oscars because the dress had a mind of its own (laughs), so I tried to be as helpful as possible.

Channing Tatum does that as well to his wife Jenna Dewan on the red carpet.

Yes, but I feel like we shouldn’t get credit for this. This is what husbands are supposed to do (laughs).

Your wife is a good cook. How have you not put on weight, especially when she was writing and coming up with the recipes in her book, “Cravings: Recipes for All the Food You Want to Eat”?

What made you fall in love with Chrissy?

I don’t know if there was any one thing, but you start to feel a certain chemistry with someone you know is more special than what you’ve felt before. I had never felt that before.

I would take credit for its cleverness, but I didn’t write it. I was going to “Jimmy Kimmel Live!” to promote our show, “Underground.” Jimmy’s folks said, “We had the ending of ‘Downton Abbey’ yesterday and we wrote a song. We were wondering if you would sing it.”

Have you seen and heard Jamie Foxx’s impersonation of you?

He’s been doing that to me for a long time. When I run into him, he’ll sing one of my songs to me in my voice. He’s very good at it.

Can you talk about how “All of Me” has become a pop classic?

In the creative process, you never know if you’re going to come up with a kind of song that transcends culture.

I’m grateful to all the fans who tell me they’ve played it at their weddings and when they proposed to their significant others.

Can you talk about your journey and drive to make it in the music business?

I moved to New York in 2000. I graduated from University of Pennsylvania in 1999. The first time I ever played on a major album was in 1998, while I was still in school. I always knew that I wanted to pursue a career in music. I wanted to do it as a solo artist, so I started recording my first demos right around that time.

I was trying to get a record deal even as I was graduating. I moved to New York in pursuit of that. I had a day job, but at night, I’d go to the studio and work on my demo and perform live shows.

What was your day job at that time?

I was a management consultant at a place called Boston Consulting Group. I graduated from a good school with good grades.

How did you meet Kanye West along the way as he was also starting his career?

In 2001, Kanye himself had just moved to New York from Chicago. Kanye’s cousin, Devon, was my roommate in college and in New York, as well. Devon thought Kanye and I should meet. [Then] we started making songs together for my and for Kanye’s demo.

How did you go from the name John Roger Stephens to John Legend?

In that process with Kanye, I met one of his friends, a poet from Chicago named J. Ivy. He was the first guy who started calling me John Legend. It was just a nickname among our group of friends. Eventually, I decided to take it on as a stage name.

What was your dream when you were growing up in Ohio?

I wanted to be a musician. I’ve been playing the piano since I was 4. I’ve been singing in church and in school since I was 6, 7 years old. I loved being onstage.

As a producer, do you want to concentrate on African-American history?

It’s not the only thing we focus on, but it’s something I studied in school, so I’m very familiar with it.

How difficult was it to get “Underground” made?

Some people shy away from it, but it’s been done beautifully on television as well as on film.

How far back have you traced your family’s roots?

It’s interesting because there’s a show called “Finding Your Roots with Henry Louis Gates Jr.” He invited me to be on the show a few years ago. We found out there were interesting stories about the slaves in my ancestry.

Some of my ancestors were taken back into slavery from freedom. They were living in Ohio and had been freed by their master upon his death.

In this US presidential election season, the level of apparent race bigotry rearing its ugly head is alarming.

I’ve been dismayed to see the level of hate and bigotry that’s been spewed from people who are in a position to run for President and are leading in a major party in the presidential race.

Do you think that much of the hatred and opposition toward President Barack Obama over the years is racially based?

Some of it is. A lot of it is ideological.

What did you take away from the case where another composer accused you of plagiarism? (Anthony Stokes claimed that John’s “Maxine’s Interlude” was based on his song, “Where Are You Now?”)

I won’t comment on my case because I got in trouble last time I did because we had a settlement.

What’s the next best thing for you?

The next big thing obviously is being a father.

But musically, which direction are you heading?

It is pretty cool to be John Legend these days.