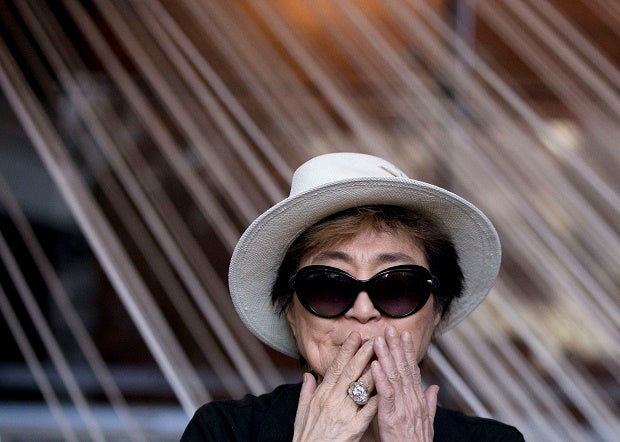 In this Tuesday, Feb. 2, 2016 photo, Yoko Ono blows a kiss as she poses for photographers in front of a work entitled, “Morning Beams/River Bed,” at a press event to mark the opening of her exhibition, “Land of Hope” at the Museum of Memory and Tolerance in Mexico City. Bringing an anti-violence message to Mexico City, the 82-year-old Ono said, “I have come here to bring world peace.” AP

NEW YORK, United States — Yoko Ono’s son says his mother has been released from a New York City hospital after being treated for flu-like symptoms.

Sean Ono Lennon said on Twitter Saturday afternoon that his mother was home and “running around as usual.”

The 83-year-old artist-singer is the widow of John Lennon of the Beatles. She spent the night at Mount Sinai West Hospital in Manhattan. Her representative told The Associated Press that Ono went to the hospital Friday night on the advice of her doctor.

At 83, Yoko Ono says she didn’t break up Beatles
Yoko Ono comes home: Up close and personal for a few minutes