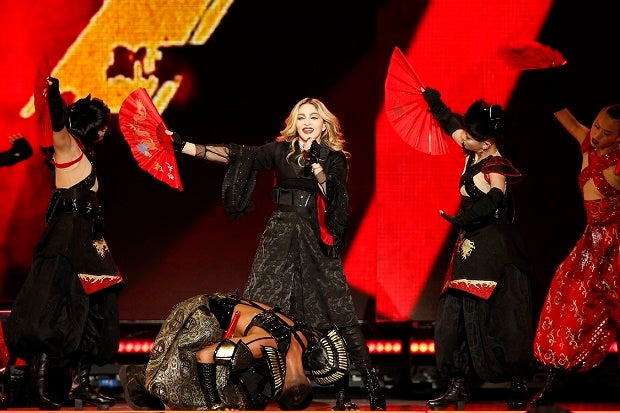 Seven months after its official announcement, the two-night Manila stop of Madonna’s “Rebel Heart” world tour will finally kick off tonight, Feb. 24, at the SM Mall of Asia Arena.

Thousands of her Filipino fans are expected to gather and witness the music icon perform live in this part of the world for the first time in her illustrious, and at times controversial, 37-year career.

The concert series, mounted in support of Madonna’s 13th and latest studio album of the same title, will be a visual feast, replete with intricate stage designs and fabulous costumes, which will match each of the show’s four acts: “Joan of Arc,” “Rockabilly Meets Tokyo,” “Latin Quarter” and “Party.”

READ: Madonna in Manila: Audience to get their money’s worth

But more than the production, the trendsetting and ever-evolving artist will likewise dish out a 20-song repertoire that includes past chart-toppers and recent favorites like “Ghosttown” and “Like a Virgin,” as well as a few surprises.

The Asian leg of the tour, for instance, has Madonna regaling diehard supporters with a rare treat—a live performance of “Take a Bow,” the ballad from the 1994 album “Bedtime Stories,” which, prior to the “Rebel Heart” era, had been sung onstage by the 57-year-old pop superstar only about three times, and all back in 1995.

“The Rebel Heart Tour” began in Montreal, Canada in September last year, before making the rounds in the rest of North America, Europe, and, now, in Asia, where the American singer-songwriter has never toured in extensively. Her previous shows in Asia had been almost exclusively held in Japan.

A second show will be held tomorrow night, also at the same venue. (Call SM Tickets at 4702222) CDG