All white on the big night: Oscars diversity row returns 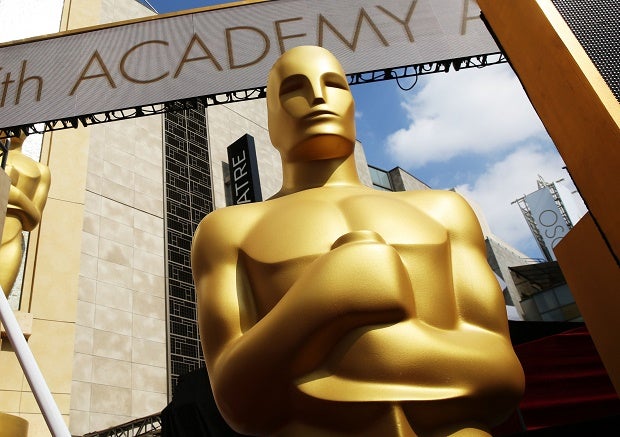 In this Feb. 21, 2015 file photo, an Oscar statue appears outside the Dolby Theatre for the 87th Academy Awards in Los Angeles. The largest black audience for the Academy Awards over the last dozen years came in 2005, when Chris Rock was host and Jamie Foxx and Morgan Freeman won the top male acting awards. Rock will be back as host this year, but it’s an open question how many African American viewers will be tuning in. A lack of diversity in Oscar nominations have led to stars like Spike Lee and Jada Pinkett Smith calling for a boycott of the Academy Awards, scheduled for Feb. 28. AP

LOS ANGELES, United States — Diversity is the big word on everyone’s lips again as Hollywood’s movers and shakers gather for the Oscars, with an overwhelming bias toward white nominees threatening to overshadow the glitzy event.

No ethnic minority actor or actress has been nominated in any of the top categories for the second year running, sparking an outcry against the Academy of Motion Picture Arts and Sciences.

READ: Calls for boycott of Oscars grow over diversity of nominees | Redford refuses to be drawn into Oscars controversy

Darnell Hunt, who heads the Ralph J. Bunche Center for African American Studies at the University of California, Los Angeles, describes the controversy — the subject of a social media campaign under the hashtag #OscarsSoWhite — as “business as usual.”

“Hollywood is a very insular industry. It’s dominated by white men. It’s always been that way. They tend to surround themselves with people with whom they feel comfortable,” Hunt, who co-writes an annual report on Hollywood diversity, told AFP.

“They tend to look like themselves — other white men, for the most part that they’ve worked with before — and that basic practice reproduces the structure of the industry that we’ve seen for generations.”

Hunt’s 2015 study found that ethnic minorities, who constitute almost 40 percent of the US population, remain under-represented on every front, from leading acting roles and directing to writing and reality television.

The problem is almost as extensive among women, said the report, which surveyed the top 200 theatrical film releases in 2012 and 2013 and all broadcast, cable and digital platform television programs from the 2012-13 season.

Hunt says Hollywood may even be “leaving money on the table” since films with relatively diverse casts enjoy the highest global box office receipts and the highest return on investment.

The Academy’s board, smarting from claims of institutional racism, has announced that by 2020 it will double the number of women and people from minority backgrounds among its voting members, which it currently puts at 24 percent and seven percent respectively.

All eyes will be on black comedian and actor Chris Rock, who is still on board to host the Oscars on February 28, despite calls for him to join a boycott.

Insiders say the 51-year-old will not shy away from the controversy, and reworked his entire set after Jada Pinkett Smith announced she would be staying away.

“At the Oscars… people of color are always welcomed to give out awards… even entertain,” Pinkett Smith, 44, tweeted.

“But we are rarely recognized for our artistic accomplishments. Should people of color refrain from participating all together?”

With the awards season in full swing, many other Hollywood luminaries have spoken out on the issue, with earnest calls for reform by largely white movie actors and directors picking up prizes.

“I think what it comes down to for me is accountability, personal accountability,” “Spotlight” director Tom McCarthy told reporters at a recent Oscar nominees luncheon in Los Angeles.

“I think it raises the big question: what can we all do? Everyone has to take part — every writer, director, actor, producer, theatergoer.”

– ‘Institutional apartheid’ -Oscar nominee Sylvester Stallone revealed at the same event that he had toyed with boycotting the Oscars after discovering none of the African Americans involved in his film, “Creed,” had been given a nod.

“Mad Max” director George Miller welcomed that the debate was finally being had but added that casting was “story-driven.”

American filmmaker Joshua Oppenheimer’s Oscar-nominated “The Look of Silence,” a documentary about the mid-1960s purge of communists in Indonesia, will see its Bahasa-speaking protagonist take his place among a sea of white faces at the Academy Awards.

“I think the lack of diversity in Hollywood is a symptom of much deeper, painful institutional and economic apartheid across the country,” Oppenheimer told AFP.

The Multi-Ethnic Media Coalition, a pressure group which has met annually with the top four television networks since 2000, said in a statement it was beginning to engage with Hollywood’s biggest film studios on diversity.

“We’ve broken barriers in television and we’ll do it again with film,” said Alex Nogales, of the National Hispanic Media Coalition, part of the umbrella group.

“Studios need to know that representation matters for recognition of hard work and talent, for combating negative stereotypes in our public discourse and for the next generation of our future leaders in the film industry.”