Redford refuses to be drawn into Oscars controversy 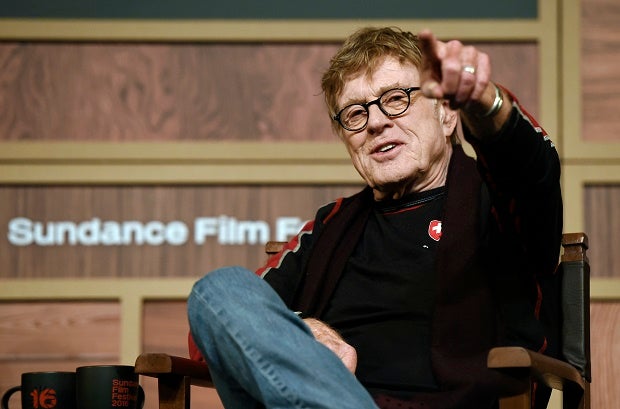 Robert Redford, founder and president of the Sundance Institute, calls on a reporter during the 2016 Sundance Film Festival Opening Day Press Conference at the Egyptian Theatre on Thursday, Jan. 21, 2016, in Park City, Utah. Invision/AP

PARK CITY, United States—US actor Robert Redford refused to be drawn into the Oscars race controversy Thursday as the Sundance Film Festival he founded got underway in the mountains of Utah.

“I am not into Oscars, I am not into that,” Redford told reporters as he kicked off the annual gathering, a showcase for independent films, in the ski resort of Park City.

“For me it’s about the work,” he said. “Whatever comes from it, whatever rewards come from it, that’s great but I don’t think about it.”

Still, the festival opened amid a storm of controversy in Hollywood over the lack of black actors nominated for the Oscars for the second year in a row.

Filmmaker Spike Lee and actor Will Smith, as well as his wife Jada Pinkett Smith, have said they would not attend the Academy Awards on February 28 over the lack of diversity.

Asked repeatedly by reporters about his opinion on the matter, Redford clearly did not want to tackle the topic head on.

“Diversity comes out of the word independence,” he said. “It’s a word I operate from principally for most of my life.

“Diversity comes out of it, it’s an automatic thing.”

He added that he was not against mainstream cinema and his goal in creating the Sundance festival in 1985 was more to give a voice to independent filmmakers rather “than insurgents coming down from a mountain to attack the mainstream.”

The festival, which runs through January 31, will shine the spotlight on some 120 independent features, many by independent newcomers trying to make their mark.

This year’s lineup offers an array of films and documentaries that deal with timely issues such as US gun violence and abortion.

Read Next
Carla Abellana: Be effortlessly beautiful with Vita-E
EDITORS' PICK
Beyond the Chocolate Hills: A farm-to-table, heritage culinary adventure of Bohol
Metro Manila logged most number of new COVID-19 cases — OCTA Research
WHO says monkeypox is not yet a health emergency
A massive highway complex makes living in the South highly attractive
Guarding Sara: Why next VP is getting own security team
House energy committee chair Arroyo bats for cheap electricity
MOST READ
Leon Barretto steps up for sisters, asks dad Dennis Padilla: ‘Please stop resorting to public shaming’
LOOK: Rita Daniela pregnant with first child
Marjorie Barretto to speak up on Dennis Padilla, kids’ relationship ‘in time’
Guarding Sara: Why next VP is getting own security team
Don't miss out on the latest news and information.