Ryan Reynolds on his Valentine’s Day plans and Deadpool suit 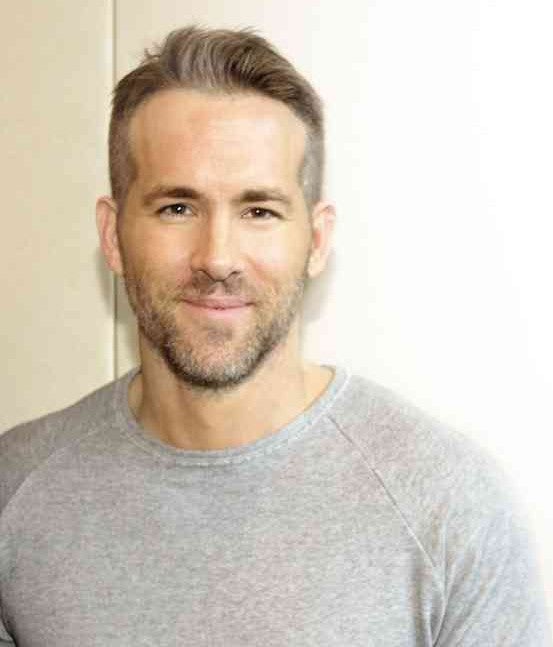 Ryan embodied the character and the movie itself—he was raunchy, irreverent and a lot of fun.

The film is everything we expected director Tim Miller’s adaptation to be and a lot more.

Asked if he can see when he wore the Deadpool mask, Ryan replied, “And how do I go to the bathroom? I’ll answer both questions. To pee, it took me about 30 minutes to find my penis, so it was no joke. Russ Shankles, the genius who made that suit, didn’t really think of that. I let him know it in no uncertain terms.

“Russ actually just e-mailed me a week ago. He wrote, ‘What can we do to [the suit], assuming we are going to make another ‘Deadpool’ movie? What adjustments? Can you send me a list of adjustments on the suit you like made?’

“The first and only thing I wrote, ‘I have 10 adjustments that I want you to make.’ And all 10 I listed were about allowing me to pee faster.”

Picking up the Deadpool mask he brought to the chat, Ryan explained, pointing at the ovals over the eyes, “This is all opaque, and you can’t see out of any of that stuff. But for stunts, both of these black pieces come out, and they are actually see-through. So we had stunt eyes—hero eyes is what we called them. These are the hero eyes. I can see straight ahead.

“But then, in big action sequences, I would wear the ones that were slightly meshed, so they weren’t good for close-up. But there are actually some close-ups in the movie with those eyes on, but you can’t really tell. So I would see much better.”

On whether he has slept in the red and black suit with Blake, Ryan at first mock protested, “That is absolutely inappropriate!” Then, with a laugh, he quipped, “And the answer is yes. She loves it! I can’t even make love unless I am in the suit now. Where do you think our daughter came from?”

Teased that Morena is pregnant, Ryan, with a grin, was quick on the draw: “Yeah. So what are you saying? The dates don’t match up!” Morena is due to give birth to her second child (whose father is her “Gotham” TV series costar, Benjamin McKenzie), in the next few weeks.

Given how long it took for him to get his dream project on the screen (he began championing the movie in 2004), Ryan keeps one Deadpool suit at home as a priceless memento. “We had nine suits total. We trashed seven of them (while filming) for the movie. Two remain—one I left on the set and [another] at home. I told them that I waited 10 years to shoot this movie. If they want the suit (at home), they can come try and f***ing get it from me.”

Toward the end of the hilarious movie (spoiler alert), Deadpool uncovers his face to Morena’s Vanessa, only to reveal that he’s wearing a Hugh Jackman mask.

“Hugh was such a great sport about it,” Ryan said. “Of course, I made the phone call. I said, ‘Hugh, how would you feel if I maybe or maybe not stapled your face with mine?’ And he seemed to be just fine with that. He has been great about it (end of spoiler alert).

“There were some viral ‘Deadpool’ videos of me doing a Hugh Jackman accent as the ‘Sexiest Man Alive’ in the full scar makeup,” shared the dude who himself was declared the “Sexiest Dad Alive” in People magazine’s recent issue (he was “Sexiest Man Alive” in 2010). “Hugh liked it so much he put it on his Twitter. He is a pretty big supporter of it.”

Chuckling, he said, “Mostly, I was sending those to his wife, but he somehow got hold of them.

“Who doesn’t want to be Hugh Jackman? He was chiseled out of one piece of mahogany. Hugh is a very good friend of mine. I love Hugh. I would do anything for him. He was such a good sport about the Wolverine-Deadpool rivalry because in the comics, the two go at it all the time.”

On “Deadpool” generating enthusiasm even from people who have shied away from movie theaters, the Vancouver native commented, “What has been really fun is from the very beginning, before we even got on film to shoot our movie, we shot viral videos. We shot one where I murder Mario Lopez from ‘Extra.’

“And we shot one with little kids on Halloween. We shot all these things. And they started getting 20 to 50 million views on the Internet. So they did such an amazing job of nurturing Deadpool to go from slightly obscure Marvel comic character to cultural phenomenon.”

Laughing, he added, “I have not stopped playing Deadpool since I wrapped on the set eight months ago. I have the suit in my house because we are always sitting around thinking, oh, this would be a good video—let’s shoot this! I would shoot stuff, sometimes with my iPhone.”

While the film is R-rated—true to Deadpool’s raw spirit—many teens want to see the atypical superhero movie. “Kids these days—they see everything,” Ryan remarked. “They are on the Internet. Eleven-year-olds know what zebras look like mating.

“The movie looks like it’s in the big scope of ‘The Avengers’ but we really didn’t shoot it for that much money. So, it’s a lot smaller.” 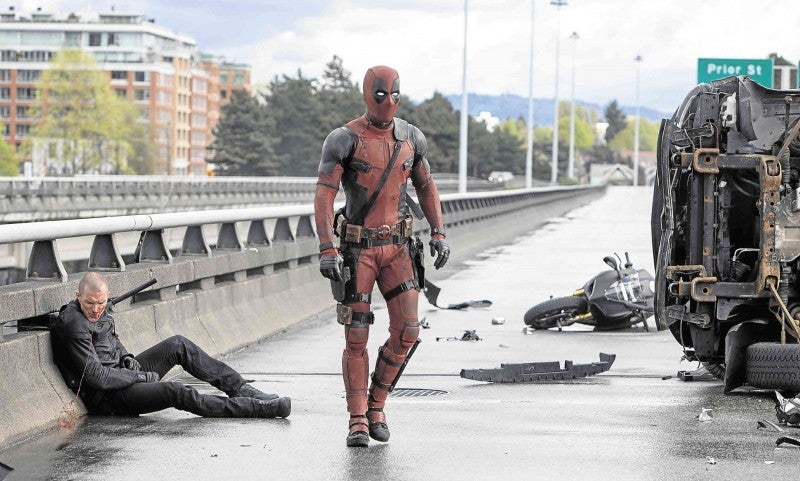 ED SKREIN (left) and Reynolds costar as violent archenemies in the new film.

He deadpanned, “Looking at you, Wolverine.”

The father of James (named after Ryan’s late dad), his daughter, born in December 2014, with Blakely, admitted that he’s no longer as derring-do with doing stunts. “I am 39 now, so falling on cement isn’t hilarious anymore,” he confessed.

“It hurts. So, mostly, I just did functional stuff (in the movie). I just worked out harder than I ever worked out in my life to just not get hurt. We didn’t have the budget to shut down. If I got hurt, we are screwed.

“I had this fantastic stunt guy from  Ukraine who was in the Cirque du Soleil. We used him in things that were physically impossible for me to do.

“The problem is his damn head was a completely different shape than mine. As we started shooting, we realized that all the fight work is character work, too. So you can’t just have a stunt guy.

“I ended up doing way more things than I was A, ready for, and B, my wife was ready for (laughs). We got about four pretty brutal injuries in the movie, but not anything that made us stop completely.”

On “Deadpool,” which is obviously ultraviolent, sexy and features foul-mouthed characters, being banned in China, Ryan said, “They wanted to edit the movie down so Chinese audiences would be able to see the movie.” He joked, “But we tried that and the movie was 14 seconds. So we can’t do that!”