Survival of the fittest–and sneakiest 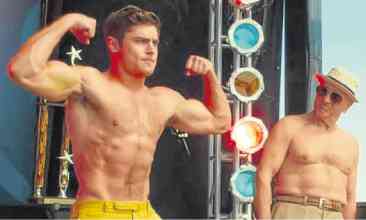 It’s irreverent, immature and, well, sexy: Efron and his body double get in different stages of undress, and Aubrey Plaza surprises as a lustful and scantily clad character—it sure has its share of eye candy to complement the rather simplistic, odd-couple buddy plot.

There are dumb, needlessly lengthy jokes about genitalia and bodily functions. Still, there are some genuinely hilarious gags. De Niro is cozy as the sneaky, potty-mouthed ex-soldier Richard/Dick, who uses his fuddy-duddy lawyer grandson Jason (Efron) as his wingman.

Shortly after meeting a trio of friends—the hippie photographer Shadia (Zoey Deutch), the openly gay Bradley (Jeffrey Bowyer-Chapman) and the vacuous nymphet Lenore (Plaza)—they go on dizzying, booze- and drug-enhanced parties, where the elderly man is easily the coolest and most fun guy!

Chloe Grace Moretz is credible as a young action heroine, having played the violent vigilante Hit-Girl in two “Kick-Ass” films—so, casting her as the gun-toting, if vulnerable young renegade Cassie in “The 5th Wave” makes a lot of sense.

However, the sci-fi-adventure is a mishmash of recent youth-power flicks—“The Hunger Games,” “Maze Runner” and “Divergent”—and fantasy mush-fest “Twilight.” This time, though, the villains are aliens dubbed The Others, creatures that body-snatch and control adult humans.

It starts fantastically enough, as the alien invasion happens in waves, the visuals reminiscent of the better-crafted disaster movies of recent years.

But it quickly devolves into another film about youngsters forced to turn savage. Despite being utterly formulaic, though, the film by J Blakeson has things working for it. Moretz is watchable as a stealthy, guilt-ridden survivor.

The film ends cleanly and safely, though, nearly devoid of true and lasting danger, and with little mythology for the viewer to care about.