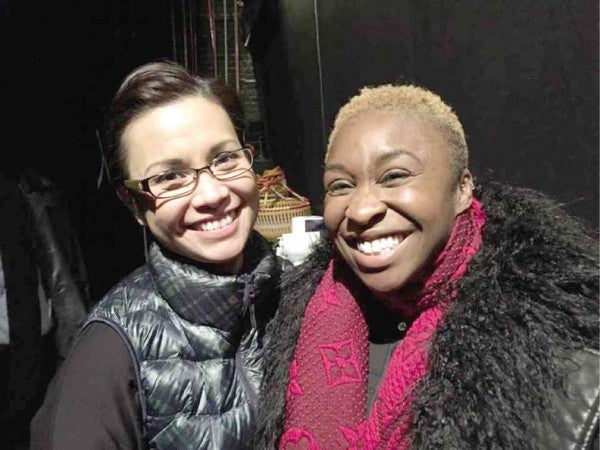 THE AUTHOR (left) with the musical’s star Cynthia Erivo

NEW YORK—I saw this show last week, and I’m still feeling all the feels (that’s what youngsters say these days, isn’t it?).

This isn’t the first time this musical, based on the novel by Alice Walker, has seen the light of day on Broadway. A larger, grander production played at the Broadway Theater from 2005 to 2008, and was nominated for a slew of Tony Awards (leading lady LaChanze won a Tony Award for best actress in a musical in 2006 for her portrayal of Celie).

A brand-new revival has opened this season on Broadway, coming from the Menier Chocolate Factory in London.

This production, with direction and musical staging by John Doyle (he also directed the acclaimed revivals of “Sweeney Todd” starring Michael Cerveris and Patti LuPone, and “Company” starring Raul Esparza), is stripped down and simple, the set comprised of chairs hanging on three walls onstage.

The task of setting time and place is solely on the cast, moving chairs, sheets, baskets and other props. And they do, without the audience losing the suspension of disbelief.

Perhaps the most illustrious cast member is Hudson, thanks to her star-making turn as Effie White in the film adaptation of “Dreamgirls.” However, her performance here, as great as it is, is not ultimately what will move you to tears.

That distinction belongs to Erivo, whose physical transformation as Celie—starting as a 14-year-old girl raped by her stepfather and pregnant for the second time, to a 54-year-old woman that has found a deep love for herself for who she is (she discovers her own sexual orientation in the story, falling in love with Shug), with her head held high and her shoulders back—is so inspiringly complete.

When she finally sings “I’m Here,” the audience is compelled to stand for her, crying and cheering, as if the Holy Spirit has moved through you.

Brooks’ Sofia is sassy and brave, able to stand up for herself and speak her mind. And her performance doesn’t fail to make the crowd laugh and cheer for her. Hudson is sexy as Shug, and of course her pipes don’t fail to impress.

The rest of the featured cast—Isaiah Johnson as Mister, Kyle Scatliffe as Harpo and Joaquina Kalukango as Nettie—are strong actors and singers. You believe every single thing that’s happening.

My scene-stealer awards also go to Patrice Covington as Squeak, and the three church ladies, Carrie Compere, Bre Jackson and Rema Webb (I mean, when one eyebrow of theirs is raised, we see nothing else).

The show felt less like a musical and more like a play whose dialogue happened to be sung. There’s no demarcation line between the songs and the script, one thing seamlessly dovetailing into the next.

All the actors are skilled at turning each of their sung monologues into miniplays, and although it is obvious that their pipes are out of this world, it never seems like showing them off is the intent.

It’s about telling this beautiful and inspiring story. And ultimately, that’s the hallmark of any successful night at the theater.

I’ve always been a believer in this: When you have a good company of actors acting as one, united with the intention of telling their story, that’s when it becomes a moving experience. When there’s showboating, showing off and solo flying, that’s when we see the fractures in the structure.

I have seen multiple productions of different shows that I love, curious to see how each one holds up. The result is the same: When the cast works united, it’s a beautiful, almost church-like experience.

But when the company doesn’t, the production feels tired, and I end up muttering to myself about those few hours I’ll never get back.

To the cast and creative team of “The Color Purple,” thank you for bringing this religious experience back to Broadway, moving audience members with every single performance.

You haven’t only mounted a beautiful show, but you’re moving and inspiring the spirits of the people who come to see this amazing show. Be proud, all of you.

My own personal hope is that a production of “The Color Purple” makes it to Manila. Our own people will be able to relate to this story of triumph over adversity—and be moved by the spirit dwelling within it!

On behalf of the entire Salonga family, thank you to everyone who has sent messages of condolences, comfort and prayers following the passing of my father, Feliciano G. Salonga, former chair of the Subic Bay Metropolitan Authority. We all truly appreciate your well wishes.