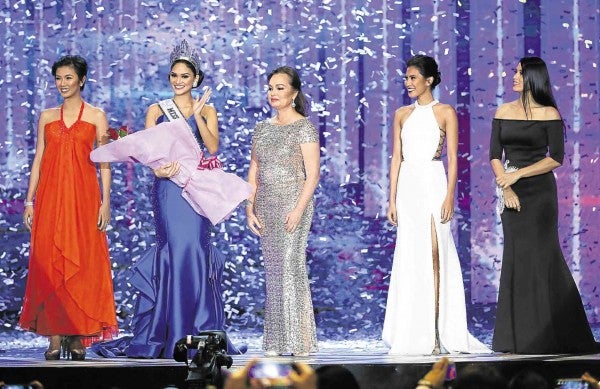 When Pia Alonzo Wurtzbach walked on the Miss Universe stage at the Axis Theater of Planet Hollywood in Las Vegas on Dec. 21, loud cheers erupted because of the huge Filipino delegation at the venue.

But things were very different back when Margie Moran bagged the title in Greece in 1973—or 42 years before Pia’s triumph in the global tilt.

“There were only three Filipinos, wala pang OFW (overseas Filipino workers),” Margie told the audience when she took the stage on Thursday’s homecoming show mounted for Pia at the Smart Araneta Coliseum.

“And the Filipinos who were there were from the embassy,” she added. “But I was still the crowd favorite. I was even Miss Photogenic, so I was also the favorite of the press… I felt like a Greek goddess.”

The world (or the universe, rather) of differences was further highlighted by the remarks made by former Binibining Pilipinas-Universe titleholders who shared their experiences while competing abroad.

“When Filipinos throw their support, it’s something else,” said actress Bianca Manalo, who represented the Philippines in the 2009 Miss Universe pageant in the Bahamas.

“Two thousand Filipinos came to the parade to cheer; you’d think all of them were living there,” she continued.

Gionna Cabrera, Miss Photogenic in the 2005 Miss Universe pageant in Thailand, said: “I definitely had huge support. During my time in Bangkok, different groups from all over the Philippines came. I was very well-supported.”

Even 1999 Miss Universe first runner-up Miriam Quiambao attested to the massive amount of support Filipino beauty queens have been receiving from their compatriots.

“We appreciate all the supporters, the mentors, designers, stylists and assistants,” she told the audience. “Thank you to the Filipinos who supported and prayed. You are the reason why we are here, and why the Philippines is now known as a genuine powerhouse in the beauty pageant industry.”

The woman of the hour also attested to the importance of massive Pinoy support for the country’s bets in beauty tilts, taking the opportunity to thank her “Pianatics.”

“Thank you to everyone who voted in the global fan vote. Pianatics, thank you very much. Because of you, I was No. 1 in swimsuit, in evening gown and in the question-and-answer,” she continued. 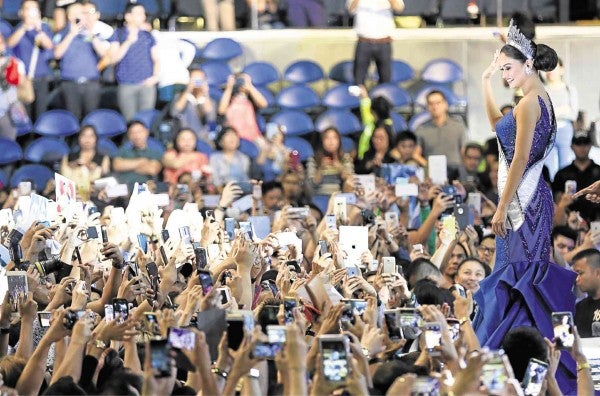 “When I was walking in my gown, wearing my sash, the feeling I had then was the same now. It was like I was in the Philippines. I was proud to be a Filipino at that moment,” said Pia, the third Filipino to win the Miss Universe pageant.

A special segment of the show allowed her to do the victory walk that was “taken away” from her as a consequence of the major gaffe that pageant host Steve Harvey committed when he announced the wrong winner.

Resplendent in her now-famous royal blue Albert Andrada gown, Pia sashayed onto the stage with her Miss Universe crown and sash.

The presentation also showcased some of the Bb. Pilipinas winners who represented the Philippines in the Miss Universe pageant.