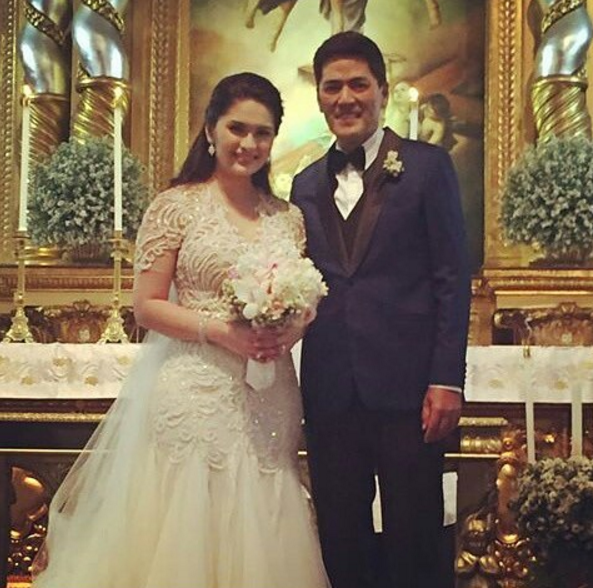 It was a relationship described by the couple as “difficult,” and one considered controversial by not a few local show biz observers.

“This is it… . We’re committing to each other,” Sotto said in a prewedding interview on “Eat Bulaga,” which had the exclusive rights to cover the event. “I found in Pauleen a kind heart. She’s a kind daughter to her parents, a kind friend and now, a kind wife.”

The church, where Sotto is a parishioner, can accommodate some 250 guests, and was adorned with white flowers—orchids, tulips, carnations, peonies, according to wedding planner Rita Neri, who had worked closely with Luna for the past six months.

Sotto and Luna, who confirmed their engagement in September 2015, donned creations by designer Francis Libiran. “I’m in love with my dress,” said the bride, whose parents, Eugenio and Chat, were by her side.

The resplendent bride walked down the aisle as the groom’s niece, Ciara Sotto, sang “When I Fall in Love.”

Typically reserved, Sotto was noticeably more emotional in his most recent television appearance, at times getting choked up and misty-eyed when talking about Luna. He had been trying not to think about the wedding too much, he confessed. But things began to sink in when he woke up the morning of the big day.

“It’s surreal,” Sotto said, whose romance with Luna started and blossomed on “Eat Bulaga!” Addressing his bride, he said, “Thank you for loving me for who I am and what I am. I really appreciate that.”

He added: “My gift to her is the promise of forever.”

Luna, on the other hand, was admittedly nervous, especially since she was very hands-on with the wedding preparations. “We have been praying for this for quite a while. We went through a lot. I just feel blessed that I’m sharing this life with him,” said the actress, who said she “couldn’t wait to be [Sotto’s] wife.”

The reception was held at the nearby Filinvest Tent, with Bizu as caterer.

The wedding capped a relationship mired in incessant and nasty intrigues, mostly stemming from the couple’s age gap. Some bashers even accused Luna of being a gold digger. Some of Sotto’s children, many of them older than Luna, expressed initial misgivings about the May-December romance.

In those trying times, it was Rodriguez who became one of Luna’s shoulders to cry on. “There’s no such thing as an easy relationship. I always gave Pauleen advice,” the TV host told the Inquirer. “But I’m so proud [Vic and Pauleen] were able to weather the storm and stick it out.”

She added: “Vic is a big star. He has box-office movies, big endorsements—everything he needed. But now that he’s with the perfect woman he will spend the rest of his life with, he’s now complete.”

“Vic has spent much of his life making other people happy. He deserves to have someone who will make him happy,” Seguerra said.

Wurtzbach, one of Luna’s closest friends and a fellow member of Star Magic Batch 11, said the bride “deserves all [this] happiness.”  She added: “Everything fell into place at the right time. God is good. I’m happy to see her happily-ever-after moment.”

In a previous interview, also on the long-running noontime program, Sotto turned emotional as he thanked his children for eventually giving him their blessing. “Thank you for all the support. I know it wasn’t easy to accept our decision, but I know that you love me and that you respect me,” he said.

Luna was just as touched. “I want to thank everyone for this entire journey. I want to thank God, who gave me strength, humility and selflessness. Now I know God loves me.”

Among well-wishers, a piece of advice frequently came up: “Always put God at the center of your relationship.”

Manalo, dressed as Lola Tinidora of “Kalyeserye,” said on “Eat Bulaga!”: “You’ve been through a lot, and you’ve fought your way through. There will be more hurdles, but always trust in God.”

The newlyweds will honeymoon in the Maldives, and expect to move into their new house in Laguna province after a month.

Do they plan to have a baby immediately? “I hope so,” Luna said on “Eat Bulaga.” But she won’t be quitting show biz, and would merely stop from doing taxing soap operas, she added.

Sotto, in a previous interview with the Inquirer, said the baby will come “in God’s time.”

“We’ll just wait. If we get blessed, then we’ll be thankful,” said Sotto, whose previous short-term affairs with other women had convinced some folk that he would never settle down.

“I just found the right woman at the right time … . Tamang panahon lang (It was just perfect timing),” he explained.

Pauleen Luna: What Vic and I have is true love