Joseph Fiennes on his Michael Jackson casting, other roles 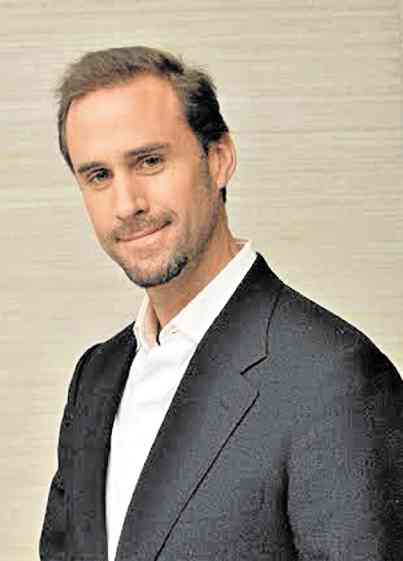 LOS ANGELES—Amid the diversity issue rocking the Oscars and Hollywood, news of Joseph Fiennes playing Michael Jackson in a TV movie, “Elizabeth, Michael and Marlon,” is also stirring controversy. Now in postproduction, the comedy depicts the disputed story that Elizabeth Taylor, Michael and Marlon Brando—unable to fly out of New York because of the 9/11 attacks—got in a car and drove to Los Angeles.

Someone close to Elizabeth (who is played by Stockard Channing) reportedly denied that the actress went on that road trip. But what’s making a bigger splash is that a white actor like Joseph is portraying the late African-American icon.

The British actor, who’s the younger brother of Ralph Fiennes, played down the controversy in his published comments as he described the half-hour TV film as “off the wall.”

“I’m a white, middle-class guy from London,” Joseph was quoted as saying. “I’m as shocked as you may be… [Jackson] definitely had an issue—a pigmentation issue—and that’s something I do believe. He was probably closer to my color than his original color.”

In the meantime, Joseph stars in “Risen,” which is being described as the unofficial sequel to Mel Gibson’s “The Passion of the Christ.” The movie’s editor is Steve Mirkovich, who also edited “The Passion.” Cliff Curtis portrays Yeshua (Jesus).

Kevin Reynolds directed “Risen,” which tells the story of a nonbeliever, Clavius (Joseph), a powerful Roman military tribune, and his aide Lucius (Tom Felton, Draco Malfoy in the “Harry Potter” series), who were assigned to solve the mystery of what happened to Jesus following his crucifixion to disprove rumors of a risen Messiah and quell an uprising in Jerusalem.

“For me, the big takeaway and what I feel Kevin Reynolds, our wonderful director, has served up here, is witnessing where ‘The Passion of the Christ’ left off,” said Joseph, whom we interviewed before the “Elizabeth” controversy broke out.

“It’s about the crucifixion, resurrection and ascension, but through the eyes of a nonbeliever, someone who’s so diametrically opposed in terms of the religion and ethics of Christianity,” explained the actor who is best known for the film “Shakespeare in Love.”

“I love that we visit a story through that angle,” he added. “For me, it doesn’t have to be a religious film. The producers have worked hard and diligently to assure that there was respect of the scripture.

“It’s this wonderful balance between serving up a biblical narrative, but with a great, cinematic creative form. So, it’s dovetailing those two together. We have that balance right.”

The 45-year-old stressed the “mystery” aspect of “Risen,” playing up its appeal as opposed to conventional “biblical epics.”

“I love the dynamic and thread—a body goes missing, and they think that it’s a hoax and that the supporters of Christ have taken his body in order to promote their cause,” he remarked. “They need to be put down immediately. For the first part of the film, it’s less of a Bible movie and more of a great detective film about what happened to the body—and it becomes a murder mystery!

“Then, it turns into a theological murder mystery. There are many strands and takeaways. You don’t have to be of a Christian persuasion to enjoy the movie.”

The actor also emphasized the story’s universal themes. “The big thing here is the theme of redemption. You don’t have to be religious to understand the power of redemption and forgiveness—that’s something I love about Clavius’ journey. He was part of the death squad that oversaw this particular crucifixion. Then, he gets a second chance!

Joseph, Ralph and their four siblings were raised by parents, photographer Mark Fiennes and novelist, Jennifer Lash, who had different faiths. “My mother was Catholic and my father was Protestant, so there was religion from the get-go,” recalled the youngest of the Fiennes brood.

While he said he was baptized a Catholic, Joseph described himself as “lapsed.” “I like to live just by human values rather than dogma,” he explained.

But he clarified, “Belief is very important as long as it doesn’t mean that your beliefs are at the cost of alienating or hurting another group. What I am attracted to is the belief system, where there’s moral integrity—and it’s awakened!”

He recounted shooting the Crucifixion scene as an actor playing a centurion and as a human affected by the reenactment of a brutal incident.

“Filming is sophisticated now,” he began. “Often, you don’t see the cameras. The area in which we filmed was very claustrophobic. There was a moment where Clavius rode up on the horse. Cliff was there, and we looked at each other eye to eye.

“Christ or no Christ, there was a man who was being brutally nailed to a cross, dripping with blood. As an actor, you have prepped and alerted yourself to react at a particular level, so you’re going to find that emotional.

“For me [as an actor], it was just another day at the office. I got a split lip. It was hurting me, and I wanted to go home and wash. As the character, I couldn’t give a damn about what was going on, and these are zealots. They are insurgents who need to be quelled. They needed to be taught a brutal lesson—don’t go against the status quo! That’s the character.

“Me privately, Joe, yes. Somewhere deep within me was the other observer who was really moved and found that emotional.”

On a lighter note, Joseph discussed his costume. “How did the Roman Empire take over so much of the world in sandals?” he asked aloud with a smile. “I could barely do it for two months! I had the production buy me trainers, so when we were doing a medium shot and my feet weren’t shown, I could have trainers. But I was in sandals most of the time.

“In a fight scene in the beginning of the movie, it was on an incline on the desert where Clint Eastwood shot all those spaghetti westerns. I cannot tell you how difficult and uncomfortable it was to fight in a gladiator suit and sandals. So, power to the Romans for doing that!”

Incidentally, Joseph stars in another film that’s also being billed as the unofficial sequel to a popular movie. That feature is Michael Parker and Stephen Shin’s “The Last Race,” which dramatizes the life of Scottish runner Eric Liddell (who Joseph plays) after the events narrated in the award-winning “Chariots of Fire.”

Joseph enjoyed telling the story of where he and María Dolores Diéguez, a Swiss model who has Spanish heritage, got married in 2009. “My wife is Catholic. I was baptized a Catholic and lapsed. So, I had to go through a series of tests to ensure that I could get married. I love the Italian bureaucracy on this. I worked as a builder in Italy (Tuscany) before I went to drama school. I worked on an amazing Medici villa that has a chapel. My dream was to be married in that chapel.

“The church said no, that they were not allowing foreigners to be married in that church that sat maybe no more than 15 people. I was disappointed. But they said, ‘But we will allow you in the Duomo, not more than five miles away.’ So, I invited 200 guests to be in a ‘small’ Duomo. I went from a tiny chapel that I couldn’t get, to a cathedral. I love the Italians for that!”

The couple, who split their time between London and Spain, have two daughters, Eva Lucia and Isabel. The dad said the girls enjoy hearing biblical tales. “The stories in the Bible are deeply arresting. As a child, I was deeply moved by the story of Christ. I thought it was an incredible story! My children love it, as well.”