Seamless delineation of humor and pathos in Vilma Santos’ ‘dramedy’ 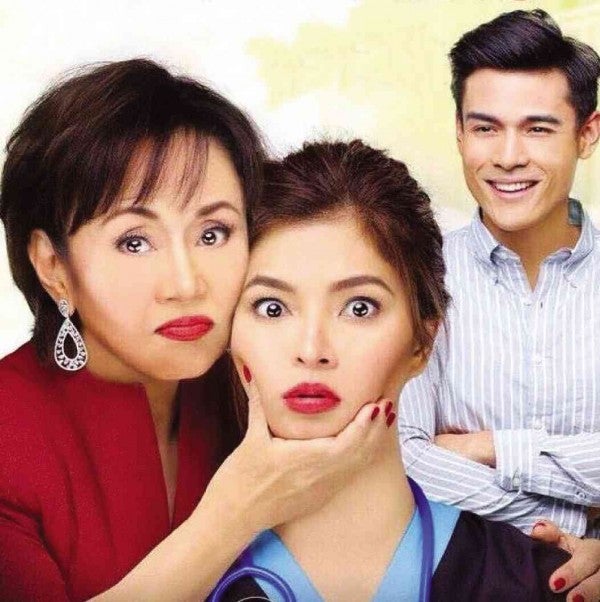 SANTOS, LOCSIN AND LIM. Their film tugs and yanks at viewers’ proverbial heartstrings.

THE CROWD-PANDERING trailer of Joyce Bernal’s “Everything About Her” doesn’t do Vilma Santos—and her immense dramatic gifts—justice. True, the film’s light comedic moments effectively leaven its soggy sequences, and help the production find enough quirks to stave off its predictable development and dramatic contrivances.

But, the much “refined” iteration of Santos’ performance in the movie itself incontrovertibly demonstrates that the Star for All Seasons need not go the Meryl Streep route to deliver a flashy but affection-hooking insight into the heart of an imperfect but well-meaning mother—who wants nothing but redemption! Even without the Miranda Priestly-channeling references, Vilma is her own acting legend.

We’re only on our first month of the new year, but we wouldn’t be surprised if Vilma’s crackerjack turn ends up on top of 2016’s most accomplished portrayals.

The actress plays tough-talking and ball-busting housing mogul Vivian Rabaya, who is forced to make life-altering decisions after she’s diagnosed with an advanced case of bone marrow cancer.

She is respected by her peers but feared by incompetent workers who cross her gilded path. She finds an unlikely ally when she hires 28-year-old nurse, Jaica Domingo (Angel Locsin), to help conceal her dire medical condition from her colleagues. But, Jaica does more than just nursing chores for her hard-to-please boss—she makes Vivian realize that there’s more to living than barking at people to make them toe the line!

No walk in the park

The task of vivifying Vivian’s flaws, idiosyncrasies and well-concealed virtues is no walk in the park, because the world-weary cynic isn’t easy to root for. She’s a woman at odds with herself—and even her estranged only son, Albert (Xian Lim), professes to hate her!

Bernal’s glossy and quick-paced dramedy buzzes with brio and has enough schmaltz to cater to moviegoers who want their quick dramatic fix—but, while it’s true that the film tugs and yanks at viewers’ proverbial heartstrings, Vilma keeps the weepy strings in check as she seamlessly shuttles between winking situational comedy (delivered with flair and spot-on timing) and unflinching pathos. When she writhes in pain, she’ll also make you feel her pain.

The iconic actress embraces her character’s flaws and fortitude with affecting clarity in a superlative portrayal that is passionate but never coercive. Her meticulous insistence on honesty guarantees that no tear is unearned—and no emotion manipulated. So, bring your hanky, because you will need it!

The actress’ thespic stamina holds the film in perfect stasis between comedy and drama—and the emotional segues are well-delineated.

As she copes with the nightmares of her character’s painful past, Vilma’s dramatic choices keep things on an even keel by disallowing emotion-packed scenes to blow up into a long ululation of anguish—a feat in itself!

Angel also comes up with a focused performance that, for the most part, benefits from the film’s propulsive dramatic proceedings. But, the impact of her otherwise empathetic portrayal is deflated by her knee-jerk tendency to “push” her psychological and scenic actions in supposedly kwela scenes as she attempts to break out of the contrived dramatic mold she’s known for.

Xian may not have Angel’s earnestness or Vilma’s finely calibrated bravado, but he is the movie’s biggest revelation. He figures in some of the film’s most gripping dramatic sequences—and delivers his moving moments with aplomb.

It doesn’t hurt that Xian is cast in a role that fits him to a T: Albert is distant, guarded and spiteful, and is armed with an emotional axe to grind!

Bernal makes clever use of those elements to thrust the heretofore phlegmatic performer outside his self-limiting comfort zone.  Result: Xian’s finest portrayal to date!