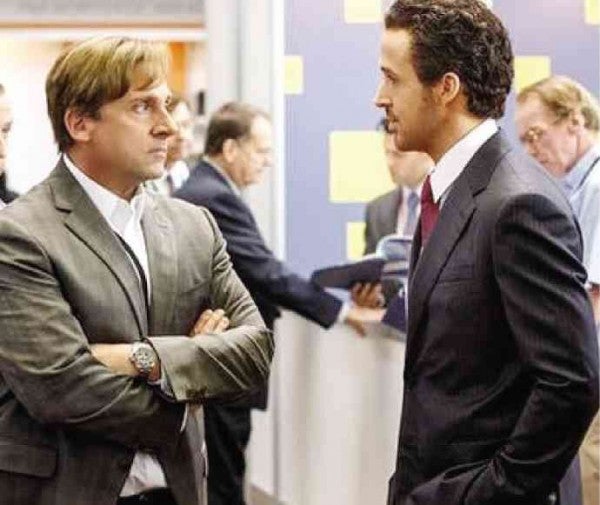 STEVE Carell and Ryan Gosling costar in “The Big Short.”

Inspired by true events, “The Big Short” tackles the grueling details that led to the United States’ financial crisis in 2008, with a powerhouse cast that includes Christian Bale, Ryan Gosling, Steve Carell and Brad Pitt.

In the film by ex-“Saturday Night Live” head writer Adam McKay, a hedge fund investor, Michael Burry (Bale), discovers the faulty housing system and decides to bet against that market. A smarmy trader, Jared Vennett (Gosling) learns of this instability and plans to profit from the situation, which tips off another hedge fund investor, the outspoken Mark Baum (Carell).

The film uses a lot of business jargon that’s guaranteed to make the uninitiated’s head spin, making it difficult to understand crucial conversations. The film, however, utilizes fourth wall-breaking cameos by chef Anthony Bourdain and actresses Margot Robbie and Selena Gomez to explain the Wall Street parlance and acronyms that need clarification.

They’re helpful, yes—but not always. Narrator Gosling is especially effective when he elaborates on the ensuing chaos. He talks about his involvement rather cheekily and sans any tinge of remorse.

The film deals with the details of the collapse that affected millions, but oddly enough, it rarely presents human connections to truly complement the well-written—if sometimes alienating—explicatory scenes.

While Bale plays his character with cool detachment, Carell presents someone more reachable and accessible—as an uneasy insider whose motivations he vivifies with clarity and confidence.

For his part, Pitt’s role is smaller than usual. He portrays Ben Rickert, a retired banker who sees the impending disaster, and who isn’t devoid of some sympathy for its inevitable victims.

The film is subtly acted, and while it’s sometimes quite a challenge to watch, it nevertheless offers a refreshingly sober take on the real-life machinations that resulted in the shocking economic disaster!