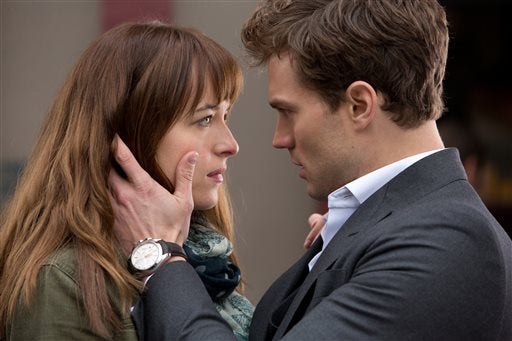 In this image released by Universal Pictures and Focus Features, Dakota Johnson, left, and Jamie Dornan appear in a scene from the film, “Fifty Shades of Grey.” AP

LOS ANGELES— “Fifty Shades of Grey” is all tied up with “Pixels,” ”Jupiter Ascending” and “Paul Blart Mall Cop 2” for the most nominations at this year’s Golden Raspberry Awards celebrating the worst in cinema.

The films led the Razzies lineup Wednesday with six nods each, including worst picture and worst actor for Jamie Dornan in “Fifty Shades of Grey,” Kevin James in “Paul Blart Mall Cop 2,” Channing Tatum in “Jupiter Ascending” and Adam Sandler in “Pixels” and “The Cobbler.”

READ: ‘Fifty Shades’ and sex: Hey, I was expecting worse

The other worst picture nominee is the superhero flop “Fantastic Four.”

READ: Not quite a ‘Fantastic’ reboot

The announcement of the Razzies comes ahead of Thursday’s Oscar nominations.

The “winners” for the 36th annual Razzies will be announced Feb. 27, the night before the 88th annual Academy Awards.

Read Next
Performance of David Bowie musical in NYC becomes a memorial
EDITORS' PICK
Shop smarter with vivo’s big 12.12 holiday deals
House energy committee chair Arroyo bats for cheap electricity
How not to retire as an ex-president
Lawmakers eyeing more changes in Maharlika plan
Hidilyn Diaz wins only gold missing from her collection
The vivo Y02 is now available in the Philippines for only PHP 5,299
MOST READ
Jovit Baldivino, ‘Pilipinas Got Talent’ winner, dies at 29
Andi Eigenmann, family in Manila for a quick visit; Ellie dines with grandma Jaclyn Jose
LPA enters PAR, to likely strengthen into tropical depression in coming days – Pagasa
Lawmakers eyeing more changes in Maharlika plan
Don't miss out on the latest news and information.