Performance of David Bowie musical in NYC becomes a memorial 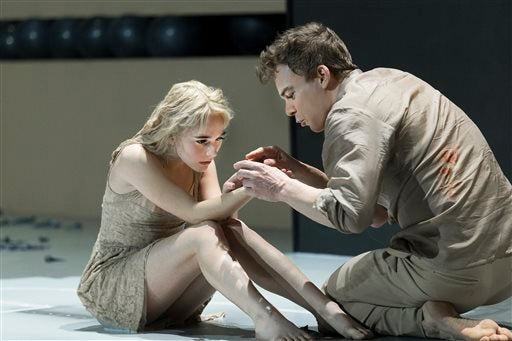 NEW YORK— A performance of David Bowie’s trippy, melancholy musical “Lazarus” turned into a memorial for the Thin White Duke on Tuesday night as fans who had bought tickets to celebrate his music instead found themselves mourning his passing.

“It was incredible. I wept a lot,” said Evan Schwartz, a 20-year-old student from Stanford, Connecticut, who saw the show for a second time after scoring a ticket in an online lottery. “It was beautiful.”

Tuesday night’s performance was the first time since Bowie’s death on Monday that the show went on at the 200-seat New York Theatre Workshop in New York’s East Village. Some audience members left in tears.

Cast members did not acknowledge the death or make any changes to the show. They also declined to comment. The only official nod to Bowie’s death was a video screen in the lobby showing a photo of the musician with the words “In Memoriam, 1947-2016.” Fans left flowers near the entrance.

Starring “Dexter” and “Six Feet Under” actor Michael C. Hall, the musical has been a hit since previews began on Nov. 18. Bowie’s death only made tickets more desired, with a single matinee seat going Tuesday afternoon for $1,900 on StubHub.

Bowie wrote the musical with Irish playwright Enda Walsh as a sequel to the 1963 novel “The Man Who Fell to Earth” by Walter Tevis, which inspired the 1976 film of the same name that he starred in. The musical is directed by Belgian avant-garde director Ivo Van Hove.

Bowie was clearly the draw for Roberta Bethencourt, a New Jersey resident who has been a Bowie fan since she was 12 years old.

“I used to go to the library and when other kids were getting books, I was getting ‘Space Oddity’ and bringing it home and playing over and over again,” she said. “I had no idea what an impact he had on so many people. I loved him because he was so different and unique.”

The 18-songs in the musical include some of Bowie’s biggest hits — including “Changes,” ”Heroes,” ”Absolute Beginners” and “Life on Mars” — as well as new songs like “Lazarus,” taken from Bowie’s latest “Blackstar” album.

The opaque story centers on millionaire alien Thomas Jerome Newton, who Bowie portrayed in the film. Newton, played now by Hall, has imprisoned himself in his own apartment, drinking gin, eating Twinkies, being tormented by his past and watching TV. He cannot leave — or die.

His new assistant gets sucked deeper into his world, Newton is visited by an ethereal girl who creates a rocket ship out of masking tape to take him home, and he’s harassed by an enigmatic, black-clad figure. At one point, the stage is filled with white liquid resembling milk, which some actors bodysurf on. At another, it’s is filled with dark balloons.

The story has a recurring theme of creatures caught between worlds and the exhaustion that comes with daily survival. “I’m done with this living,” a character cries out a one point, in a line that had more depth after Bowie’s passing.

The New York Theatre Workshop, an engine for bold works, has not been immune to tragedy like this. Almost 20 years ago to the day, playwright Jonathan Larson died on the eve of the company’s first preview of his groundbreaking “Rent.”