Lea Salonga to appear in finale of ‘Crazy Ex-Girlfriend’ 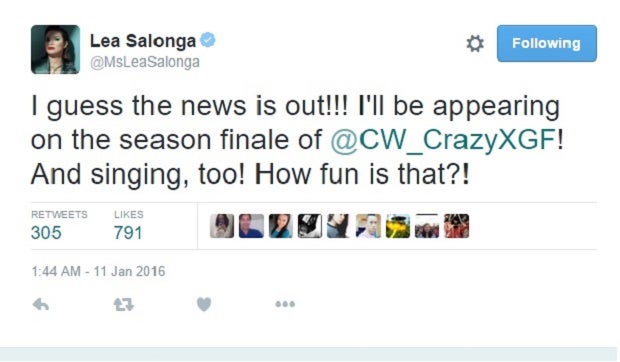 “I guess the news is out!!! I’ll be appearing on the season finale of @CW_CrazyXGF! And singing, too! How fun is that?!” Salonga said on a Twitter post on Monday.

The musical comedy series is currently on its first season.

According to an Entertainment Weekly report, the show’s star Rachel Bloom revealed that Salonga will guest star in the season’s finale.

“One of our characters happens to be Filipino so when we realized no one else had even made the effort to show a Filipino family on an American comedy, it taught me a lot about Filipino culture,” Bloom was quoted as saying in the report.

“It’s also taught me really about how important diversity is, if you want to tell a new story,” the actress added.

Aside from the Crazy Ex-Girlfriend, Salonga is currently a cast member of the Broadway production “Allegiance.” NC/RAM