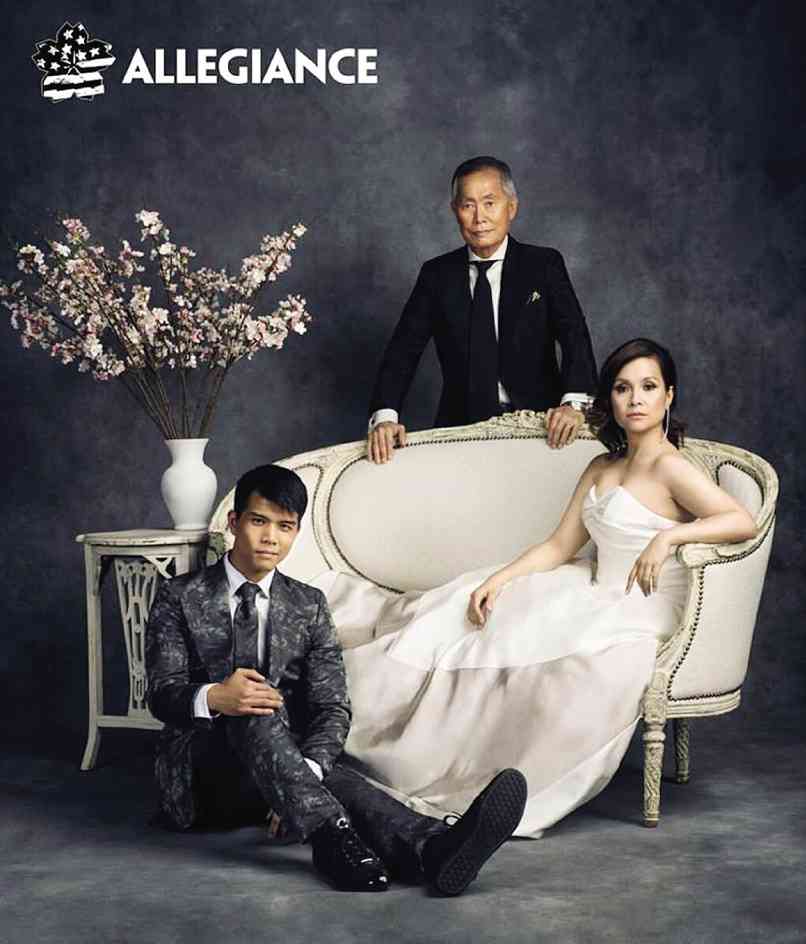 LOS ANGELES—Lea Salonga sings, acts and dances for the first time on Broadway—and kisses her former boyfriend in real life onstage—in “Allegiance.” It’s a triumphant return of the Philippines’ multiawarded international performer to the Great White Way. Almost 25 years since she debuted as Kim in “Miss Saigon,” Lea comes back as a triple threat and does so with aplomb.

Crediting  her “many years of living life, performing all over the world and just being a more fully realized human,” the Tony and Olivier winner looks like she’s having the time of her life on the Longacre Theatre’s stage. Whether spiritedly dancing the swing or belting soaring songs in her solo “Higher” and duets with ex-boyfriend Michael K. Lee, “This Is Not Over” and “Nothing in Our Way,” Lea exhibits maturity in this new chapter in her Broadway career.

The artist who also played Fantine and Eponine in Broadway productions of “Les Miserables” is a performer on top of her game in her sixth visit to the world’s preeminent theater district located in Manhattan.

“Allegiance,” which had its world premiere at the Old Globe Theatre in San Diego, California on Sept. 19, 2012, spotlights a shameful chapter in American history —how the US government rounded up and detained Japanese-Americans in internment camps during World War II.

Marc Acito, Jay Kuo (who also wrote the music and lyrics) and Lorenzo Thione’s book personalized the issue by telling the story of the Kimura family whose life was upended during the war.

The musical, directed by Stafford Arima, was inspired by the experiences of George Takei (who toiled and persevered for many years to make “Allegiance” a reality) as a child living in an internment camp in the swamps of Rohwer, Arkansas.

In the first role that she originates on Broadway since Kim, Lea is Kei Kimura, which she also played at the Old Globe—the sister of Sammy (portrayed by Telly Leung and George in his younger and older years, respectively) whom she helps raise when their family is detained in a camp in Wyoming.

All bundled up after a recent preview performance, ready to meet the fans who have been excitedly waiting outside, Lea met us backstage. She looked flushed from the standing ovation and cheers that she and her “Allegiance” castmates—including George, Telly, Katie Rose Clarke, Michael, Christopheren Nomura and Greg Watanabe —had just received.

When Lea, beloved to this day as the singing voice of Jasmine in “Aladdin” and the title character in “Mulan,” stepped out of the gates, the assembled crowd broke into cheers. Trailed by a bodyguard, the judge-coach of the Philippines’ version of “The Voice” and “The Voice Kids” signed autographs and posed for pictures. Even Ligaya, who stood by and was patiently waiting for her famous daughter, was besieged by fans.

“Allegiance” preview performances are ongoing with the official opening night set on Nov. 8. More information is available at www.AllegianceMusical.com. 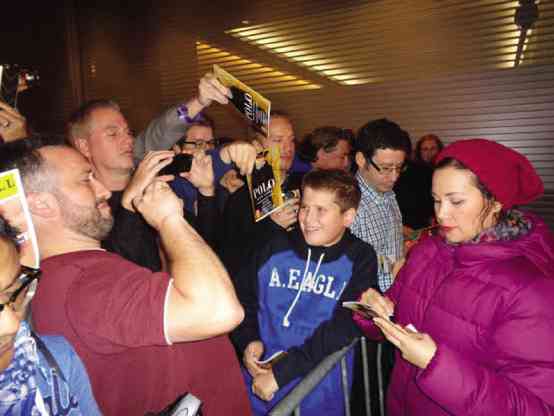 LEA MEETS fans at the stage door after a performance. Photo by Ruben V. Nepales

The following are excerpts from our interview with Lea, who lives in Manila with her husband, Japanese-Chinese-American Rob Chien, and their 9-year-old daughter, Nicole.

How different are you from the Lea who appeared onstage at the Broadway Theatre for the first time in 1991?

I’d like to think that because of the last many years of living my life, performing all over the world and just being a more fully realized human, how I approach my work when creating a role is different. I’m more apt to argue and stand my ground than when I was 19 or 20, when I felt my job was to just do what I was told and sing as well as I can.

Now, I’m more open to discussing, arguing, fighting for something I believe in, as long as it’s all in the spirit of collaboration. And thankfully, the environment “Allegiance” fostered was a safe one for all of that.

You do a full on dance in this play. How do you prepare and sustain the energy that’s required by this role?

I just think it’s funny that only now do I get to sing, act and dance… at the age of 44! It’s crazy! All I could do to prepare was to just rehearse all the choreography and do it over and over. Many hours of clean up and self-practice…  and making sure I eat just enough for the show.

For the benefit of George’s fans, what’s he really like as a person?

He is one of the most charming and intelligent and funniest people I’ve ever met. The wide vocabulary, that distinctive voice and his laugh! His presence can fill any room and it does.

How does George, a pioneering Asian-American actor, inspire you since you yourself blazed the trail for Filipino talents on the global stage?

I don’t think about whatever I’ve done when I’m in the room with him because he truly was one of the very first who blazed the trail for the rest of us. Being around him is so special, and the impact he’s had… given how many Asian actors there are in the show… it’s safe to say our careers are possible due to people like him. Imagine George making his Broadway debut at the age of 78.

How does “Allegiance’s” story of racial discrimination and segregation resonate with you as an Asian performer and person?

First, the discrimination. After I won my Tony award, I thought things would be easy as far as finding work was concerned. I was wrong. I’ve been told that I couldn’t audition for roles because of my race. The awards couldn’t help in that department which was eye-opening.

I’m thankful to Cameron Mackintosh for taking that chance on me, casting me as Eponine and later on, as Fantine. He saw my talent and not the color of my skin.

Second, because I’m married to a Japanese-American, doing “Allegiance” is more personal than any other Broadway show I’ve done. The stakes are so much higher because this is part of my husband’s and daughter’s history. This is something I need to do for them.

How has “Allegiance” evolved from its original run in San Diego to Broadway?

Oh… it has grown by leaps and bounds. So many songs were thrown out since then while new ones were written during the last New York lab in 2013 and for the Broadway production in 2015. Jay Kuo was obviously very busy. Kei also becomes a more active participant in the resistance movement and many of the revelations made during the end of the San Diego version are clarified.

We also now have a brand-new finale. We are on Week 3 of previews which means another week of changes.

Do you and George compare notes about tweeting and posting on Facebook?

Actually, we don’t talk about social media very much when we’re together.

It’s much easier than anyone would think! Michael and I have only the deepest respect for one another. We dated about 15 years ago so our relationship is ancient history. We’re in “Allegiance” as actors and professionals and approach it as such. But we do have a lot of fun working together and our chemistry is genuine. There’s plenty of trust that goes between us and ultimately that’s what chemistry is. We watch each other’s back. That’s important for a tandem to work.

Can you talk about how your fan base hasn’t stopped growing over the years?

Needless to say, I’m very grateful for the love being showered on the show and on all of us.