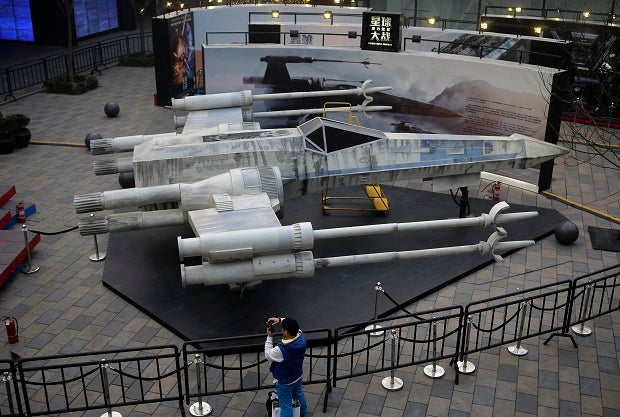 A Chinese man takes a picture near a model of Star Wars’ X-wing Starfighter on display at the Sanlitun Village shopping mall to promote the movie “Star Wars: The Force Awakens” in Beijing, Tuesday, Dec. 29, 2015. The latest Star Wars movie broke the $1 billion mark before fans in China could see it, but producers anticipate “The Force Awakens” will play “very very well” in the world’s second-biggest film market. The movie opens in China on Jan. 9. AP

BEIJING — The record-breaking “Star Wars” has opened in China, where it is far from certain to draw in enough movie-goers to knock off “Avatar” as the world’s all-time biggest grossing movie.

“Star Wars: The Force Awakens” is the highest ever grossing film in the North American market, where it was released three weeks ago.

But internationally, it still has a long way to go to beat “Avatar.” On Saturday, the international box office of the latest “Star Wars” movie stood at $1.6 billion. “Avatar” made $2.8 billion.

Not many Chinese are familiar with “Star Wars.” The franchise’s three prequel films released from 1999 to 2005 were shown in China, but at a time when there were much fewer screens in the country.