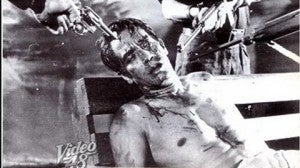 (Editor’s Note: The author is the archiving officer of the new National Film Archive of the Philippines.)

The Philippines was the last country standing without a national film archive—until today, in time to celebrate the United Nations Educational, Scientific and Cultural Organization (Unesco) World Day for Audiovisual Heritage.

Yet, Philippine cinema can lay claim to having produced some 8,000 or so films since its birth in 1919. But of that figure, the painful truth is that only 3,000 of those titles can be considered extant while the rest, regrettably, are irretrievably lost—never to be seen by current and future generations of moviegoers.

For example, if one wanted to view the works of National Artist for Film Gerardo de Leon, the tragedy is that practically the whole of his filmography is all but gone. One of the very few that remains, “The Moises Padilla” Story from 1961, is in dire need of restoration.

To make matters worse, a lot of the other films that still do exist are already in advanced stages of deterioration (technically called vinegar syndrome) as these are held and kept by different institutions—cash-strapped and with limited resources—in conditions that are, in most cases, lamentable and far from ideal.

There has long been a clamor for the establishment of a state-run and -initiated film archive that shall serve as a repository of our rich cinematic heritage. An attempt was actually made in the past with the Film Archives of the Philippines (FAP) in 1982 under the Experimental Cinema of the Philippines (ECP).

This was housed in the basement of the Manila Film Center which, in hindsight, and if we are to follow strict archiving procedures, was not a suitable location due to its proximity to Manila Bay and its corrosive seawater.

A flood also hit the basement, inflicting damage to the films in storage. And since it was a project under the Marcos regime, it was quickly dissolved in the wake of the 1986 Edsa People Power Revolution.

As a result, the films that were under the safekeeping of the FAP moved from one place to the next: from the Movie and Television Review Classification Board (MTRCB) to their present location at Mowelfund, where they have since been in storage.

A feasibility study was later drawn up in the 1990s identifying Makiling as a target site but, unfortunately, this never went past the drawing board.

In 2002, Republic Act No. 9167 created the Film Development Council of the Philippines (FDCP) under the Office of the President. Among the powers and functions of the agency was to “ensure the establishment of a film archive in order to conserve and protect film negatives and/or prints as part of the nation’s historical, cultural, and artistic heritage.”

However, since the FDCP’s inception, this part of its mandate has never actually been fulfilled—until now.

Under the leadership of filmmaker Briccio G. Santos, who was appointed chairman of the agency by President Benigno Aquino III last year, the FDCP is taking steps toward this end with the creation of the National Film Archive of the Philippines.

An interim clearinghouse has started operations in Ortigas—with 24/7 climate control and a small team of personnel manning it—as construction for a more appropriate facility in the Cubao area is underway.

Forming its initial holdings are films from the National Historical Commission and the University of the Philippines Film Institute. Acclaimed filmmaker Mike de Leon has also donated a handful of films including a print of “Bayaning Third World,” while Sampaguita Pictures Inc., which formed part of the so-called Big Three film studios, has also recently entrusted its output to the archive.

To commemorate the launch of the archive in December, a special screening of a new, digitally remastered 35mm print of Ishmael Bernal’s “Manila by Night” as well as the Luis Nepomuceno-produced, and Eddie Romero-helmed “Manila: Open City” will be held.

Another component of FDCP’s initiatives is the opening of cinematheques (film archives with small cinemas) across the country, with Casa Vallejo in Baguio City serving as the pilot site. An additional three are slated to open in Davao, Iloilo and Marawi.

To be screened in these cinematheques are cinematic classics, contemporary releases, indies, animation works, among others. The National Film Archive, as soon as it is institutionalized, will inevitably serve as the content source for these venues.

While the action being taken by the FDCP is welcome news, and we must laud its chairman for his gallant efforts, challenges still lay ahead.

The council has made known its intent to erect a bigger, more permanent film archive, possibly in Tagaytay City, and this is expected to entail a sizable amount of money.

As such, the much-needed political will, coupled with the full budgetary and legislative support from Congress, is imperative. A bill is being pushed wherein movie producers shall be mandated to deposit copies of their films to the archive.

The agency is also proposing an executive order that will compel all major government institutions maintaining any film collection to turn over their holdings to ensure their protection.

In light of all this plus the amount of work needed, the participation of the film industry and all stakeholders is crucial.

As we celebrate on Wednesday Unesco World Day for Audiovisual Heritage with its theme “Audiovisual Heritage: See, Hear and Learn,” let us remember the importance of audiovisual documents, why they must be preserved, and how they form a key part of our identity as a people and a nation.