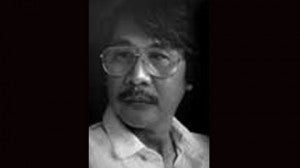 Salvador Bernal, National Artist for theater design, whose groundbreaking work for the Philippine stage earned him the title “Father of Philippine Stage Design,” has died. He was 66.

Bernal died peacefully in his sleep at noon Wednesday at the St. Luke’s Hospital, from a cardiac arrest brought about by a diabetic condition, according to Ma. Teresa Rances, a close friend and former colleague at the Cultural Center of the Philippines (CCP). He survived a stroke a few years ago.

Bernal, who was conferred the National Artist Award in 2003, produced a brilliant body of work which has enriched Philippine theater, music and dance.

He was born on Jan. 7, 1945 in Dagupan City and earned a philosophy degree in 1966 from the Ateneo de Manila where he would later teach literature and stage design.

Starting in 1969, Bernal designed more than 300 productions for drama, musicals, operas and concerts. He was known for using indigenous and locally available materials for his stage designs, such as bamboo, abaca fabric, twice-raw hemp and rattan chain links.

He joined the CCP in 1987 as director for production design, later founding the CCP’s world-class Production Design Center.

Among his groundbreaking designs for the theater was the sets he did for  “Dalagang Bukid” by Hermogenes  Ilagan, where he recreated prewar Manila rendered in Art Nouveau, complete with a full-scale, working tranvia.

Before his death, Bernal was working on the design for “King Lear” with the Philippine Educational Theater Association (Peta).

Bernal organized the Philippine Association of Theatre Designers and Technicians (Patdat) in 1995, through which he introduced Philippine theater design to the world.

The book “Salvador F. Bernal: Designing the Stage” by Nicanor G. Tiongson, is a comprehensive review of Bernal’s work as designer for theater, with over 200 full-color photographs of his sketches, models, and actual costumes and sets complementing the text.

His remains lie in state at the Immaculate Concepcion Cathedral in Cubao. Necrological services will be held at the CCP Main Theater on Saturday, October 29, at 9 a. m. Ige Ramos, Contributor