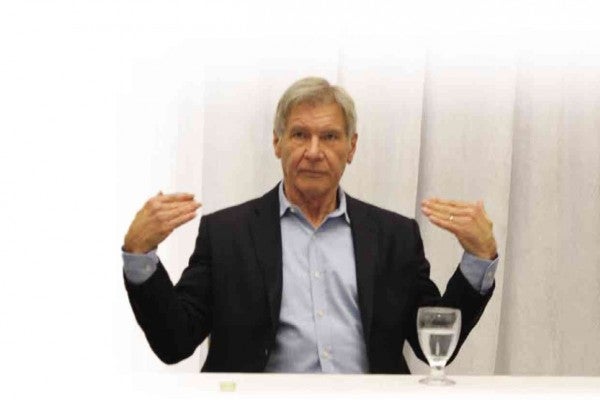 Ford wanted Han Solo to have a purposeful addition to the film.

Harrison Ford displayed his famous dry wit and humor in our recent interview. Known for keeping a straight, sometimes dour, face when he cracks jokes, the actor oftentimes keeps his listeners wondering if he’s being serious or not.

At the time of our chat, we haven’t seen “Star Wars: The Force Awakens” (we have watched it since then). “You haven’t seen the film?” he asked. “Well, I will act it out for you. In the film, there’s a character called Ham Yoyo. I don’t play him.”

In the following excerpts from our conversation, keep in mind that Harrison was often speaking in a wry vein.

Obviously, you didn’t need the money.

I don’t think that’s obvious for me. I did it as usual—for myself. Because it was a very good script, and it was a great use of the character. And I have a terrific director whom I have long admired and been friendly with. Besides that, I didn’t have a job. So, it was easy. I slotted it in and I was delighted to do it.

The only reason that you might suspect that I might not be happy to do it would be on the basis of statements I made 25 years ago, that I was tired of putting on that costume. But it’s like 25 years later, there it is in the back of the closet, and it’s got a nice look to it! I will try it again.

And I did say that I wanted Han Solo to die in the original. That wasn’t because I thought I didn’t want to play the character, but I didn’t anticipate at that point that there would ever be another film and there were only the first three.

I wanted the character to have some purposeful addition to the film. So, I thought it would be great if the most cynical were converted to the belief in the Force or the goodness of the mission of the heroic characters. And he would sacrifice himself and lend some gravitas to the enterprise. George (Lucas) said no.

You play two of cinema’s most popular characters, Han Solo and Indiana Jones. What do you think these two figures have in common?

But in other ways, they’re very dissimilar. Indiana Jones is a professor. One of the things that I have always found interesting about him is that he was an academic and an adventurer. He was a member of the intellectual class, yet he was also an adventurer!

They are both interesting characters. I’m delighted to have the opportunity to play both of them. And obviously, they both came from the fervid imagination of George Lucas.

Do you still connect with Han Solo?

It’s interesting that the character was written to be consistent with the character that we have met years ago. But he’s like a bigger tree. There are more rings in the trunk. Han has had more experience. That should be apparent, if I have done my job in any way correctly. He has had experiences that have changed him and which we will reference in the telling of the story.

Is your family also getting caught up in the “Star Wars” excitement?

No. My kids are interested, but not so much. My 14-year-old loves to watch Hercule Poirot or Sherlock Holmes more than he likes science fiction.

You are the lead star of a big movie. What’s your life like in the past few weeks?

People are a lot more excited to see me and to know that the film is coming than they were about “Hollywood Homicide.” So, it’s been gratifying to get out there, and the people are pretty enthusiastic about knowing JJ’s capacity and Disney’s investment.

I don’t mean just money, but knowing the quality of George Lucas’ original vision and the opportunity to reinvent the whole—meshugaas (craziness)—I think is the right word. It’s exciting. It’s good, so I am not cynical about it at all. I am very happy to be involved.

Do you feel any pressure?

Pressure? (He pretends to yawn.) Yeah.

What are your earliest memories of JJ Abrams who wrote “Regarding Henry”?

We were working on the script—all of us together—Mike (Nichols, director), me and the kid (JJ). He was about 23 years old when we met professionally. He was brilliant, funny and great to work with, then and now.

So, JJ hasn’t changed at all?

He’s much, much older. He certainly let himself go. He’s got his hair. So do I.

John Boyega said that you teased each other a lot.

John pretends that he’s my best friend. Not so much.

Do you still fly planes?

I just crash them. I don’t fly them. I just take them out in front of the hangar and drive old cars into them. Yes, I fly. I started flying as soon as I could get in my helicopter. I had a cast on my right leg, but my toes were hanging out, so I could put my toes over the antitorque pedals and fly. I have been flying ever since.

But did you make changes in the way you fly, like take extra precaution? Any changes because of that (crash)?

Not much. Maybe I am stupid, but I haven’t changed anything. And I still love flying! My wife (Calista Flockheart) knows how much it means to me and supports me.

What would you like to have more time for at this point in your life and career?

I would like to travel more. In this movie business, you go to a lot of places. But when you get up in the morning, you go to work, and you don’t really experience a place.

I would like to fly to places in airplanes that I have not flown before. I have traveled a lot in my free time, but it’s a big world. I want to see it with my kids. We have to work around school and things like that.

Any clothes that you are attached to in your closet?

I have this thing in my contract that says that any clothes that I wear in the movie that are made for me, go home with me. So I have closets full of 30-year-old suits. I can’t throw them away because they still fit. But I don’t need them. I need three suits; I don’t need 30 suits.

I just don’t have time to try on all these clothes that have been coming in boxes at the end of a movie. I have no clothes from “Star Wars” and “Indiana Jones,” but I have done a lot of movies where Mr. Armani or some other very nice tailor has made me some nice suits. But I don’t need them anymore.

What do you think is the future of cinema?

I think we are going to get back to wanting community experiences. For me, the virtue of a movie theater is that you are in this room with strangers who have been drawn to that dark room with a real good sound system, because they want to have an experience.

The light goes out and this powerful medium has a chance to hold sway over many different kinds of people.

The great part about it is that there is a feeling of common humanity. We don’t get that in the world of small devices. So, what I love about movie theaters and seeing a movie in a theater is the sense of community that you have there. I hope we will have that.