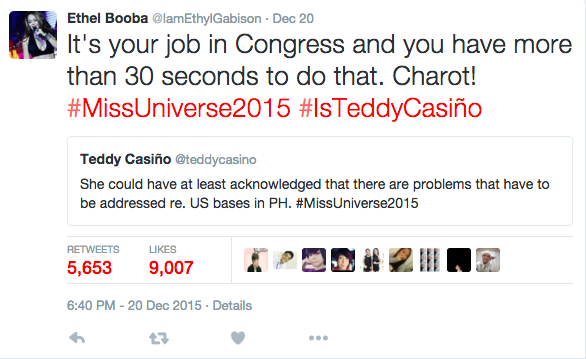 Comedienne Ethel Gabison, more known by her stage name “Ethel Booba,” has made a viral riposte to the remark of a leftist leader who did not agree with the answer of Miss Universe 2015 Pia Wurtzbach on the reopening of US military bases in the country.

During the question-and-answer portion on Monday (Philippine time), Wurtzbach said she welcomed US presence in the country, citing the long-standing relationship between the two nations.

“I don’t see any problem with that,” she said.

This response did not sit well with former Bayan Muna Rep. Teddy Casiño who tweeted: “She could have at least acknowledged that there are problems that have to be addressed re US bases in PH.”

Gabison quoted Casiño’s tweet, saying he should have done what he suggested while he was still in Congress.

Casiño was the representative of militant Bayan Muna party-list from 2004 to 2013. He ran for senator in 2013 but lost.

“It’s your job in Congress and you have more than 30 seconds to do that. Charot! #MissUniverse2015 #IsTeddyCasiño,” the comedienne said.

The comedienne also posted another tweet which said Wurtzbach’s bid for the crown was not meant to please activist groups.

“Pia Wurtzbach was there to win the crown of Miss Universe 2015 and not to please the activist groups. Charot!” she said in a separate tweet.

Casiño’s supporters reacted on various social media platforms, saying the former legislator had been doing his job in exposing the problems between the US and the Philippines as he had been active in defending the country’s sovereignty through assailing the Enhanced Defense Cooperation Agreement and the Visiting Forces Agreement. AJH/RC