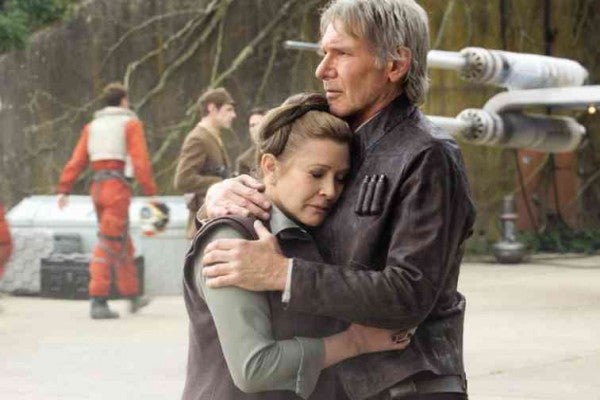 “With final numbers now in, ‘Star Wars: The Force Awakens’ rose above estimates to post an all-time industry-high $248 million domestically plus $281 million internationally for an all-time record global debut of $529 million since opening December 16,” the company said in a statement.

It said the figure does not include box office receipts from India and Greece, where the movie opens this week or from China, the world’s second biggest film market where it opens on January 9.

“Our sole focus has been creating a film that delivers that one-of-a-kind Star Wars experience, and director J.J. Abrams, Lucasfilm President Kathleen Kennedy and the Lucasfilm team have outdone themselves,” Disney chairman Alan Horn said at the weekend.

The highly anticipated seventh installment of the space saga has blazed a record-setting trail since its domestic debut last Thursday, taking the prize for highest-grossing domestic opening night with $57 million and biggest domestic single-day sales Friday with $120.5 million.

‘Power of the force’

“Harry Potter and the Deathly Hallows: Part 2,” previously held both records at $43.5 million for an opening night and $91 million for a first day.

As far as all-time box office sales, two films by James Cameron hold the record — “Avatar” ($2.78 billion) and “Titanic” ($2.18 billion), and it is expected that “The Force Awakens” might unseat both.

“‘Star Wars’ is officially the biggest thing to happen in the known box office universe now that it has taken the best debuts records — domestic and worldwide — from ‘Jurassic World’,” said Jeff Bock, box office analyst at Exhibitor Relations.

READ: ‘Star Wars: The Force Awakens’ is a return to what makes film great

“The industry is expecting amazing holds this upcoming weekend and through the holidays, and if that happens, ‘Avatar’ and its records may be the next thing to fall in the face of the power of the force.”

Disney said the galactic success of the movie has already enabled the company to cross the $5 billion mark in global box office receipts in a calendar year for the first time ever, surpassing the previous record of $4.73 billion set in 2013.

“The Force Awakens” picks up the intergalactic story of good versus evil 30 years on from “The Return of the Jedi,” the last episode of the original trilogy.

The trio of heroes who appeared in the first of the blockbusters in 1977 — smuggler Han Solo (Harrison Ford), Princess Leia (Carrie Fisher), leader of the rebel alliance, and her twin brother Luke Skywalker (Mark Hamill) — are all back and played by the actors that “Star Wars” first made famous.

Also debuting at the box office in the top 10 this weekend were four other films, whose numbers seemed miniscule compared to the “Star Wars” hauling.

The animated “Alvin and the Chipmunks: The Road Chip,” came in second place in its first weekend, with $14.3 million, according to box office tracker Exhibitor Relations.

In third and also in its debut weekend was “Sisters,” starring Tina Fey and Amy Poehler as two siblings throwing one last party in their childhood home before it is sold. It earned only $14 million.

“The Hunger Games: Mockingjay — Part 2,” the fourth and last movie in the blockbuster franchise that turned Jennifer Lawrence into a Hollywood megastar, earned $5.7 million, falling to fourth place in its fifth week in theaters.

Meanwhile “Creed,” a next-generation version of the “Rocky” series earned $5 million in its fourth week on the big screen.

Box office receipts for the rest of the top 10 were as follows: