The Force is strong with new ‘Star Wars’ 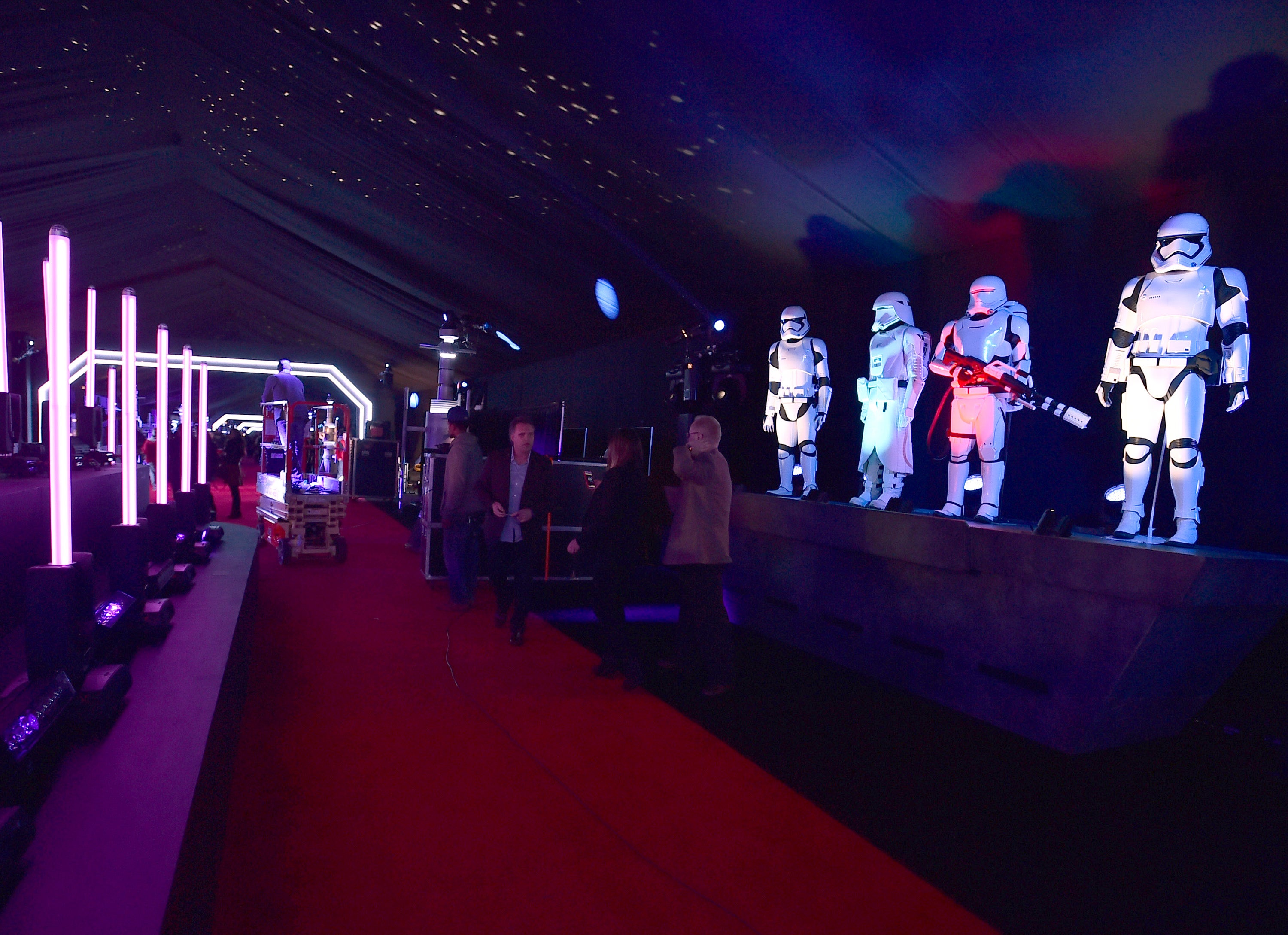 A view of Stormtroopers on the red carpet before the world premiere begins for “Star Wars: The Force Awakens” at the TCL Chinese Theatre on Monday, Dec. 14, 2015, in Los Angeles. AP

PARIS—It may be one of the most hyped films of all time, but “Star Wars: The Force Awakens” opened on Wednesday to ecstatic reviews from both fans and critics.

Fans who had waited a decade for the next episode of the space saga emerged from the first screenings in France and Scandinavia clearly moved, with some even in tears.

“I was happy to see Luke Skywalker again,” Suzanne Sundsvall, 55, cried as she left a cinema in the center of the Swedish capital Stockholm.

“I’ve lived with the character Han Solo since the first movie, when I was 17. I even have a Han Solo car license plate,” she said.

Others who had flown halfway around the world to see the movie in Paris two days ahead of release in the United States, said it had been worth “every cent” of the cost.

A smiling Tim Mersch, 44, from Las Vegas, who had spent “several thousands dollars” to see the film early, said it had breathed new life into the franchise.

“I just want to see the next one now,” he said.

“The Force Awakens reawoke my love of the first movie and turned my inner fanboy into my outer fanboy,” wrote The Guardian’s critic Peter Bradshaw.

“There are very few films which leave me facially exhausted after grinning for 135 minutes, but this is one,” he added.

In honor of the film’s release, Nelson’s Column in London’s Trafalgar Square was lit up with the image of a lightsaber on Wednesday night, while Star Wars creator George Lucas took to the red carpet in Leicester Square for the European premiere.

“All of the premieres have always been in London. It’s like coming home to an event we’ve done for the last 40 years, but this was the biggest by far,” Lucas told the host.

“The Force Awakens” includes a host of fresh talent, among them British actors John Boyega as Finn and Daisy Ridley as Rey, who were praised in Parliament by Prime Minister David Cameron on Wednesday.

After months of teaser trailers that raised more questions than answers, there were fears the seventh film in the series might disappoint.

More than half a million people prebooked tickets in France alone for director J.J. Abrams’ two-and-a-half-hour epic, which goes back to the story’s roots.

Box-office records are also expected to tumble in the Netherlands, South Africa and Thailand, where the film also opened ahead of its US launch.

“The Force Awakens” picks up the intergalactic story of good versus evil 30 years on from “The Return of the Jedi,” the finale of the original trilogy.

Luke Skywalker, the last Jedi master, has disappeared and Princess Leia, now a general, sends fighter pilot Poe Dameron to save him from the evil First Order.

Dameron fails to find Luke but gives his robot BB-8 a map showing how to reach him. The film turns on the robot’s adventures as he tries to get back to Leia, helped by Finn, a Stormtrooper who has turned his back on the Dark Side, and young scavenger Rey.

The trio of heroes who appeared in the first of the blockbusters in 1977—smuggler Han Solo (Harrison Ford), Princess Leia (Carrie Fisher), leader of the rebel alliance, and her twin brother, Luke Skywalker (Mark Hamill)—are all back and played by the actors that Star Wars first made famous.

Disney, which bought the Star Wars franchise from its creator George Lucas for $4 billion in 2012, went to extraordinary lengths to keep the plot shrouded in mystery.

The secrecy prompted some criticism of the film’s fearsome publicity machine.

Greg Grunberg, who plays an X-Wing pilot, told Entertainment Weekly such was the security on set that actors only got their lines the morning their scenes were being filmed.

Why we love ‘Star Wars’